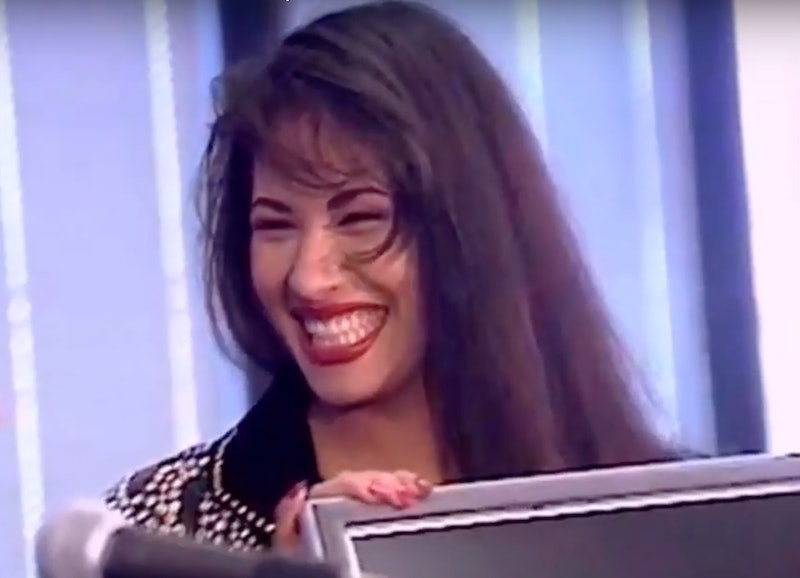 For as long as I can remember, I listened to Selena Quintanilla. The late Tejano singer's music was always playing in my house; she was the voice of my childhood, her songs ingrained in my brain. While time has passed (the 24th anniversary of her death is March 31 and the 22nd anniversary of the film Selena is March 21), Selena's legacy is stronger than ever, and as a lifelong fan it's a beautiful thing to see people still adore and celebrate the iconic performer. However, it's also followed with the nagging reminder that Selena had so much left to accomplish, which is why it's also so painful to be a fan.

I was born in 1995, the year Selena was killed by Yolanda Saldívar, so my memories of the singer are comprised of her songs, the film about her life starring J. Lo, and now — with the help of technology majorly advancing since the mid '90s — YouTube videos of interviews she'd done. Even with her image and voice so tangible I've never been able to live in a world where she exists. But while she was alive, Selena made a name for herself as "La Reina de Tejano," or the Queen of Tejano music. The "Tex-Mex" music she became so famously known for is a genre that, before her breakthrough in 1989 when she signed with EMI Latin and released some of her first big tracks like "Baila Esta Cumbia" and "My Love," was male-dominated, a genre where women weren't taking up a ton of space.

At only 23 years old, she rose above that expectation and accomplished so much as a Latina in the music industry. "Tejano music was hard for us because I was a girl," she once said in an interview with Orale Primo in 1994. "My dad had a lot of problems while trying to set up shows for us or presentations because there are a lot of men who don't think that women can get the attention of the public. But... wrong!"

In 1994, Selena won a Grammy and was on the precipice of stardom. She was so close, so close, but yet, it was all cut far too short. She was in the middle of recording her first English crossover album which was released posthumously in July 1995 when she was murdered by Saldívar, her fanclub president on March 31, 1995. Saldívar was found guilty of first-degree murder in October 1995 and received a life sentence in jail, with possibility of parole in 2025.

When she died, Selena was not only in the prime of her life but also the prime of her career. While she had a massive following in the Tejano and Cumbia genres — which even spilled out to more mainstream audiences — she was about to make a huge step into mainstream pop by releasing English-language songs. You probably know "Dreaming of You," the title song off the album that was released after her death. It peaked at 22 on Billboard's Hot 100 and the San Antonio Express-News reported, "Selena has become the fastest-selling female artist in music history," noting that Dreaming of You (the album) outsold artists like Janet Jackson and Mariah Carey at the time.

Posthumously, Selena continues to make an impact. For example, the new Forever21 collection celebrating Selena proves that someone who died before many of the store's shoppers were even alive can still resonate so much with that demographic. It also shines a light on how we can continue to reintroduce Selena to new and younger generations, through fashion and accessories, but also by sharing her music and videos.

I know that can happen with younger generations because it happened with me. When I was five or so, I had my mom buy me a little bralette from the store and wore it with my PJs, because of Selena's famous bustier look, or "busti-caca" as her dad (played by Edward James Olmos) called it in Selena. I would blast one of her CDs on my karaoke machine and belt out what little Spanish I knew (which I had learned from her songs) and think maybe she'd be looking down on me, proud of what I was doing. At that time, I sort of understood what death was even though I hadn't experienced it in my own life. I thought maybe because she was so important to me, she'd happen to catch a glance while starring down from heaven. Again, in this five-year-old's mind, this made sense.

As I grew up, I understood more of what her loss meant. I started to actually grasp the concepts in the movie, and how she was more like me than I had known. She also didn't learn Spanish growing up and couldn't speak it fluently, even though she was Mexican-American, similar to me and my siblings. Her father's speech in the movie resonated with me because it was almost an exact sentiment my grandfather and father had told me as a child.

Her legacy and memory is very prevalent now that I'm older. Whether it's Cardi B rapping about her, Kacey Musgraves singing one of her songs, or other celebrities like Brie Larson posting on Instagram about her, the visibility Selena has 24 years after her death is astounding.

Certainly this mainstream exposure of Selena helps keep her memory alive, but she's had that power all on her own. To me, her appeal comes from her being relatable — I didn't know anyone else who had a similar Mexican-American upbringing. I was able to see myself in her, even after she was gone.

Of course, there's also her voice. Not to mention the charisma she had in her performances, her vibrant and infectious melodies, and her spirit. Her smile is one of those that you can always remember and count on to brighten your day.

It still surprises me when people don't know who Selena Quintanilla is, but it also gives me the pleasure to be able to tell them of her genius. Selena will always be in the memories of her countless fans, including myself, with a quick belting of "Tu Robaste Mi Corazón" or "Si Una Vez," or one of her more well-known songs like "Como La Flor." She'll always be La Reina, and nothing will change that. Even with the pain of her passing still hurting more than two decades later, she made her beautiful mark on the world, and if we do it right, she'll be able to continue to make that mark for time to come.