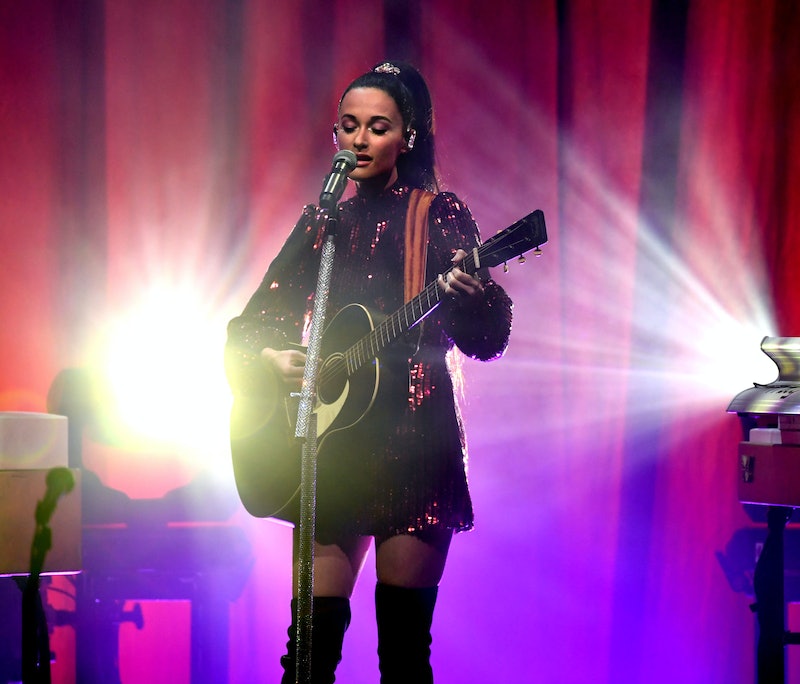 "Oh, What A World" may be a song title off of Kacey Musgrave's 2018 Grammy-winning album, but it's also a phrase that you'll probably sigh contentedly to yourself today after hearing about the country singer's latest viral performance. On Monday night, Feb. 25, Kacey Musgraves performed a tribute toSelena Quintanilla-Pérez, singing "Como La Flor" during her concert at the Houston Rodeo in Texas.

On Sunday night at the Vanity Fair Oscars after-party, Musgraves told Entertainment Tonight that she'd looked forward to being in Houston because of Selena. "That was where Selena had her last concert," Musgraves said. Technically the Houston Astrodome, where Selena performed in '95, is adjacent to the NRG Stadium, where Musgraves performed on Monday, but it's all literally in the neighborhood. The fact that Musgrave's tribute fell on the night before the 24th anniversary of Selena’s last concert makes it seem like the stars were aligned for this incredible performance to take place.

Earlier on Monday, Musgraves posted a picture of Selena on her Instagram stories, which, paired with her interview from the night before, should have clued her fans into a potential tribute performance. Despite her clue-dropping, though, fans attending Musgrave's performance in her home state on Monday seemed generally shocked when Musgraves broke out into "Como La Flor," or at least that's what it sounded like in videos posted to Twitter. Many who attended the performance shared videos of Musgraves singing Selena's 1995 song, sharing their excitement and surprise over the unexpected Latin song being performed by a country music star.

One of the most exciting reactions came from Selena's sister, Suzette Quintanilla, who shared a video of Musgraves singing the somewhat twangy version of the classic. "Awww this makes me wanna shed a tear! Takes me back," Quintanilla captioned the video on Instagram. Then she tagged Musgraves and wrote, "A Big Big Thank you @spaceykacey [Musgraves] for the love at the Houston Rodeo tonite with that SELENA Y LOS DINOS Jam!"

Suzette Quintanilla's approval was largely echoed by Selena fans, some of whom dubbed the Golden Hour singer "Kacey Guadalupe Margarita de la Musgraves" on Twitter. Even if a country music singer whose Instagram bio reads "properly yeehawing since 1988," isn't the first singer who would come to mind as someone to cover Selena, Musgraves clearly made the late singer's massive fan-base happy.

Many fans even used Musgraves own hilariously meme-able reaction from winning Album of the Year at the 2019 Grammys earlier this month to convey their own feelings about the "Como La Flor" performance.

As if Musgraves fans couldn't love their yee-haw queen any more, the performance of Selena's song probably secured her a place in many fans' hearts. "Como La Flor" was an extra special song for Musgraves to perform, seeing as Selena's 1995 performance of the song — wearing her iconic sparkly purple jumpsuit — remains one of the most well-known of the Astrodome show.

Thanks to artists like Musgraves, Selena's legacy will live on for eternity, just as it should.