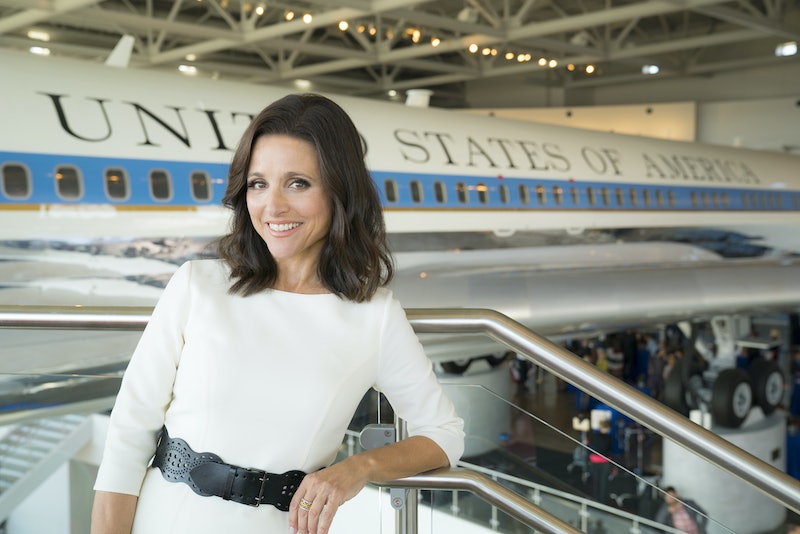 One year after losing the presidential election to Laura Montez, things are really not going well for Selina. In the season premiere, her plan to run for president again was shot down by everyone (except Gary, of course), so now she's moved on to a new goal: the creation of The Selina Meyer Presidential Library on Veep. "You know why I'm the only living president without a library?" she asks her staff. Richard Splett correctly suggests the reason is probably because she only served for a year, but the ex-prez isn't having it. Convinced she's being disrespected because of her gender, Selina on Veep is a hypocritical self-proclaimed feminist — and her behavior proves that, sadly, women contribute to our patriarchal society.

Selina immediately asks everyone to get to work on the library and makes clear that she wants it to be at Yale, where she attended law school. She orders her staff to start lining up architects and immediately rejects Richard's suggestion to find a female architect because, "we're not redoing a kitchen here!" Her other suggestion is that the Kennedy Library be used as a reference point because he was a part-term president, too. Selina's mind works in strange ways. Yale is a hard pass (solid choice on their part), so Andrew suggests building the library at Smith, the all-women's college where Selina attended undergrad.

Women's college, woman president — it makes sense, as Andrew points out. For his part, Gary thinks the foliage in Massachusetts is positively to die for. Selina agrees, but mostly because she has nowhere else to take this library of hers.

Smith's president and faculty are initially thrilled at the opportunity. Regina, the college's president and Selina's old friend, says the Selina Meyer Library is perfect because it'll go hand in hand with Smith's School for Public Policy and Women's Studies. Selina is so not on board with that women's studies aspect. "It's a bit of a word salad. Maybe trim that last part about women?" she suggests. Selina's message is clear — she loves to remind anyone and everyone that she was the first woman president, and she won't miss an opportunity to slam the sexist media's role in her downfall. But she only appreciates or embraces feminism when it suits her.

Selina is completely uninterested in being associated with a program at her alma mater that would potentially pave the way for young women with political aspirations. But when several students join her meeting with the president, she instantly shifts into faux feminism mode and slams the male-dominated media for "this patriarchal phallus quo." Sure, the media has been unfair to her — but Selina doesn't care about fixing the sexism aspect for future generations. Unless she directly benefits from feminism, she has no interest in furthering women's rights.

As showrunner David Mandel recently told Vulture, "one of the fascinating things about Selina is how much she hates women... And yet she will use the woman thing when she needs to. She doesn’t enjoy doing it, but she does it when she has to." Mandel has also described Selina as “the most misogynistic character on television” and he's definitely onto something. In fact, Selina herself declared during a Season 3 abortion debate that she believes most women hate other women. That hardly seems accurate, but it's definitely the case for Selina.

It's comical to watch Selina flounder and ultimately lose her Smith College library opportunity thanks to Andrew's sex scandal — but the episode (and the series as a whole) makes an important point about what it means to be a feminist. For a full year, Selina was the most powerful person in the country — but being a powerful woman doesn't make someone a feminist unless she uses her platform and power to help other women.

For a real life example, we don't need to look any further than Ivanka Trump. She's a powerful, successful woman who brands herself as a feminist while working for her father, who is arguably the most misogynistic president in modern history. Of course, there are plenty of other examples — white women need to make their feminism intersectional, otherwise it's not feminism at all. Selina Meyer can't be bothered to recognize that feminism is never about just one person and what they can gain from the movement. Unfortunately, this fictional character has plenty of company in the real world.

More like this
The One Thing Ophelia Lovibond Would Hate To See In 'Minx' Season 2
By Gretchen Smail
Twitter Is Still Flying High After McFly’s Glastonbury Set
By Sophie McEvoy
Adele’s All-Female Lineup Includes Kacey Musgraves, Mahalia, & Self Esteem
By Shahed Ezaydi
What’s New On Netflix: 'Stranger Things' & 'Mean Girls'
By Arya Roshanian
Get Even More From Bustle — Sign Up For The Newsletter