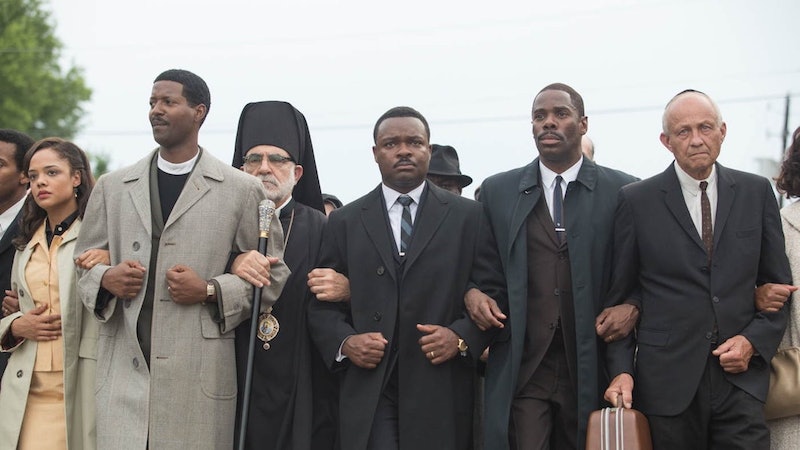 In the wake of nationwide protests surrounding the death of George Floyd, the Black man who died while pinned under a white police officer in Minneapolis, Paramount Pictures announced on June 5 that Selma will be available to rent for free on various streaming platforms. For the entire month of June, the 2014 biopic about Martin Luther King Jr.’s infamous 1965 march from Selma to Montgomery will be free to rent across U.S. digital platforms so viewers can “reflect on the ways that racial injustice has infected our society,” per Paramount’s statement on social media.

“We hope this small gesture will encourage people throughout the country to examine our nation’s history and reflect on the ways that racial injustice has infected our society,” the statement read. “The key message of Selma is the importance of equality, dignity and justice for all people. Clearly, that message is as vital today as it was in 1965.” On Twitter, Selma director Ava DuVernay similarly shared the news and wrote, “We’ve gotta understand where we’ve been to strategize where we’re going. History helps us create the blueprint. Onward.”

Paramount’s news follows in the footsteps of Warner Bros.' announcement on June 2 that Just Mercy, the 2019 legal drama film about civil rights attorney Bryan Stevenson, will also be free to rent all month following Floyd's death.

Selma follows David Oyelowo as Martin Luther King Jr. after the Civil Rights Act of 1964 legally desegregated the South. Despite this legislation, however, discrimination against African Americans remained rampant and made it difficult to register to vote. Circa 1965 Alabama, the civil rights activist soon organizes the infamous march from Selma to Montgomery that ultimately culminated in the Voting Rights Act of 1965, a landmark law that prohibited racial discrimination in voting. The film also stars Carmen Ejogo, Oprah Winfrey, and Common.

Paramount’s announcement also comes after the film re-entered the public discourse amid ongoing Black Lives Matter rallies. In an interview with ScreenDaily’s Screen Talks on June 4, Oyelowo accused Academy members of threatening to not vote for Selma after the cast wore “I Can’t Breathe” shirts to the film’s premiere to honor Eric Garner, the Black man killed by NYPD in 2014. “Members of the Academy called into the studio and our producers saying, ‘How dare they do that? Why are they stirring sh*t?" Oyelowo said. "And, 'we are not going to vote for that film because we do not think it is their place to be doing that.'"

He continued, “It’s part of why that film didn’t get everything that people think it should’ve got and it birthed #OscarsSoWhite. They used their privilege to deny a film on the basis of what they valued in the world.” Soon after, the Academy responded to the allegations and tweeted, “Ava & David, we hear you. Unacceptable. We’re committed to progress.”

More like this
Here’s Everything Coming To & Leaving Netflix In October
By Jake Viswanath
These 25 International Horror Movies On Netflix Prove Fear Is A Universal Language
By Bustle Editors
What’s New On Netflix: Ana De Armas’ 'Blonde' & A Nick Kroll Special
By Arya Roshanian
How To Stream 'The Woman King'
By Morgan Leigh Davies
Get Even More From Bustle — Sign Up For The Newsletter