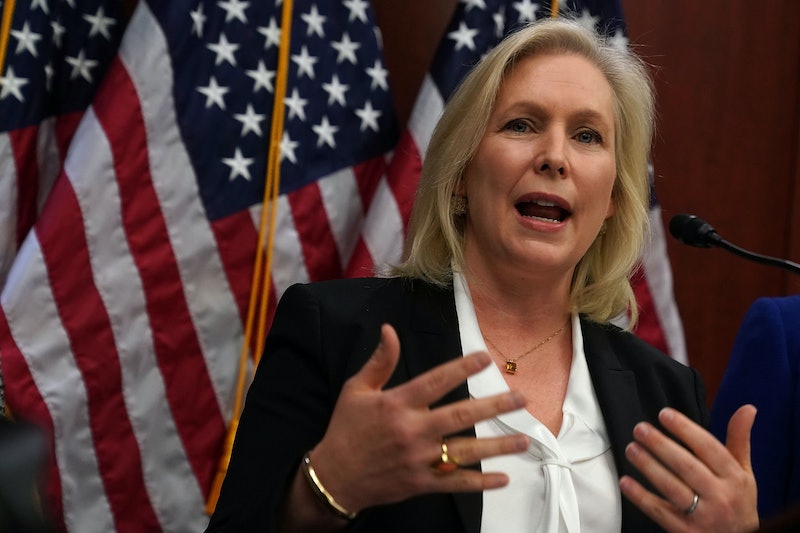 On Thursday, Senator Kirsten Gillibrand's, D-NY, sexual harassment bill returned to the spotlight when the Senator moved to force a vote to overhaul the way complaints are dealt with on Capitol Hill. It has been 100 days since the House of Representatives passed a similar bill unanimously, and Gillibrand told Bustle she's optimistic her legislation will see a vote in the coming days.

"It's so obvious," Gillibrand tells Bustle. "This should not be hard, treating the men and women we work with with respect and dignity. ... I don't know the holdup, but I do know that it's just because of a lack of political will."

Gillibrand invoked Rule 14, which allows a bill to go directly onto the Senate calendar without first being debated in committee. Gillibrand, who has emerged as a leader among lawmakers in their quest to combat harassment and discrimination in government, has blamed Senate Majority Leader Mitch McConnell in the past for refusing to bring it up for a vote. But in an interview Thursday, Gillibrand says she's "hopeful" that McConnell and Senate Minority Leader Chuck Schumer will come together "over the next several days" to put forward a bipartisan measure.

"This should not be hard, treating the men and women we work with with respect and dignity."

"Because I've been working on this for a while, I know that at least a third of this chamber already supports these measures," Gillibrand tells Bustle. "We just need a few more, hopefully a few more days of bipartisan efforts to bring folks together to support a bipartisan bill."

Gillibrand's bill is co-sponsored by 30 Senators, including co-sponsor Sen. Ted Cruz, R-TX, and Sen. John Cornyn, R-TX, who is a member of Senate leadership. She tells Bustle that if the Senate held an up or down vote on the bill today, it would pass "overwhelmingly, if not unanimously."

Senate Majority Leader Mitch McConnell is currently working with Senate Minority Leader Chuck Schumer on the legislation. The bill reworks the 23-year-old Congressional Accountability Act, which governs the way sexual harassment complaints are handled among people who work in Congress, including lawmakers and their staffs.

Late last year, Gillibrand took the lead in mobilizing members of her own party to oust Sen. Al Franken, D-Minn., from office after multiple women accused him of making unwanted sexual advances toward them. Franken denied "some" of the allegations. In the months since the #MeToo movement began, more than a handful of congresspeople have been accused of harassment. As the Senate neared the 100-day mark since the House passed its own legislation, Gillibrand expressed frustration that the issue had faded to the political back burner.

"Because I've been working on this for a while, I know that at least a third of this chamber already supports these measures."

All 22 women senators signed a letter in support of the legislation in March. It was referred to the Committee on Homeland Security and Governmental Affairs on Dec. 14, around two months before the House passed its own legislation unanimously.

Gillibrand gave credit to Sens. Amy Klobuchar, D-Minn., and Roy Blunt, R-Mo., for their work negotiating a compromise to the bill, which expedites the process by which a staffer can file a claim, and ends taxpayer-funded settlements for Members of Congress in sexual harassment and discrimination cases. These funds are currently paid out by the U.S. Treasury using federal dollars, which include U.S. citizens' taxes. The proposed change would require lawmakers to personally reimburse the Treasury for settlement payments if they're found responsible. It is one of the key points of the legislation that has been widely debated among lawmakers, advocates, and lawyers.

"I think we will have consensus on making sure that members of Congress who are found responsible for sexual harassment and other kinds of harassment will be held accountable and will be forced to pay any settlements," Gillibrand says.

The Senate Majority Leader determines whether a bill will be brought up for a floor vote, and McConnell is working with Minority Leader Schumer as part of a bipartisan working group tackling the issue. David Popp, a spokesperson for McConnell, tells Bustle the work is ongoing and he doesn't have anything to announce or readout regarding the bill's progress and whether it will come to a vote.