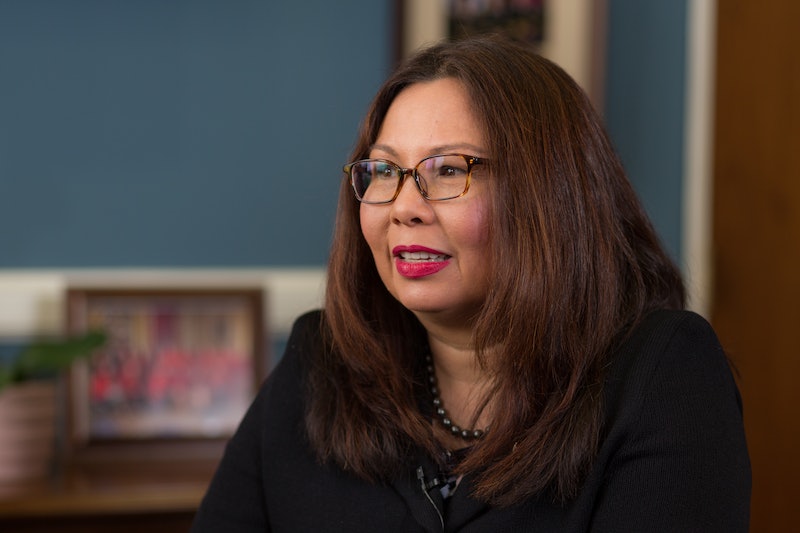 When President Trump reinstated the military's ban on transgender service members last week, several military leaders — and advocates across the spectrum of industries — condemned the President's decision. Now, Democratic Senator and Army veteran Tammy Duckworth says Trump's transgender ban weakens the military. When Duckworth spoke to Bustle this week, she echoed the concerns of many and offered her own firsthand perspective.

"If he wants a stronger military, he would allow anyone who is willing to serve and who's capable of doing the job to serve, " Duckworth tells Bustle in her Capitol Hill office. "In fact, what he's doing is weakening us." The Democratic Senator from Illinois served more than 20 years in the U.S. Army, reaching the rank of Lieutenant Colonel. In 2004, Duckworth, a Blackhawk helicopter pilot, lost both of her legs after her helicopter was attacked in Iraq.

As the Iraq war's first female double amputee and her unit's first female platoon leader, Duckworth knows what it's like to stand out in the Army. She was also the only Asian-American in her unit.

In a series of tweets sent out last week, the president reversed an Obama-era decision to allow transgender people to serve openly in the U.S. military. "Please be advised that the United States government will not accept or allow transgender individuals to serve in any capacity in the U.S. military," Trump tweeted. He cited "tremendous medical costs and disruption" as reasons for the ban.

When asked if a soldier's gender identity would have mattered to her when she was serving in the Army, she quickly says no. "What he's doing actually hurts our military," she says.

Ultimately, the transgender ban is just one of the issues that Duckworth has with Trump's leadership, particularly when it comes to the military. President Trump in April said that he gave the military "total authorization," implying that the ultimate decision-making power for military action was turned over to the military leaders in the Pentagon. Months later, Duckworth still isn't comfortable with that decision.

"If you're the Commander-in-Chief, you need to be the Commander-in-Chief, and the Pentagon needs to follow your orders," Duckworth says. "Yes, you take in advice and counsel from the Four Stars, but this is not a military junta. We are the greatest democracy in the face of the earth, and we need someone who can take that role and that leadership role, and we don't have that in this President."

For what it's worth, Duckworth isn't the only lawmaker to question the President's approach to running the military. After Trump's transgender ban was announced, Republican Sen. John McCain, also a military veteran, called the move "a mistake." Like McCain on the opposite side of the aisle, Duckworth's perspective comes with a fair share of weight behind it, given her time in service to the country.