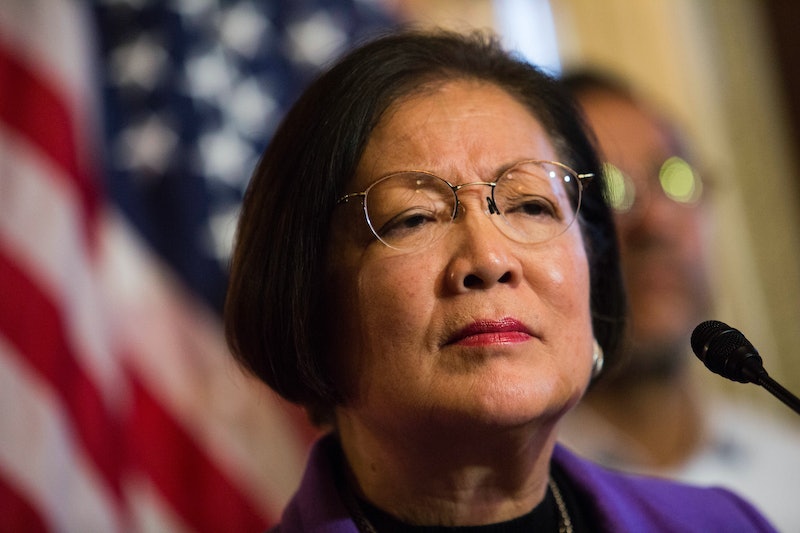 Brett Kavanaugh's confirmation could lead the Supreme Court to nullify Roe v. Wade, Sen. Mazie Hirono said Sunday. Speaking with ABC News' Jonathan Karl on This Week, she said that even though the justices would not likely vote to overturn the ruling, they would allow states to start passing regulations that chip away at access to abortion. "Even if they don't [overturn Roe], they will nullify it, pretty much," Hirono said.

"I actually studied his cases, and I read his, particularly his dissents, which are very telling, very much against reproductive choice," Hirono told Karl. "Yes, it actually matters if they go over there and overturn Roe v. Wade, which I really doubt they're going to do, but the states are very busy passing all kinds of laws that limit a woman's right to choose. It's those things that will go before a Justice Kavanaugh."

The comment was part of a longer interview about the Supreme Court confirmation process. Hirono opposed Brett Kavanaugh's confirmation even before the allegations of sexual assault and misconduct (which he has denied) arose. She told Karl that one of the reasons for this was particularly his views on abortion that she says she read in his past cases.

When she announced that she wouldn't vote to confirm him, Hirono also mentioned abortion rights in her statement. "He is primed to overturn or narrow Roe v. Wade," Hirono wrote in August. She said that reading his opinions, dissents, law review articles, and speeches — plus some content from his federal service under President George W. Bush — made up her mind. "It is clear to me that he is not a fair-minded judge and would not be a fair-minded justice."

Hirono also acknowledged the frustration that many protesters have been sharing in response to Sen. Marco Rubio's tweet saying that if roles were reversed, Dems would call the protesters a mob. "The anger is real. There are a lot of people who feel very, very strongly," Hirono responded.

She added, "People are making their own decisions, because as you know in our country, civil disobedience is very much a part of our country. And of course, if you go over a line, then you have to be held accountable," Hirono continued.

Karl also pressed Hirono several times on whether she thought it was wise that Democrats talk about impeaching the justice. Hirono didn't weigh in one way or the other, but she did make clear that the confirmation process has made its mark. "He's going to be on the Supreme Court with a huge taint and a big asterisk after his name," she said.

In a separate appearance Sunday morning on CNN's State of the Union, Hirono once again said she believed Dr. Christine Blasey Ford. "I certainly believe Dr. Ford. Anybody watching her testimony would know, I would say, would conclude that she was being very truthful," Hirono told Dana Bash. "The one thing that she recollects with 100 percent accuracy is that Brett Kavanaugh assaulted her."

Kavanaugh, who maintains he did not assault anyone, was confirmed on Saturday and sworn in. He is set to start on Tuesday.