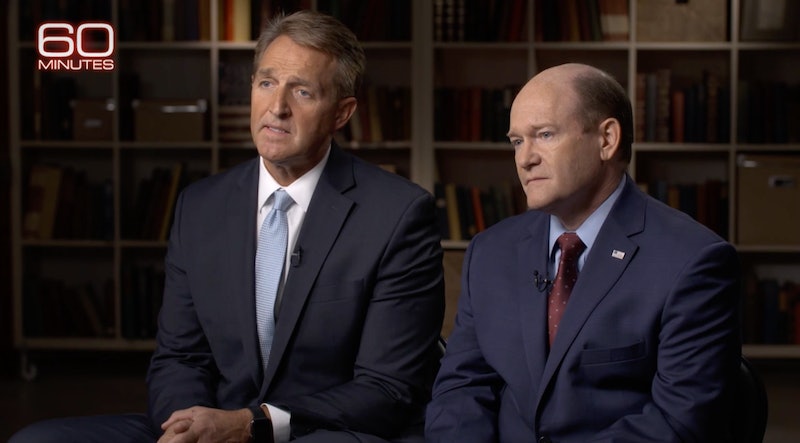 One of the most dramatic moments of the Kavanaugh confirmation process last week was when Sen. Jeff Flake stood up and went to confer with his Democratic colleagues about advancing the nomination with a compromise. On 60 Minutes Sunday, Sens. Chris Coons and Jeff Flake spoke of how they worked together to negotiate a one-week FBI investigation into the allegations against Judge Brett Kavanaugh (all of which he denies). And, yes, final negotiations took place in a phone booth.

On Friday, Flake announced that he would vote to advance Kavanaugh's nomination to the floor of the Senate. Shortly thereafter, he was met by two activists, Ana Maria Archila and Maria Gallagher, in a Capitol Hill elevator. They told him of their own sexual assaults.

"You're telling all women that they don't matter, that they should just stay quiet because if they tell you what happened to them you are going to ignore them," Gallagher told Flake.

Coons told 60 Minutes' Scott Pelley about what happened next. "I was outside the hearing room, probably, about the same time he was having that conversation in the elevator," Coons said. "And a reporter showed me that Jeff had announced he was gonna vote for Kavanaugh. And I was very upset, I mean, hugely distraught by that, because I was still hoping there might be some moment here."

Coons announced to the whole committee that he was hoping to find a compromise of a one-week FBI investigation. And while he announced it publicly to all his colleagues, he told Pelley that he was mostly talking to Flake. "I was, principally, concerned about helping my friend listen to his doubts and his conscience," Coons said.

Flake listened to the plea and went over to talk to Coons. "I cannot tell you how grateful I am. Jeff's the hero here," Coons told Pelley. The two walked out into the hallway, and the whole committee followed.

"My recollection was Jeff, at one point says, 'OK I want to talk to Chris.' And we went into, literally a phone booth that we can barely fit in talking to another senator and there's this whole committee right outside." That's where they worked out the details.

Flake told Pelley that he could not have done this if he were up for reelection. "There's no value to reaching across the aisle. There's no currency for that anymore. There's no incentive," Flake said.

As for the investigation — which has been criticized by some for being to limited in scope — Flake thinks it could prove helpful. "The FBI during their investigation will ask questions that maybe will prompt things or there's I think Dr. Ford said there was somebody she couldn't remember the name of," Flake told Pelley. "It's possible that one of the others they interview say, 'Well no, this was the name.' And it will lead to additional interviews that can take place as well," Flake said.

Coons also said that in a week, the situation will be better. "I think we will be in a different place," Coons told Pelley. "Because lots of survivors around the country will feel that Dr. Ford's story was heard and respected and further investigated. We may well be in a different place a week from now because Judge Kavanaugh and his family may well have had exculpatory evidence brought forward."

Whatever comes from the investigation, it would not have been possible without these two working together.