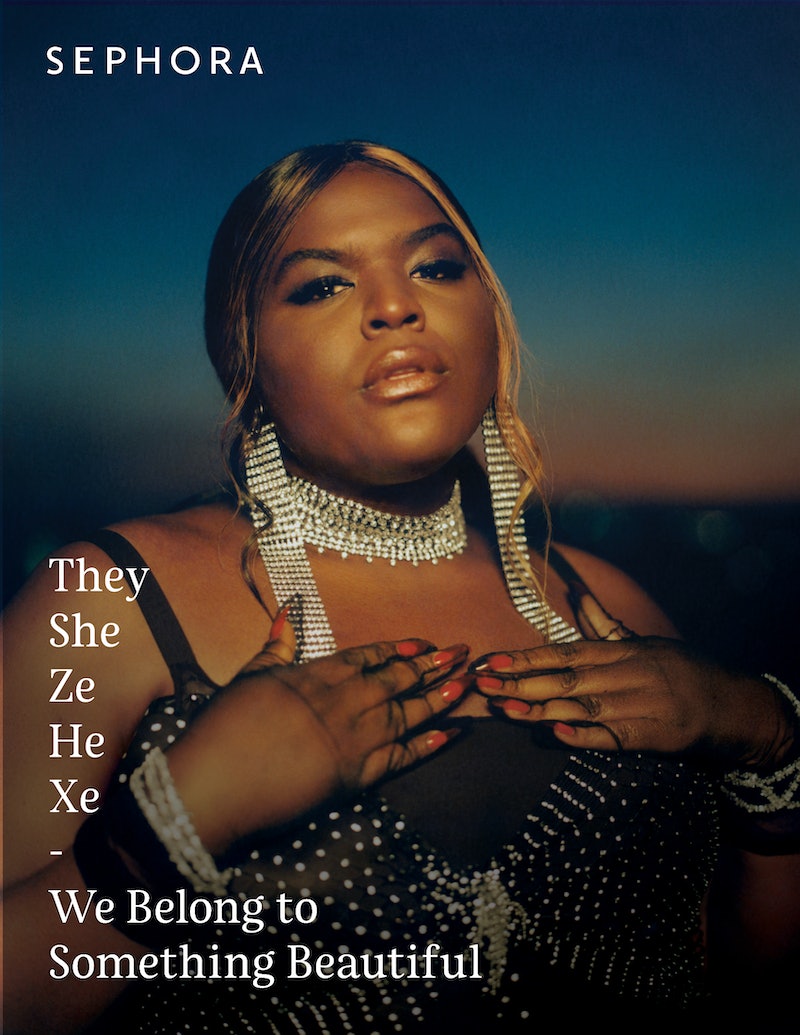 Fatima Jamal is trans, fat, femme, and Black. She's also an interdisciplinary artist whose work centers her own body in opposition to cis, white, and straight size ideas of beauty and desirability. Through her work, Jamal disrupts. And now, Jamal is disrupting your regular beauty programming in Sephora's Identify As We campaign — and taking the art she's been creating and combining it with the retailer's new, inclusive mission.

The Identify As We campaign is a continuation of Sephora's newly launched We Belong To Something Beautiful company platform. The company's new, inclusive vision brought with it a new manifesto for the major retailer and a commitment to making all people feel welcome shopping its stores.

The platform announcement and campaign comes a few weeks after singer SZA appeared to accuse one Sephora employee of racial profiling, tweeting that the employee at a Calabasas location called security to make sure she wasn't stealing. A Sephora rep tells Bustle, "While it is true that SZA's experience occurred prior to the launch of the 'We Belong to Something Beautiful' Campaign, the campaign was not the result of this tweet. However, it does reinforce why belonging is now more important than ever. Our entire organization is exited to set aside this time to re-commit to building an environment of inclusion."

Along with improving company culture, the Identify As We campaign centers on showcasing LGBTQ, non-binary and genderfluid individuals in Sephora ads to further the retailers inclusive efforts. And Fatima Jamal is one of those features.

While Jamal is a perfect fit for Sephora's We Belong To Something Beautiful campaign, she almost didn't partner with the retailer for the spot. In an interview with Bustle, the Jamal explains that she was at a friend's party when she got an email regarding an "exciting opportunity." The opportunity, however, required a non-disclosure agreement before Jamal could even be told what it was. She placed her phone down and went back to party.

Clearly, Jamal ended up responding to that email from Sephora. She tells Bustle that she has shopped at the beauty retailer for years, and she always wanted to be in a beauty campaign.

"To see myself actualized as a model or a subject of beauty — and also to be someone who has been working and writing around beauty for a — it was nice to be able to see it actualized in that way," she says of the campaign.

Jamal's work on the campaign, however, is far from her first time highlighting trans womanhood, fatness, and black communities. But she says Sephora's platform builds on and echoes her work — and brings it to a larger audience.

"I dream for people like me to be able to realize their beauty on their own," she says. "[Their beauty] being affirmed by a national retailer is a plus. But the fact I felt comfortable enough to be myself to say 'yes' to [the opportunity] ... is part of the mirror work that I’ve been undergoing for years, learning to see myself and value what I see."

For a portion of the campaign, Jamal worked alongside gender nonconforming model Aaron Philips. The pair filmed a night club scene together, partying and dancing freely in front of the camera. For Jamal, entering a space where no one was judging Philips, who uses a wheelchair, or her for simply existing was particularly powerful.

"Aaron was just blessing me with so many affirmations, and a weight of emotions just went through my body," she says. Here we are, in this imagined space, dancing together on the dance floor. I’ve never, ever in my life seen what was witnessed there. For a disabled person to enjoy themself in a club? And people are, of course, dancing around us, but nobody is dancing over Aaron? That for me was a particularly powerful moment"

Jamal is just one of 10 members of the LGBTQ community to be featured in Sephora's "Belong To We" campaign. Through the campaign imagery and video, the retailer is centering marginalized identities that are often outside of socially constructed beauty standards — and disrupting beauty standards at the same time.