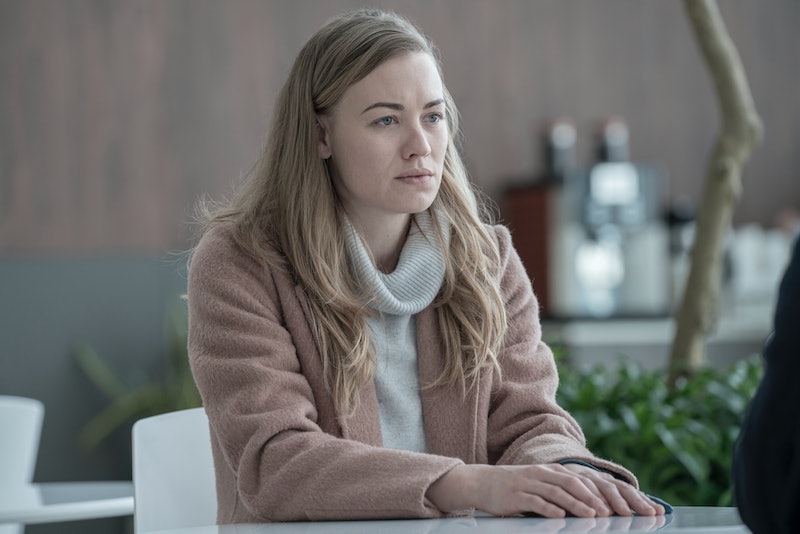 Spoilers for The Handmaid's Tale ahead. The world of The Handmaid's Tale got very small, very fast. A lot of details came to light in Wednesday's episode and two characters had an unexpected heart to heart that wasn't exactly heartfelt. Serena and Luke met on The Handmaid's Tale, and Mrs. Waterford's attempt to say goodbye to baby Nicole immediately turned into a threat.

Serena convinced June to call Luke and arrange for a meeting between her and the baby at the Toronto airport. It's interesting that Serena asked for this from June as if it were a favor, when she herself has used June's daughter Hannah as a way to exert her own power. She knows it's not a favor. Visiting with Hannah has only furthered June's desire to cripple Gilead from within, so when June agrees to this, it's a little bit of a way to make amends with Serena and also a way to get revenge.

Thankfully, Luke and the baby were protected by Canadian law and not in danger of being arrested or taken back to Gilead. The scene between him and Serena was actually more cathartic for him, and the audience. Luke doesn't hold back when it comes to confronting people from Gilead, which is jarring after seeing these characters in their overly proper, draconian society. Serena has been more than complicit in the serial rape of June and hundreds of other women, after all, and he immediately swears at her. "Your wife is perfectly safe," she says. "That's a lie," he says. The world of The Handmaid's Tale is so horrible that just hearing Luke call bullsh*t to Serena's face is oddly refreshing.

"I don't know what you tell yourself so you can sleep at night," Luke says. "But Nicole is going to know exactly where she came from and how brave her mother was for getting her here. That's her story."

What Luke doesn't know, at least not in that moment, is that Serena was crucial to getting Nicole out of Gilead too. "She was my miracle," she says, "and I let her go because I wanted a better life for her, and so did your wife. OK? So if you can't honor my wishes, honor hers."

Then she threatens June in front of Luke. Classic Serena — always falling back on intimidation tactics. Did Luke provoke that response? It seems like Serena was prepared for Luke to lash out at her in some way. What happens next is probably not Luke's fault. She's not completely ignorant of his situation or feelings. However, when Serena returns home, Fred easily changes her mind about letting Nicole go, and they make a formal plea to Canada to hand over their "kidnapped" child.

Honestly, what's going on with Serena this season? She doesn't seem able to commit to any kind of path, whether it's standing by Gilead and her husband or burning it down (literally) from within.

When Mark Tuello — who is still hot and still offering her asylum in Hawaii — tells her that he used to live in Atlanta and Serena says she hopes he makes it back there one day... what does that mean? What exactly does she want? Why can't she just run away? She should literally let her hair down, take off with Mark, and make bank off of a tell-all book.

It's frustrating, but realistic in its own way. People are complicated, and change rarely takes a linear path. The only concrete thing that Serena wants is a baby, and all the tyranny in the world doesn't seem to be able to give her one. Maybe she's playing a long game on The Handmaid's Tale, or maybe she's relapsing once again in pursuit of that one goal. It's tragic for her, but compelling none the less.