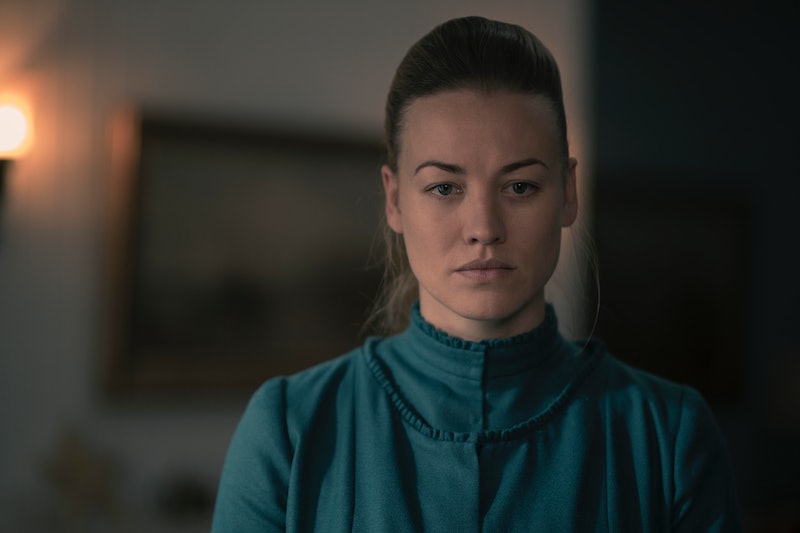 Spoilers for The Handmaid's Tale Season 3 ahead. Serena Joy has always been a complicated character: impossible to like, but almost as hard to write off entirely. While Season 2 saw her dabbling in small rebellions, it wasn't until Nicole was born that Serena was able to see Gilead for what it really was. Serena enters Season 3 of The Handmaid's Tale knowing she's helped build a society she no longer recognizes, and one in which she could never raise a daughter. Since we've known her, Serena has hovered near her breaking point. In Season 3, she finally hits it: burning down the house and everything inside it.

Serena's act of arson is as symbolic as it is shocking, signifying Serena's deep grief and rage over what this home has failed to provide her. She starts with the master bed, where the Ceremony takes place, and where Nicole was (in theory) conceived. The agony of being separated from Nicole is still fresh: it plays out in an earlier scene, when Serena lunges at June, demanding to know where she is now. The bed is a reminder of the horrific paradox of Serena's existence— without the Ceremony, Nicole would never have been born, but rituals like the Ceremony are exactly why Nicole could not safely stay.

But Serena's rage when faced with her marital bed goes deeper than grieving Nicole. For years, she and Commander Waterford tried and failed to conceive, setting the stage for Serena's bitterness and hostility toward June from their first meeting. Her struggles with infertility — and deep desire for a child — also informed her support for Gilead's vision, in which procreation supplants all other values.

As viewers, seeing the Waterford bed burn is satisfying because we know it as the site of June being repeatedly raped. For Serena, the bed represents where all her troubles began: in burning it, she signifies her unwillingness to return to the status quo.

Serena Joy was always going to have a breakdown in Season 3 because the Season 2 finale saw her realize she would never have a child. It had been her greatest hope for so long: but in giving up Nicole, she was forced to accept that being a mother might not happen for her in this lifetime. Anyone who knows Serena could have realized a breakdown was coming, and Commander Waterford was a fool to leave her alone in the house. What we don't know is what this means for Serena now.

Waterford has punished Serena before: after she takes over some of his work, he beats her with his belt; and in the Season 2 finale, she has her finger cut off for suggesting women should be allowed to read. It's unclear who knows that Serena was the one to set fire to the house — it's not impossible that June could be blamed for it, and no one except June actually saw Serena in the room where it started. At the end of Episode 1, Serena is taken away in a car, but we don't know with whom or where it's going.

Waterford and Serena have already been fighting, and it's unlikely he'll be forgiving if he finds out what she's done. Even if he doesn't, she's unlikely to want to try for another child, which could cause further friction between them. Finally, now that June's been transferred to another posting, she might never speak to Serena again: but given that she was the only one who could ever bring out Serena's human side, perhaps Serena will seek her out. Serena may be long past the point of redemption on Handmaid's Tale, but her rampage is just getting started. Hopefully, this time she'll focus her villainy on those who deserve it.