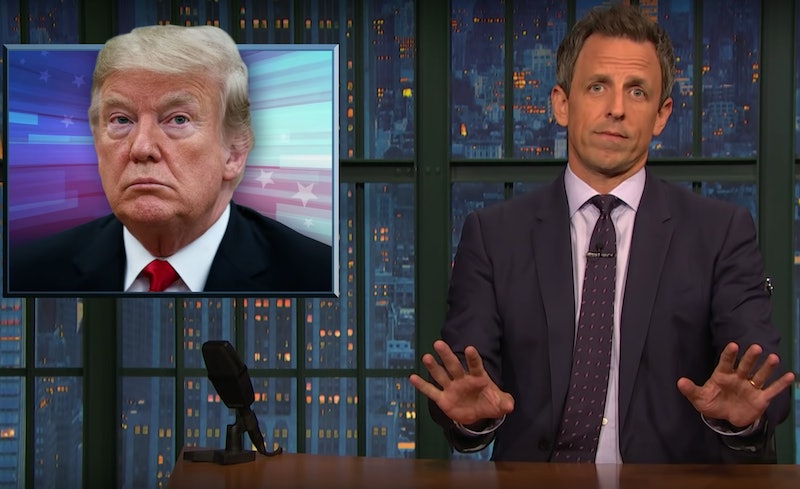 After President Donald Trump co-opted a tweet from his VP following a domestic terrorism threat, Seth Meyers mocked Trump's response to the suspicious packages sent to Democrats and a news outlet on Wednesday. Meyers not only called out the president for lazily using someone else's comments about the attempted attacks on multiple high-profile politicians, but also asserted that Trump's rhetoric around violence and the media can lead to dangerous situations like the one that unfolded this week.

“In a scary moment like this you might expect the president to call for calm — to tone down his own rhetoric and direct his supporters to do the same. Instead, President Trump initially outsourced that job to Vice President Mike Pence,” Meyers said on Wednesday’s episode of Late Night.

POTUS simply retweeted Pence's statement Wednesday morning that condemned the attempted attacks as "cowardly actions" that "have no place in this Country," adding only, "I agree wholeheartedly!" Though Trump later commented on the situation further, it didn't go unnoticed that he didn't take the time to write his own tweet that morning.

“Hey, man, you’re the president!” Meyers said. “You’re supposed to say something to calm people down. You can’t just add your name to someone else’s statement like you’re signing a get-well-soon card for a co-worker.”

“In these times we have to unify,” Trump said at the White House later on Wednesday, per The New York Times. “We have to come together and send one very clear, strong, unmistakable message that acts or threats of political violence of any kind have no place in the United States of America.”

He later added at a rally in Wisconsin on Wednesday night, however, that "the media also has a responsibility to set a civil tone and stop the endless hostility and constant negative and oftentimes false attacks."

Meyers pointed out that just last week Trump reenacted a reporter being body slammed by Rep. Greg Gianforte (R-Mont.). POTUS has also called the press "the enemy of the people" and frequently claimed that the mainstream media is making up "fake news" while he himself continuously lies about immigration. Trump has told an average of eight false or misleading claims every day since he took office in 2017, according to The Washington Post.

"The president’s words matter," Meyers said, "whether it’s his lies about the media or his attacks on immigration."

Or, his slow response to attempted attacks on top Democratic politicians and the media this week. Calls for civility sound awfully hollow when they're immediately followed by verbal attacks.