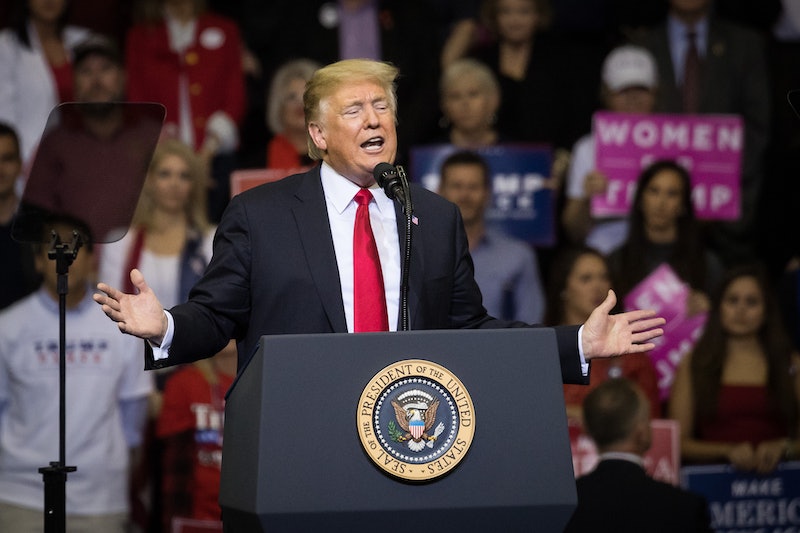 The president's rallies are generally not a place for scripted statements. So, after he called for unity Wednesday morning following the discovery of pipe bombs CNN's mailroom, it came as little surprise when he changed course. Still, the video of Trump accusing the media of "endless hostility" at a rally in Wisconsin Wednesday night might take you aback.

"The media also has a responsibility to set a civil tone and to stop the endless hostility and constant negative and oftentimes false attacks and stories," he said, as rally attendees cheered. Notably, he went on to accuse the Democratic Party of "openly encouraging caravan after caravan of illegal aliens to violate our laws and to break into our country," a message that has been largely debunked as Republican scaremongering ahead of the midterm elections.

This shift in Trump's message comes less than a day after pipe bombs were sent to prominent Democratic leaders, including Barack Obama, Hillary Clinton, and liberal billionaire philanthropist George Soros. In his initial statement, Trump emphasized protecting the safety of American citizens and bringing the perpetrators to justice.

"We have to come together and send one very clear, strong, unmistakable message," he added, "that acts or threats of political violence of any kind have no place in the United States of America."

The debate over civility in politics has popped up frequently over the last few months, as politicians have been denied service and protested at restaurants. Trump, who frequently rails against the emphasis on political correctness in the media, also invoked the civility argument at Wednesday's rally, applauding himself for how well-behaved he was being. "Have you ever seen this?" he asked. "We’re all behaving very well."

"Those engaged in the political arena must stop treating political opponents as being morally defective," Trump continued. "No one should carelessly compare political opponents to historical villains, which is done often. It’s done all the time. It’s got to stop. We should not mob people in public spaces or destroy public property."

"Mob" is in fact a term Trump has often used to describe Democrats, including in reference to the protesters present at Brett Kavanaugh's Supreme Court confirmation hearings. And while he advocated against name-calling at Wednesday's rally, the president is himself well-known for his disparaging nicknames for opponent politicians and adversarial women. It's also worth noting that despite his direction to the crowd to peacefully settle their political differences at the ballot box, Trump has repeatedly failed to condemn violence against members of the media, and has even gone so far as to encourage it.

CNN has long been a primary subject of Trump's media animosity (remember the wrestling video tweet?), but Wednesday night he seemed to take it a step further. Following the rally, White House Press Secretary Sarah Huckabee Sanders responded to CNN criticism that the White House wasn't taking its role in the attack seriously by echoing the president's sentiment. Trump "asked Americans 'to come together and send one very clear, strong, unmistakable message that acts or threats of political violence of any kind have no place in the USA'," she wrote. "Yet you chose to attack and divide. America should unite against all political violence."