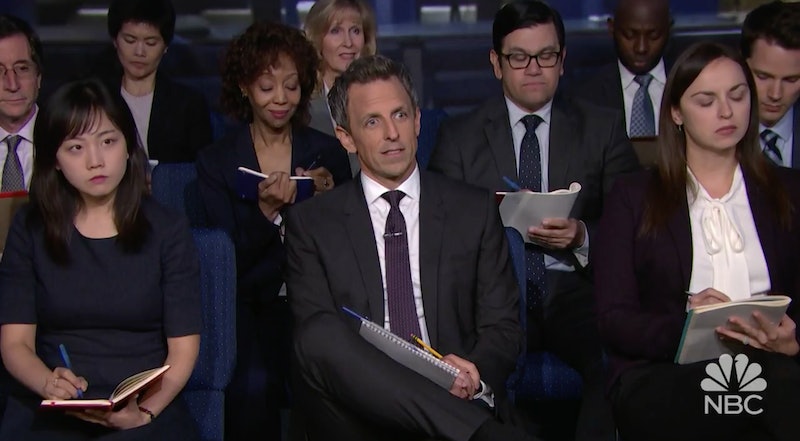 One late night host has gotten the president to open up — at least in the latest version of this recurring spoof. Seth Meyers' fake White House Press Conference skit with President Donald Trump had the president answer a number of embarrassing questions — all by using past footage of the president with the press and pairing it with new, funnier questions.

There's a whole slew of reporters on screen with Meyers in the middle. And he's the only one asking questions. "Mr. President, if I had a $100 bucks for every time you lied, what would happen?" Meyers asks.

"This whole room would be filled with $100 bills." Trump responds in footage taken out of context.

"What does it say on your business card?" Meyers follows up.

"A horrible precedent," the edited Trump responds, the pun purely thanks to the Late Night writers and editors.

"How are your kids doing?" Meyers continues.

"They're very good people. I know many of them," edited Trump shoots back.

Among the other topics that the heavily edited president addressed, were what he whispers to Stormy Daniels, what nickname Vladimir Putin has given him, and when he's declared bankruptcy.

"What do you say to yourself in the mirror everynight before bed?" Meyers asks at one point.

"They weren't laughing at me, they were laughing with me," edited Trump responds.

That quote comes from a response to reporters about the first minutes of his UN General Assembly speech when Trump talked about the "booming" economy and how he'd accomplished more than his predecessors. The audience could be heard laughing. "We had fun. That was not laughing at me," Trump continued in the real press conference. "We had a good time. They respect what I’ve done."

"That's a nice affirmation," Meyers says, moving on to his next question. "What will it say on your tombstone?"

Trumps associates are teased too. "Why didn't Betsy DeVos and her advisers show up at your last meeting with the Department of Education?" Meyers asks.

That last quote's original context is far more serious. It comes from Trump's press conference on Sep. 26 in the midst of the Brett Kavanaugh hearings. A reporter asked Trump if a chance was missed by not having the FBI investigate the allegations of sexual assault against the then nominee for the Supreme Court (which he denies). Trump responded with this.

The answers he gave in their real context weren't so funny — you'll have to thank Late Night and Meyers for the entertaining spin. NBC at least is part of the alphabet that the spliced Trump knows. Meyers asks in the skit if he can recite the entire alphabet.

"ABC, CBS, NBC," edited Trump responds, to many laughs in the studio audience — and likely at home, too.