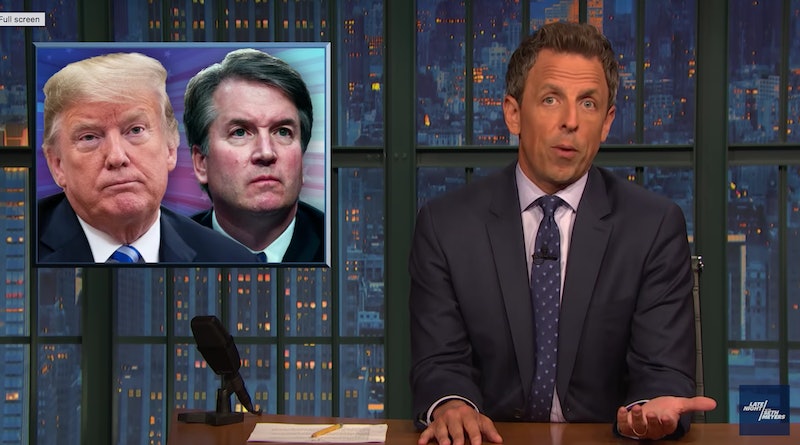 Lots of political news broke over the weekend, giving late night hosts plenty of material on Monday night. But some of the jokes addressed the serious allegations about Brett Kavanaugh, Trump's Supreme Court nominee. In particular, Late Night's Seth Meyers critized Kavanaugh's defense strategy when it came to addressing allegations against him.

Meyers noted that until recently the confirmation seemed an "ace in the whole" — despite the Mueller investigation and other difficulties the administration has faced like the anonymous New York Times op-ed. But then Christine Ford, a California professor, accused Kavanaugh of attacking and attempting to sexually assault her while both were in high school. Kavanaugh "categorically and unequivocally" denied the allegations. "I did not do this back in high school or at any time," the nominee said in a statement on Friday.

After reports of the allegations came out late last week, Senate Judiciary Committee Chair Sen. Chuck Grassley (R-Iowa) released a letter in support of Kavanaugh signed by 65 women who knew Kavanaugh in high school. Meyers took his time to address this prepared letter.

“You know what’s a little incriminating? If you get accused of sexual assault and you just happen to have on hand a list of other women you didn’t sexually assault,” Meyers said. “If the cops come to your house and say they want to ask you about a murder and you come to the door with a list of people you didn’t murder, you’ll still be a suspect in that murder.”

Meyers also said Kavanaugh's nomination would be a win for the president because, he argued, the judge's views on executive power "could not be friendlier to Trump." For instance, he played a clip of Kavanaugh at his confirmation hearings answering a question about the president's ability to influence in federal investigations. "I need to stay not just away from the line but three zip codes away from the line of current events," Kavanaugh responded.

"Hey, you don't get to stay three zip codes away from Donald Trump," Meyers joked. "Some of us are three entire states away and we can still hear him screaming over the sound of a jet engine. Also, nothing says you're not from New York like saying that three zip codes away is a large distance. In New York, three zip codes is like two Starbucks away."

Meyers then played CNN tape of a reporter following Sen. Susan Collins (R-Maine) through the D.C. airport asking her about whether she believed Ford and whether the vote would be delayed. Collins didn't stop to answer but tried to power walk herself away from the reporter. "If that were New York, she would have walked through three f*cking zip codes," Meyers joked.

The allegations and letter of defense that Meyers mentioned are not the end of the story. Ford may testify in front of the Senate Judiciary Committee on Monday, although she reportedly has not confirmed her attendance. The chair Sen. Grassley scheduled the Monday hearing before speaking with Ford or her lawyer, though. Ultimately, the committee has delayed its vote on advancing the nominee from Thursday this week until sometime next. Kavanaugh will also likely testify again, and if he does, he might want to consider Meyers' criticism.

More like this
25 Things I've Reduced My Life To, In Addition To WFH In My PJs
By Ginny Hogan
7 Things We Learned From Rebekah Vardy's First Post-WAGatha Christie Interview
By Sam Ramsden
What We Know About Where Caroline Watt Is Now
By Catharina Cheung
Naomi Osaka & Emma Raducanu’s Experiences Have Inspired A New Amazon Show
By El Hunt
Get Even More From Bustle — Sign Up For The Newsletter