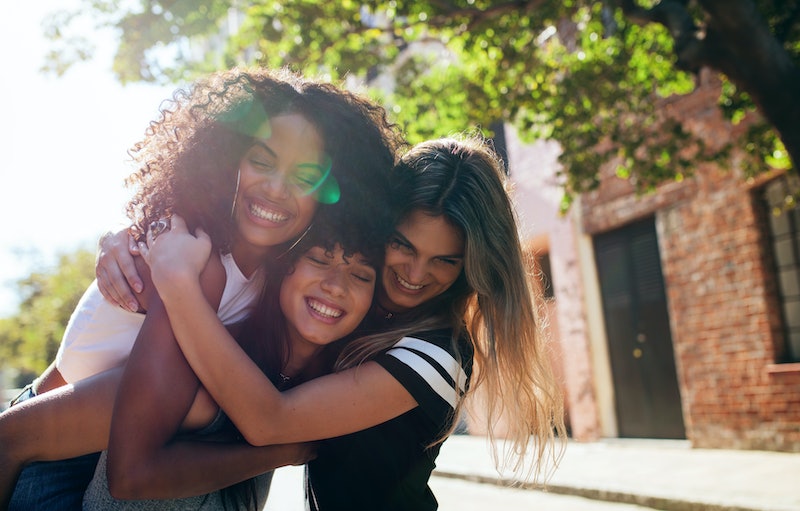 A great evening out with friends. That amazing vacation you wish you could take again. Having a truly delish meal at a restaurant you’ve never tried before. Those feelings of happiness sometimes seem so fleeting that it's no wonder that people are constantly trying to figure out how to be happier. But now, researchers have figured out a pretty simple way to do just that. According to researchers from the University of Minnesota and Texas A&M University, whose findings will be published in the October issue of the Journal of Consumer Psychology, the way people frame their goals for their life experiences might actually affect how much longer they feel happy about those experiences.

According to the researchers, past studies have shown that people need to set specific, realistic goals to feel happy. Think the “SMART goals” that most workplaces use, defined as specific, measurable, achievable, "results-focused, and time-bound," according to MIT. The researchers say these goals might be effective for the workplace or for setting exercise goals, but when it comes to overall happiness, their findings show that setting much broader, non-specific goals actually make a person happier. In other words, when it comes to making those feeling of happiness last longer, setting general goals is the way to go.

"If people watch a movie with a specific goal like feeling excitement, then they may be less likely to remember the funny or meaningful elements of the movie," Rohini Ahluwalia, a professor of marketing at the University of Minnesota and author of the study said in a news release. "We predicted that people with general goals would engage a broader range of emotions and experience more happiness over time."

The researchers found that, although each group had the same level of happiness at the time of purchase, the group with the general goal reported more happiness as more time passed. "Our findings suggest that people can change the amount of happiness they get out of an experience," Ahluwalia said in a news release. "A general happiness goal can leave a longer-lasting positive emotional imprint."

This study feels in line much of the research on mindfulness, which began as a religious practice in the East, but surged in popularity as a relaxation technique in the U.S. in the 1970s, according to The Harvard Gazette. However, says the Harvard Gazette, whether practiced religiously, spiritually, or simply for relaxation, various mindfulness practices, such as yoga, meditation, and breathing exercises, have shown to have a positive impact on symptoms of depression. According to Psychology Today, a major — but perhaps lesser known — component of mindfulness is letting go of one’s expectations and accepting situations for what there are. Setting broader, rather than specific, happiness goals for certain situations is a different way to do mindfulness work.

The researchers say more studies are needed to further confirm their findings, but early results show that making small changes in the way you think about your experiences can help you feel happier in your day-to-day life. Letting go of specific expectations and setting broader goals for your experiences might be the key to longer-lasting happiness.