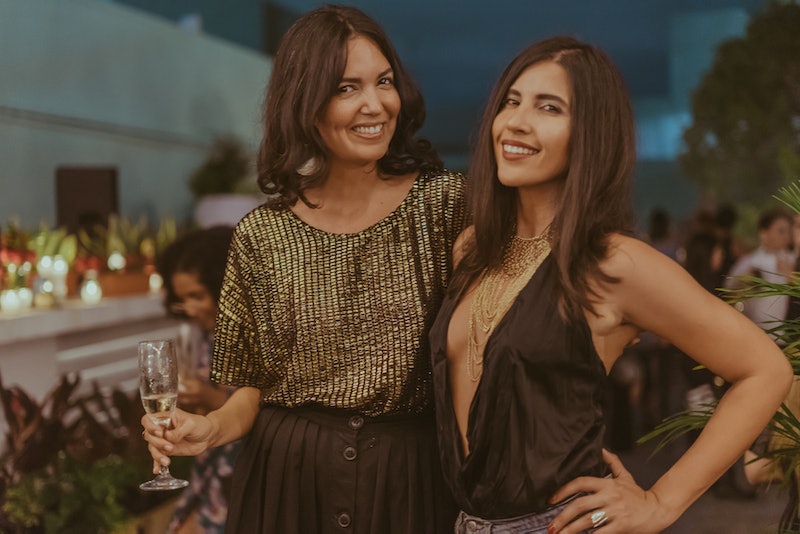 During a Sunday brunch of strawberry mimosas and sunny-side-up eggs, a group of girlfriends and couples packed an eclectic, warmly lit restaurant, picking grapes and orange slices off a woman and man’s naked bodies in a Nyotaimori-style fruit and sushi buffet, and later devoured a sugary dessert from each other’s hands. This isn’t a scene in an episode of Sex and the City. It’s one of several events Papaya Tropical, a community working to destigmatize female sexuality in Puerto Rico, organizes throughout the island to spark open and honest conversations about sex and relationships for women.

The group formed in 2014, after founder and CEO Vanessa Vila discovered that most women she knew were entering their 20s and 30s with little to no information on how their bodies worked and what non-toxic partnerships looked like. Through an online publication, where she and a team of sex experts and everyday Puerto Rican women write personal essays and facts-based articles, Papaya Tropical began addressing these issues, educating readers on the female reproductive anatomy, self-pleasure, queerness, and sexual health, as well as self-worth, intimate partner violence, and coercion through friendly and accessible dialogue. As their audience grew to more than 20,000 users, ranging from curious teens to 50-year-old moms, the group brought their digital conversations to the real world, creating space through brunches and panels for women to finally feel like they can liberate themselves on an island where female sexuality is still widely censured.

“Sexuality is a taboo here, so if we talk about it, it has to be clinical or, in my case, where my family was very religious and conservative, it had to deal exclusively with love, marriage and to have children, not about pleasure. There wasn’t information on how to know your own body, on what to expect from a relationship, on what’s important to a healthy relationship, so that you’re not driven by what you see on the TV, which is completely wrong,” Vila tells Bustle at El Mercado Libre, a feminist café and boutique in San Juan, Puerto Rico. “All that information we receive and how we are raised is distorted, and so, I was like, there’s a need to talk about this, but to talk about it approachable, like a friend you can confide in.”

Not unlike many Latin American countries, Puerto Rico’s local government is heavily influenced by religion, particularly around women’s issues such as reproductive rights — though Gov. Ricardo Rosselló did oppose a bill proposing to limit abortion access in May 2018 — and gender violence. In 2018, 41 women were killed in Puerto Rico, and at least 24 of them were allegedly killed by former or current intimate partners. In response to this crisis, Colectiva Feminista en Construcción, an intersectional feminist group on the island, has initiated an anti-violence against women movement. On Nov. 23, 2018, the collective held a march and sit-in at la Fortaleza, the governor's mansion, demanding Gov. Rosselló sign an executive order declaring a state of emergency in relation to gender-based violence. After three days, officers, clashing with the women, aggressively ended the action. After a request for the Governor to meet with the collective from famed island musicians Residente and Bad Bunny, Roselló sat with the women of the group on Jan. 14 to discuss potential solutions to the problem, though no executive order or bill has been announced.

With the absence of legislation failing women, islanders, like Vila, have focused on changing culture through education. Currently, Puerto Rico’s public schools teach sex ed through health classes, but as the fiscal control board, a controversial unelected oversight organization established by Congress to manage the territory's finances, closes hundreds of schools and slashes resources, health educators are often the first to be dismissed.

In those institutions where the program remains active, instruction on sexual health and relationships are often incomplete or, worse, inaccurate. Yvette* , a health teacher at a public school in a rural municipality on the western coast of the island, tells Bustle she spends about one to two months of her semester lecturing on sexuality. Teaching a predominately abstinence-based education from textbooks she says are outdated and broken, Yvette, instructs students on human development, relationships, and sexual health, discussing topics from sexually transmitted infections (STIs) to teen pregnancy and contraception. She says that she has been asked to limit lessons on the latter because “that’s like us approving [the students] going out and having sex.”

"It’s hard for them to see sex as something that’s for pleasure."

Similar to the United States, where abstinence-only sex ed has proven ineffective, this education is considered to be failing Puerto Rican youth and society. Not only are students graduating from high school with little knowledge of their bodies, and, for queer students in particular, confusion and shame surrounding their sexual desires and gender identity, they are also more likely to engage in unsafe sexual practices. Puerto Rico has the seventh-highest rate of syphilis in the U.S., and as much as 65 percent of pregnancies there are unintended, compared to the also-sizeable 45 percent in the contiguous U.S.

Across the island, other groups are stepping in to educate where the state’s curriculum has failed. None more visibly than Profamilias, an affiliate of the International Planned Parenthood Federation that, along with its reproductive health care services, provides comprehensive sexual education in K-12 schools — including teaching students how to identify sexual abuse — runs a peer counseling program where trained adolescents promote sexual safety, and maintains a hotline for young people seeking information on sex, contraception, STIs, and unwanted pregnancies.

“Students are leaving school without all the information they need and sometimes with misinformation over sexuality," Blanca Cuevas, executive director of Profamilias, tells Bustle. "Women don’t know their bodies. They don’t know their reproductive organs. They don’t have the accurate language to describe parts of their bodies. It’s hard for them to see sex as something that’s for pleasure, and, in other cases, there are women who are living in physically violent situations, and that has a major impact on them as to what sex is and the decisions they can make around sex.”

While Cuevas stresses the need for comprehensive sexual education in Puerto Rico’s schools, she also recognizes that there must also be a cultural shift through art, media, and entertainment. That’s why spaces like the one Papaya Tropical — whose own name is a play on cultural colloquialisms (“Papaya” is Latin American slang for vagina, while “Tropical” is a Puerto Rican term for “feeling good”) — is creating are crucially important. In addition to its informative articles, the group uses art and design to spread their pro-sex and empowerment message. On their website and at shops in San Juan, they sell body love and sex-positive merch, like condoms with packaging that reads “mereces orgasmos y risas” (“you deserve orgasms and laughter”), all designed by Vila. While on social media, they share original, and often hilarious, memes that followers love. "Que te chupen todo, menos la energía" (“Let them suck everything, but your energy”), reads one. “Pichar es crecer" (“to cut off, as in a partner who does not uplift you, is to grow”), says another.

“I have a very colorful mind. I always did, so this project has been a personal liberation for me," Dagma Rodriguez, Papaya Tropical’s editor-in-chief and the creative behind their memes, tells Bustle. Rodriguez says that growing up in Puerto Rico, there was a dogma around women’s sexual purity. For those who had thoughts or feelings outside those standards, it can feel like being "lost or a sinner."

“And then you get to your 20s, and you find yourself in machista [misogynistic] relationships with a man who wants you to be a puta [whore] in the bed but somehow still a virgin, who wants and expects you to know how to do everything but without the experience of doing it with anyone. So with all of these experiences, come these memes,” she says.

On a small island where rumors spread quickly and bad reputations can ruin you, Papaya Tropical is putting a spin on the traditional Spanish saying “dime con quién andas, y te diré quién eres” (“tell me who your friends are, and I'll tell you who you are”), choosing to surround themselves and uplift the work of other women who are boldly owning their sexuality in a culture where doing so could be dangerous. In the past, they have invited brujas — witches — to do sex and relationships-related tarot readings at their events, and this month they teamed up with the all-women jazz group Émina, who were celebrating the debut of their song "Kingky," about a woman who has no qualms asking for her kinky desires to be met, during the band’s release party.

The ladies, who see themselves as the sisters you can call on when you need help escaping an abusive relationship or are interested in exploring new techniques for pleasure, ultimately want to assist in building women’s confidence and knowledge of self so that they are empowered to make healthy and fulfilling decisions about their bodies and their lives. In their own Boricua terms, they want women to be “super jevas” — all-around badasses.