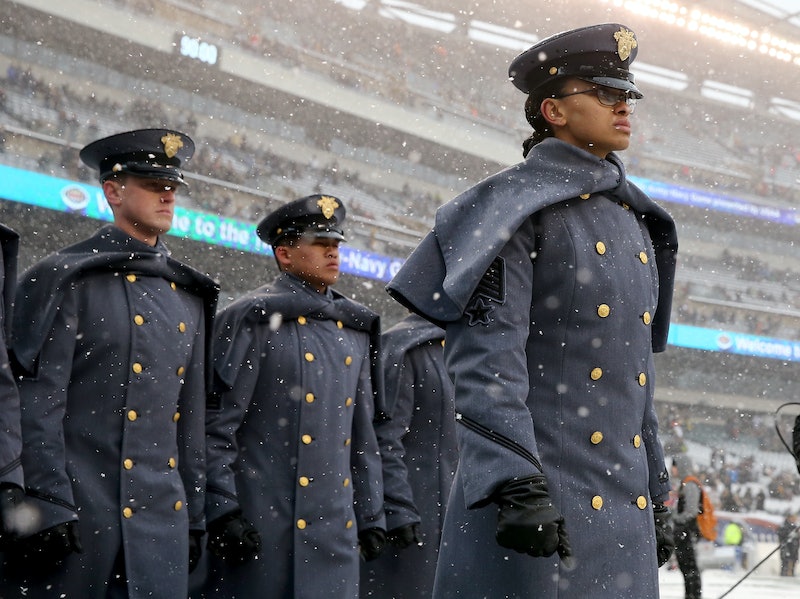 According to a Pentagon survey released on Thursday, sexual assault at U.S. military academies has increased by almost 50 percent in the last two years. The survey, which is conducted every year, is alarming to say the least. But on another level, it's concerning that sexual assault and harassment is so under-reported in the U.S. military that the real number could be far higher.

All cadets at West Point and a Navy and Air Force academy were allowed to participate in the annual survey, which amounts to about 12,000 cadets. Per the survey, there were 747 instances of unwanted sexual contact that were reported in 2018, in contrast to the 507 reported in 2016. The survey also reported that 16.5 percent of female cadets who participated in the study said they experienced unwanted sexual contact in 2018, compared to the 10.2 percent who said they experienced that in 2016.

Per Reuters, the Army released a statement following the survey, which confirmed that West Point would be creating a plan in the immediate future to confront the rampant problem. The statement said in part, “There is no room in the U.S. Army for sexual harassment or sexual assault. This is a readiness issue that affects our ability to prepare to fight and win our Nation’s wars as much as it is an issue of values."

She said, "We do not believe the trends in this year’s report reflect the time, energy, and commitment dedicated to eliminating sexual misconduct from the service academies." Instead, Van Winkle argued that the increase was simply a reflection of how deeply embedded this problem is in culture, and how long it will take to slowly change that culture.

Of course, there's also the possibility that these numbers don't tell the whole story, in terms of the prevalence of sexual assault among military cadets. Nate Galbreath, the Deputy Director of the Defense Department's Sexual Assault Prevention and Response Office, gave some insight as to why cadets and midshipmen face especially high stakes in these instances.

To reporters on Thursday via ABC, he said, "They want to graduate, they want to get out and they want to join the active force, so they don't want to report something that might impact that or hold them up."

Perhaps most tellingly, the survey revealed that only 56 percent of polled cadets believed that leadership roles are making efforts to stop the culture of sexual assault and harassment.

"This is a struggle," Van Winkle explained, via ABC. "Is this a societal issue? Is this a military issue? It doesn't matter to us, we pull from society and we are responsible for changing them to align with our core values."