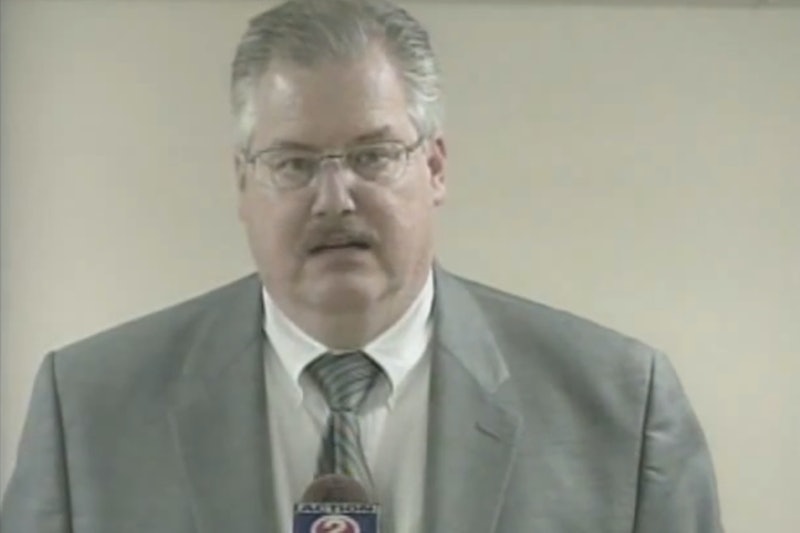 Making a Murderer fans will remember Ken Kratz as the special prosecutor brought in by Manitowoc County officials who convicted Steven Avery of Teresa Halbach's 2005 murder, but that's not the only way he's made headlines. Sexual harassment accusations against Ken Kratz have continued to be brought up as a footnote to the Avery case, and they're likely to continue to be a point of interest when Making A Murderer Part 2 debuts Oct. 19.

The Associated Press reported in 2010 that Kratz sent "repeated text messages trying to spark an affair with a domestic abuse victim while he was prosecuting her ex-boyfriend," citing a police report. The outlet states that the woman complained to police after receiving 30 text messages from Kratz in three days. After the AP broke the story, Kratz acknowledged sending the messages, and claimed he would continue serving as district attorney.

CBS News reports that the incident was referred to the Department of Justice, who found that he hadn't committed a crime, but should remove himself from the case, and he did. After criticism spawning from the AP's report made its way to Kratz, and after two more women came forward alleging he sexually harassed them, Kratz eventually resigned altogether in October 2010. According to NBC News, Kratz apologized for sending the aforementioned messages, but remained "mostly silent" on the other accusations. Kratz did not respond to Bustle's request for comment.

Kratz remains at odds with Avery's lawyers, even years after the initial trial. Avery was found guilty of murdering Halbach in 2007 and sentenced to life in prison, according to Newsweek, but the Making a Murderer documentary called into question some aspects of the investigation. And now, Avery's current lawyer is taking aim at some of Kratz's statements as they relate to the case.

According to local news website Patch, Zellner claims to have found more than a dozen "falsehoods" in Kratz's book about Avery that he published last year; she also takes issue with some of the statements he made during the original trial. Zellner told Patch that "we're consulting with defamation experts about the viability of a legal claim against Kratz. He has no absolute immunity. This guy is off the case, and he's still running around committing defamation against Steven Avery, essentially trying him in the press with even more false evidence, which is what he did the first time with his false (2006 pre-trial) press conference statements."

Kratz seems to stand by his book, and has also been critical of Zellner on his end, saying that her new motions in the case are "deplorable," according to The Wrap. He's also said that he'll watch Season 2 of Making a Murderer, but only so he can speak for the law enforcement's side. "I’m asked to be a spokesperson for the other side, for the prosecution, for law enforcement, for the conviction, for the Halbach family and I intend to continue to do that," he said, The Wrap reports.

Kratz probably won't be featured nearly as heavily in Season 2 of Making a Murderer, as he hasn't been as involved in Avery's case since the conviction, but it's clear he still has thoughts on Avery's situation. Whether or not to put any stock in what he has to say is up to viewers to decide.