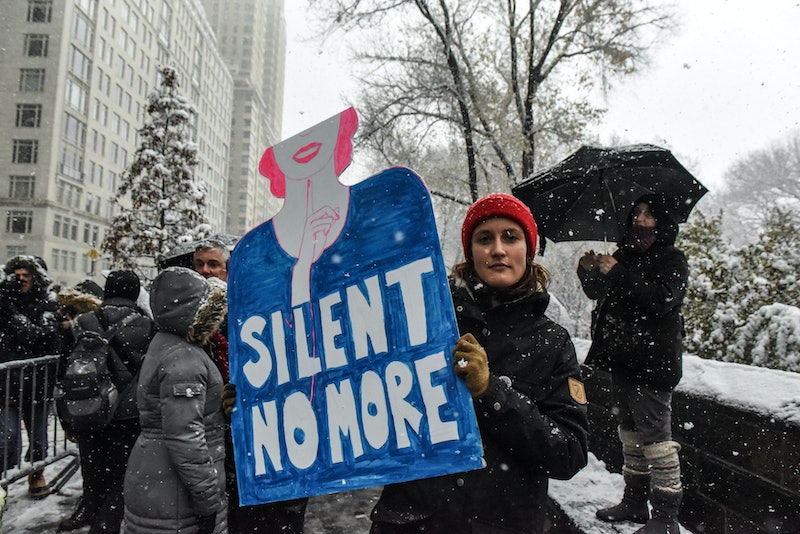 The #MeToo movement has officially swept through Washington, and the past couple months have seen numerous politicians brought down by allegations of sexual harassment. Victims finally are seeing their harassers face consequences for their alleged actions, but unfortunately, there's another side to that coin. According to a fresh New York Times report, there's a fair share of people looking to exploit sexual harassment claims for political ends. The newspaper found that people on both ends of the political spectrum are offering victims money in exchange for going public with their experiences.

In its detailed report, the Times describes how a number of partisan actors have begun offering money to victims who would agree to come forward to allege incriminating actions on the part of President Trump or members of Congress. Such stories already have forced the resignations or early retirements of several members of Congress, including Democratic Sen. Al Franken and Reps. Ruben Kihuen and John Conyers, as well as GOP Reps. Blake Farenthold and Trent Franks. Washington clearly has joined Hollywood as a place where sexual harassment allegations are making a huge splash. Victims' claims and experiences are now far more likely to be taken seriously, which has led to huge, sometimes career-ending repercussions for the harassers.

The difference is that in Washington, the people in power don't just control elements of culture, or the careers of the people who work for them — they run the government. Control of Congress is a numbers game, and the Times reports that several would-be sexual harassment lawyers and donors have come forward offering either to represent victims in lawsuits, or else directly pay for the publication of claims against members of one political party.

Of course, there's also the president, who's been accused of sexual harassment by at least 19 women (Trump has firmly and repeatedly denied those allegations). One of President Trump's accusers, Summer Zervos, filed a lawsuit against him in early 2017 that a judge is now deciding whether or not to dismiss. According to the Times, Gloria Allred, a lawyer who has often been involved in sexual harassment cases, is raising money for the case to pay expenses.

The would-be lawyers and donors who spoke with the Times, including right-wing conspiracy theorists like Mike Cernovich, all said that they only want to help victims speak out. It's bad enough to think that a victim could find themselves put through extra trauma to serve one side's political goals, but the deeper problem with this emerging phenomenon is that it threatens the entire #MeToo movement. “There is a danger in this environment that unsophisticated individuals who have been abused by powerful people could be exploited by groups seeking partisan advantage," Debra Katz, a lawyer who has often been involved in sexual harassment cases in Washington, told the Times.

Consider the sexual misconduct claims against Alabama Senate candidate Roy Moore, which were powerful in part because they came from accusers who supported Moore's party and who received no money for their actions (Moore strongly denied the allegations). The candidate's campaign attempted to smear the accusers by baselessly claiming that they had been paid, but the gambit didn't end up working — and Moore lost.

While an offer of free legal representation or other funding could convince a frightened victim to speak out in a way that's ultimately beneficial to to that victim, this emerging phenomenon is a dangerous one. If bad actors are able to paint high-profile sexual harassment victims as people willing to be bought and sold for their stories, it could reflect badly on the entire #MeToo movement — and ultimately lead to fewer people giving any credence to allegations of sexual misconduct.