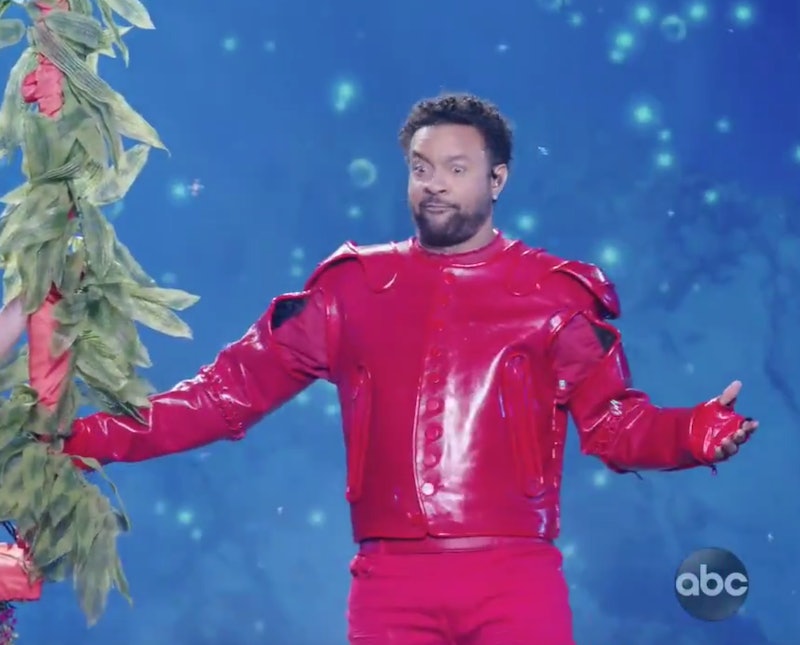 Twitter didn't exactly love The Little Mermaid Live!, but Shaggy's Sebastian costume was a particular low point in the production. Rather than one of the elaborate crab outfits the show's designers were clearly able to produce for other members of the cast, Shaggy just wore... a red leather jacket and pants.

You'd think the costume team would've at least given him something that resembled a crab's claws, but for some confounding reason, he wore matching red fingerless leather gloves. Fingerless! Leather! Gloves! He looked more like he'd stepped off of a motorcycle than out from under the sea. Like, come on, Auli'i Cravalho's Ariel got a fully functioning mermaid tail. Is this truly the best they could do? Did the entire budget go to Queen Latifah's Ursula costume? Whatever the case, Twitter definitely took notice.

A number of people compared Shaggy's outfit to Michael Jackson's look in his music video for "Thriller," while others referenced Britney Spears' red leather bodysuit in the video for "Oops! I did it again" and Eddie Murphy's red suit from his 1983 TV special Delirious.

"Did they really just put this man in a thriller jacket and red fashion nova jeans to make him Sebastian?!" wrote one Twitter user.

Another person compared it to a last-minute Halloween costume. "Shaggy's costume is like kid says he wants to be Sebastian for Halloween on Oct. 30 and mom tears through her closet to unearth an ill fitting mashup of stuff from the time she wanted to be Michael Jackson in college," @SporksOfFury wrote.

All of which is to say, this Sebastian costume had no place in a professional musical production. Shaggy deserves better! Justice for Shaggy! And more importantly, justice for Sebastian!

More like this
Austin Butler Recalls Lisa Marie Presley Showing Him Elvis’ Bedroom
By Jake Viswanath
You’ll Definitely Recognise Isadóra Bjarkardóttir Barney’s Mum
By Maxine Harrison
Lisa Marie Presley's Secret Granddaughter Was Revealed At Her Funeral Out Of Nowhere
By Jake Viswanath
Linda Ronstadt’s “Long Long Time” Plays A Pivotal Role In The Last Of Us
By Brad Witter
Get Even More From Bustle — Sign Up For The Newsletter
From hair trends to relationship advice, our daily newsletter has everything you need to sound like a person who’s on TikTok, even if you aren’t.