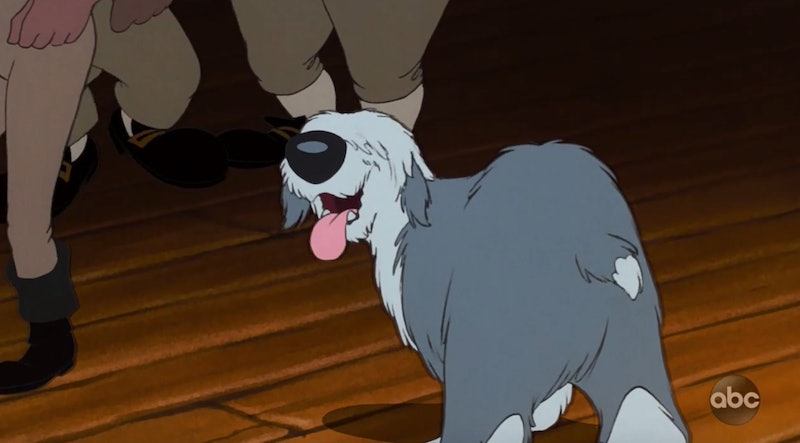 It only took five minutes for Prince Eric's dog in The Little Mermaid Live! to steal the show. During the musical special's opening number of "Fathoms Below," out popped Max — a real white and gray sheep dog who looks exactly like the one in the original 1989 movie. Immediately, he was Twitter's favorite part of the cast.

"So far my favorite actor in this live Little Mermaid is the actual dog playing Prince Eric's dog Max," wrote one viewer. Added another: "The dog is the best part of the little mermaid live I'm just sayin what a good boi the best boi."

The live production dipped back and forth between the original animated film and live, on-stage musical performances from the star-studded cast: Moana's Auli'i Cravalho as Ariel, Shaggy as Sebastian, and Graham Phillips (Riverdale, The Good Wife) as Prince Eric. But all of the promo ahead of the show failed to mention the most important part: one very glorious, well-groomed dog would also be in the cast.

Max plays a small but significant role in the animated movie, and the same seems to go for Little Mermaid Live!. In the film, he's there when Ariel spies on Eric for the first time from below his ship and eventually catches her scent and tracks her down. When a storm hits and the ship catches fire, he's nearly trapped and killed, but Eric risks his life to go back and save him.

Max may have stuck to what he knew for the live production (there's not a lot of interpretation when it comes to, you know, being a dog), but the rest of the cast put their own spin on their characters. Cravalho's Ariel is "a little bit more sassy," she told Variety. "I think she's got a little bit more spunk to her. She's strong and she wants to do something different from her parents and from those around her." She said she imbued her portrayal of Disney's Princess Moana with that same attribute.

Graham Phillips added new dimensions to Prince Eric, too. "If it wasn’t for [Ariel], he wouldn’t be alive and he wouldn't have his vitality back after God knows how long of him being in the dumps," he said. If it wasn't for Ariel and Max, that is.