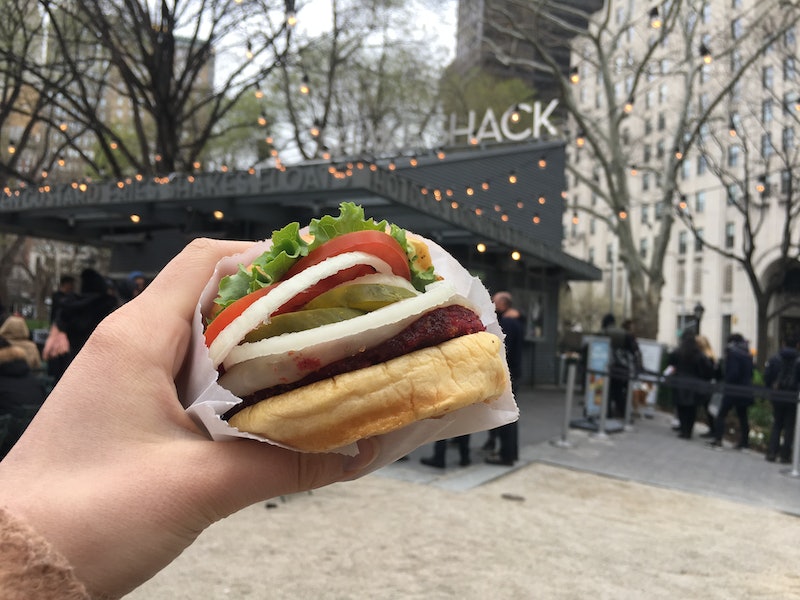 Like any millennial New Yorker worth their salt, I have consumed enough Shake Shack that the budgeting app I downloaded during a rare week of fiscal responsibility this past January passive-aggressively emailed me about it. And it looks like there's going to be a steady stream of those emails now that Shake Shack is testing new veggie burgers, because these, my friends, are a game changer. Once you try one of babies, you're gonna be all, "'Shroom Burger? Who is she?"

Not to shade the iconic 'Shroom Burger, but I should, for the purposes of this article, be honest: I'm not a veggie burger gal. I like my Shake Shack with plenty of meat, plenty of cheese, and sauced into the kind of oblivion that makes you take those perilously long blinks that might actually be micro-naps at your desk after lunch. Which is why, when we had the opportunity to sample Shake Shack's Veggie Shack — which will start officially testing on menus in the Madison Square Park, Upper East Side, and Astor Place locations in New York City, the West Hollywood and Glendale in L.A., and Domain location in Austin on April 24 — I was truly not expecting to be impressed.

What happened instead is that I'm eating my words as aggressively as I plan to eat the new Veggie Shack, which, to be clear, is a lot.

The burger patty itself is a combination of black beans, brown rice and roasted beets, which is then topped with provolone cheese, lettuce, onions, pickles, vegan mustard mayo. The first major difference between this and its predecessor, the 'Shroom Burger? It can actually be made vegan, if you skip the cheese and swap the regular bun out for the gluten-free option. The second major difference? This new veggie burger kind of transcends the idea of "burger" altogether.

The patty itself is rich, smooth, and flavorful, but without that overwhelming sense that one vegetable is overpowering the other, the way veggie burgers sometimes fall victim to doing. The consistency is very much like the typical black bean burger, but the beets give it a fun purple hue, and I'd argue that this combination has a more appealing texture than most black bean versions — maybe because it's coupled with Shake Shack's buns, which are so pillowy. The toppings give it an incredibly satisfying crunch and the sauce does an excellent job of tying it together; I honestly didn't even know the sauce was vegan until after I'd eaten it, because my practice in life is, as usual, "Eat now, read later." I would argue that it doesn't really need the cheese, which didn't add much for me; the burger and the sauce itself were flavorful enough on their own, and this is coming from a veritable cheese monster.

One of the Bustle editors who tried it is vegan, and a far more seasoned veggie burger consumer than I am, and was also impressed by the texture and taste of this new offering. And it certainly has a lot to compete with, now that more burger chains are hopping into the veggie burger market — most noticeably, the "bleeding" veggie burger, aka the "Impossible Slider," at White Castle. Shake Shack's version certain won't ~blood let~ like White Castle's will, but it's also not trying to be a meat burger; it knows what it is, and what is it is happens to be delicious on its own.

People will be able to order the Veggie Shack on the app starting this week, and in stores at the testing locations on April 24. Bring your Instagram game — I regret to inform you that my first thought upon seeing the slightly purple burger was not "Oh, look, a culinary innovation," but "OMG, so pretty!!" My shameless vanity aside, this is a veggie burger worth your buck.