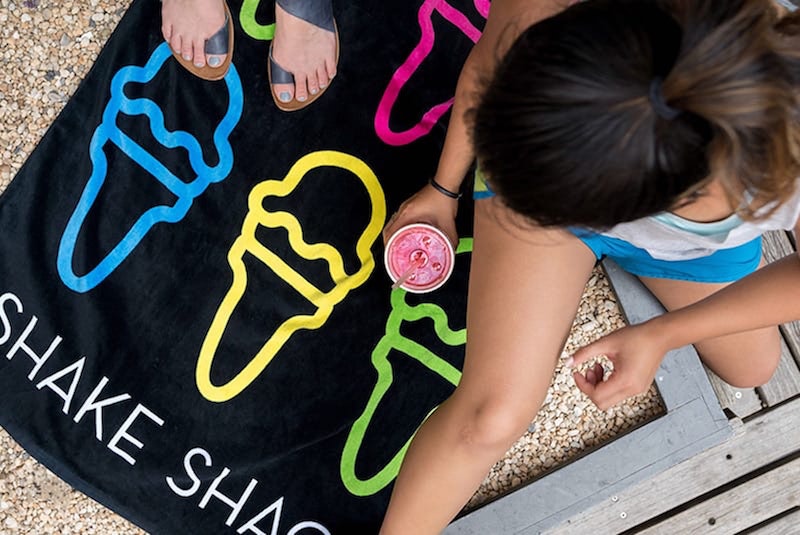 If you want to kick off Pride month by wearing something cool that benefits LGBTQ+ youth, the Shake Shack Pride capsule collection limited-edition Pride Month merch. The best part is that you can feel good about your rad new threads because 100 percent of the proceeds from the Pride capsule collection go to The Trevor Project, a nonprofit organization that works to support LGBTQ youth. To kick it all off, the Shack is also serving up a rainbow shake with festive sprinkles, exclusively available through their app, where $1 from every Pride Shake also goes directly to the youth organization.

Founded in 1998 by the creators of the Academy Award-winning short film TREVOR, The Trevor Project is the leading national organization providing crisis intervention and suicide prevention services to LGBTQ+ young people ages 13–24, according to The Trevor Project's website. And, helping them is as easy as getting your shake on.

The Pride Shake, which you can order via the Shake Shack app, is a rainbow-inspired treat made with a strawberry blended ice cream and lemonade, and it's topped with whipped cream and rainbow sprinkles. Grab your shake on the way to the beach, and pack your ice-cream-cone Pride capsule beach towel in your pride tote, which is adorned with a rainbow hamburger. You'll also want to snag the hamburger Shake Shack pride shirt, and a pick up a pride pin to put on your tote or jacket.

If the donations to The Trevor Project aren't reason enough to treat yourself to some new summer merch, the shipping is free, and Shake Shack notes on its website that it's dedicated to being a socially responsible company. "The majority of gear in the Shake Shack Shop is made from eco-friendly materials; manufactured by apparel companies that are focused on environmental and social responsibility," Shake Shack noted on its website.

The best part is that you can integrate these rainbow pieces into your wardrobe every month of the year to show your support for the LGBTQ+ community. If you don't know the history behind the rainbow as the symbol of LGBTQ+ pride, it's a pretty cool story. After being discharged from the U.S. Army, the late Gilbert Baker taught himself to sew and often created banners for protests at the request of gay rights activist and friend Harvey Milk. When Milk rode under Baker's first Rainbow Flag on June 25, 1978 at the San Francisco Gay Freedom Day Parade, the rainbow flag became a symbol of LGBTQ+ empowerment, according to Baker's website.

Pride month is celebrated every June to honor the 1969 Stonewall riots that took place in Manhattan and prompted a sea change for LGBTQ+ rights. Events are happening around the country all month long, and Shake Shack will be hosting events as well. If you want to get in the mix you can check Instagram for Shake Shack Pride month updates.

During Pride month, you can wear, eat, and slurp rainbow-inspired clothes, foods, and drinks like the Shake Shack Pride Shake to both show your support and fuel yourself for marching, activism, and Pride celebrations. However, if you want to cool off with the Pride Shake, you can only order it on the Shake Shack app, which is available for both Apple and Android.

If you're not sure how the app works, when you open it up, make sure your location services are enabled, and select "order now." The app will then show you a list of locations and you can choose the one closest to you to order your Pride Shake. When your shake is ready for pick up, you'll get a text letting you know. It's super easy to get your Pride Shake on and give to the Trevor Project at the same time, and that's something you can definitely feel good about.