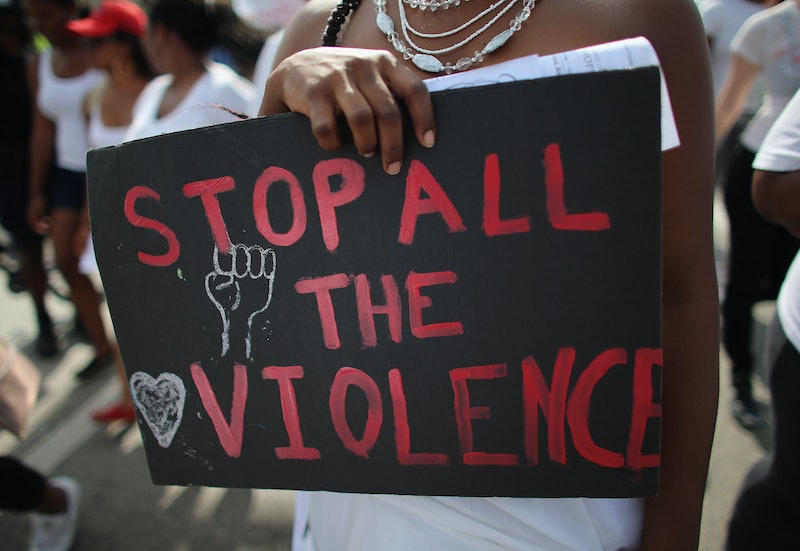 The head position at a federal office tasked with countering domestic violence still has not been permanently filled. And the president's nominee to lead the Office on Violence Against Women, Shannon Lee Goessling, is facing serious pushback from some women's rights groups who say that her views on domestic violence prevention are dangerous and ineffective. In the past, she has advocated for arming women as a way to prevent assault, but several experts tell Bustle that this is a misguided way to approach the issue.

"You do not armed battered women," CarolAnn Peterson, a senior lecturer in the University of California's Suzanne Dworak-Peck School of Social Work, and the founder and CEO of a group that educates corporations about the impact of domestic violence, tells Bustle.

"The reason for that," Peterson says, "is simply that unless battered women are out taking a gun course at the practice range every day, understanding how weapon works, it will get used against them."

The Office on Violence Against Women, per its website, "provides federal leadership in developing the national capacity to reduce violence against women and administer justice for and strengthen services to victims of domestic violence, dating violence, sexual assault, and stalking." One of its key responsibilities is overseeing federal grant opportunities for organizations that counter domestic violence. Goessling was tapped to head the office last summer, and her confirmation hearing was originally set to take place on Tuesday, but it has since been rescheduled for an undetermined date. In the meantime, an "acting" office director remains in place.

One piece of her resume that has advocates for domestic violence survivors especially troubled about is an amicus brief she wrote in 2008, in her then-capacity as chief legal counsel for the Southeastern Legal Foundation. In the brief, she argued in favor of arming women as a form of self-defense against violence.

"This right to use a handgun or firearm for self defense is especially important to women, the elderly and the physically disabled because their physical characteristics make them the most vulnerable to attack," Goessling wrote. "A firearm makes women, the elderly, and the physically disabled an equal match to their attacker, grants them the ability to deter crime before it occurs, or frustrate its completion and enables them to protect life and property."

Goessling's brief also quoted a researcher that claimed, "Women who are confronted with a sexual assault are significantly less likely to experience a completed rape if they resist with a weapon."

But several domestic violence experts who spoke to Bustle contested that logic. Tracy Tamborra, a professor in the University of New Haven's criminal justice department and former head of the nonprofit WomenRising, questions how claims like those made in Goessling's 2008 amicus brief could be scientifically backed up.

"How do you know?" Tamborra says of Goessling's argument to arm women. "So, oftentimes criminological topics are presented like this and there’s absolutely no way to do an experiment to answer that question. Can you imagine the social science experiment in which we have mock rapist go up to women who are armed and who aren’t armed and see what happens?"

She adds that the methods for testing such a hypothesis are either impossible or ethically prohibited. And moreover, she says, such research could traumatize study participants.

And in terms of what data is already out there, Julie Goldscheid, a law professor at CUNY School of Law, tells Bustle that, as far as she knows, "there is no respected research that supports the notion that owning a gun makes targets of intimate partner violence or sexual assault safer."

"To the contrary," Goldscheid says, "an abuser’s gun ownership is likely to make intimate partner violence incidents more dangerous, and even deadly."

Goldscheid adds that having a gun in a woman's home increases the chance that the weapon will be used on the victim or her family, not in self-defense against the perpetrator. Indeed, there is ample data indicating that gun ownership, at a base level, has a disproportionately negative effect on women versus men.

"It is crucial," says Goldscheid, "that the head of the Office on Violence Against Women understands the nature of gender violence and bases policy decisions on facts and data."