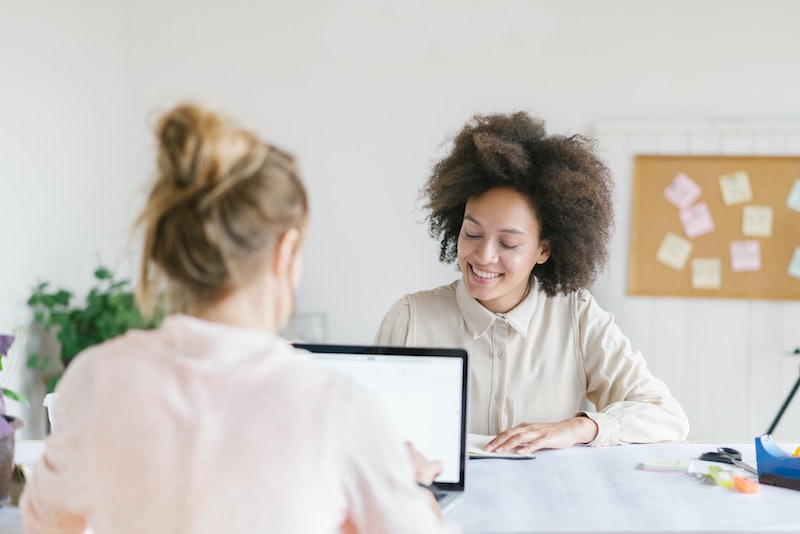 While working as a trader at a major bank, Joanna Lau noticed something odd. Her male colleagues were much more open to discussing their bonuses, but women kept quiet about their earnings. When Lau overheard her male colleagues openly discussing their bonuses on the trading floor, she tells Bustle, she realized her bonuses were less than theirs were. And upon talking with fellow women co-workers, she learned that other women weren’t receiving the same bonuses, either.

Lau, who is now founder and CEO of the handbag brand JEMMA, felt comfortable to talk with her former finance colleagues about their salaries, but it’s an awkward conversation for many women. As many spend Equal Pay Day reflecting on how to close the gender pay gap, one way to know for sure if you’re underpaid is to simply ask your co-workers.

But median pay for women with disabilities is 72 percent that of men with disabilities, an American Association of University Women report found, but disabled people on average make just 68 percent of what people without disabilities make. Meanwhile, transgender women are four times as likely to live in poverty than their cisgender peers, the Advocate reported in 2015, in large part because of discrimination and absence of legal protection.

Advocating for fair wages is important, not just for your lifestyle, but for your future earning ability. Aside from deserving the same salary for the same work, the wage gap hurts women’s ability to adequately save for retirement, Neha Prabhu, a certified financial planner and principal at Studio Investment, tells Bustle. “We are much more responsible for our finances in this time period than we have been in the past,” Prabhu says. “It’s important to be comfortable with [money] on all fronts.”

You can't ask your boss for a raise without knowing the right figure first. Talking to your colleagues about salary can help you pinpoint if and how much you're being underpaid compared to other staffers at your company or industry peers. But how do you do so without feeling weird? Here’s where to start.

Ask For A Range

If you’re uncomfortable with directly asking about their current salary, ask your co-workers for a reasonable salary range for your position, Lau says. “It’s not a direct way of asking someone else to share their information with you, but at the same time, it’s a way of getting a feel of where everyone else is.”

Go beyond the salary itself. When asking co-workers about compensation, Prabhu says women should also find out how long their peers have worked at the company, what their job descriptions are, and what their relationship is like with their bosses. These details will help you determine whether you’re being underpaid or if your colleagues are being paid more based on their responsibilities.

“Ask them, ‘How did you get to your position? What was your track through the company?’” Prabhu says. “Sometimes inequality can brew from unequal opportunities, which then turns into unequal pay.”

When talking with your colleagues about what they make, see if they know who is actually responsible for determining salaries. Find out if their manager has more leeway, or if it’s determined by someone else in the company, Prabhu says. Also, don’t forget to ask when your co-workers last discussed raises with their manager, she adds.

Don’t just talk to one colleague, and don’t solely rely on online sources like Glassdoor for salary ranges, because they can sometimes be inaccurate depending on different industries and companies. Ask men, women and nonbinary people in your office about what they make. That way, you can get a figure that’s closer to what you should actually be making, Lau says. Prabhu suggests asking others at similar companies with similar roles about their compensation, too. Start by hitting up industry peers within your network or professional associations you’re a part of and ask them about compensation patterns at their companies.

“Very often, women have a very good sense if there’s favoritism happening in their company culture,” Prabhu says. She suggests asking other women within your industry, “Do you have a feel for what the company culture is at your office? Do you feel that it’s generally male-centric or favorable? And if so, have you talked to anybody about it?’”

To ease the awkwardness, ask about compensation in a relaxed setting. Lau suggests discussing the issue over coffee, at lunch, or during an after-work outing. Some co-workers won’t feel comfortable with revealing their salary, so make sure you’re not too pushy about getting exact figures. Make sure your tone is more friendly and inquisitive, she adds.

Thinking back on her time in finance, Lau says she wished she had talked to her managers about her wage expectations sooner.

“Coming out of school, we tend to be a little more timid when it comes to setting expectations for compensation, for career goals,” Lau said. “Even though you think you’re trying to be nice by not overly expressing yourself or sounding overly aggressive, people don’t know what you want [and] they can’t help you get there.”

Yes, talking about money with your co-workers is awkward. But it's an important step toward improving your financial future. Go get your coins, sis.