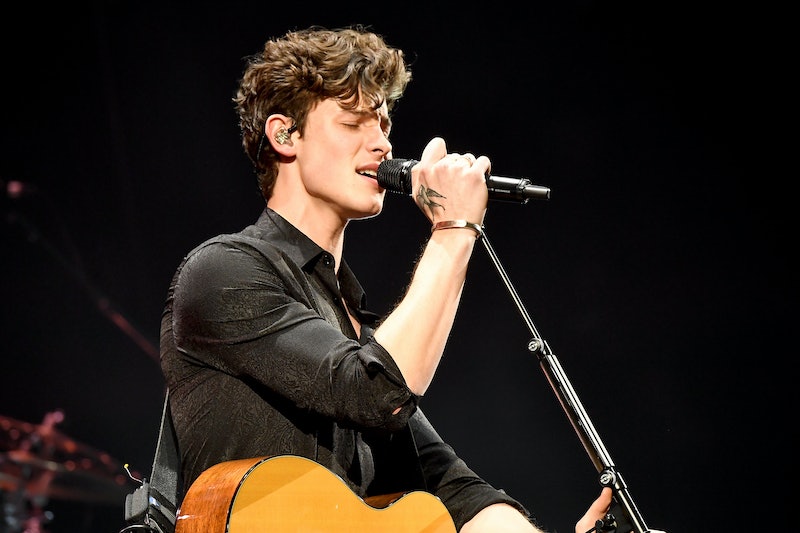 After honing his chops at five (five!!) awards shows last year alone, Shawn Mendes performed at the 2019 Grammys on Sunday night. He started out with a stripped down rendition of "In My Blood" as his piano slowly caught on fire from the inside. Then, as speculated, Miley Cyrus joined in for a surprise duet.

Ahead of the show, there were reports that Mendes and Cyrus were planning a collaboration. According to Teen Vogue, fans started getting suspicious after Cyrus, who's also set for a separate performance during the ceremony, shared a few post-rehearsal photos on Instagram that showed her sitting in front of what looked like Mendes' guitar and equipment. Not long afterward, both Mendes and Cyrus posted a picture posing together arm-in-arm: Mendes wore a leather jacket emblazoned with an image of Dolly Parton, while Cyrus captioned the image with lyrics from Parton's 1983 duet with Kenny Rogers, "Islands in the Stream." This was actually a lead-up for their performance at Friday night's MusiCares Person of the Year concert, which honored Parton, but apparently, they were inspired to team up once again.

The performance marked Mendes' Grammy debut, and his biggest awards gig yet: he's previously played at the ECHO Awards, Billboard Music Awards, MTV Video Music Awards, iHeartRadio Much Music Awards, and the American Music Awards, among others. Plus, he has four headlining tours under his belt, including a 22-date festival trek that ran from May through November last year, and he's about to embark on a massive arena run in March that he's likely been spending plenty of time prepping for. Suffice it to say, his live skills should be at their prime, though he was admittedly nervous to get onstage.

"To be completely honest, true and vulnerable with you guys — I realize that I care so much about what people think: whether it is whoever is sitting in the audience, or what people are thinking online or what people are going to write about the thing after that," Mendes said in an Instagram video leading up to the Grammys, per Teen Vogue. "I sit there and I just think in my head 'OK, what do I have to do right now to impress people?' and I realize that's the backwards thing and what I have to truly do is sit down and sing my song and truly connect with it ... because the only way people in the audience can truly feel is if I'm feeling it, too."

It was also a big night for Mendes nomination-wise. He was up for his two first-ever golden gramophones, including Best Pop Vocal Album for his self-titled third album, released last May, and Song of the Year for the record's lead single, "In My Blood," the acoustic-driven, Kings of Leon-esque rock number about his battle with anxiety that he played live.

"It was kind of something that hit me within the last year. Before that, growing up, I was a pretty calm kid, super steady," Mendes told Beats 1's Zane Lowe of the track last March, per People. "I knew people who had suffered from anxiety and found it kind of hard to understand, but then when it hits you, you're like, 'Oh my God, what is this? This is crazy.' That song is complete truth and the best thing about it is, it's not all down. The whole reason I wrote this song was to be like, at the end, 'It's not in my blood to do that.'"

Ultimately, Mendes lost Best Pop Vocal Album to Ariana Grande's Sweetener, but he still has a fighting chance to snag Song of the Year. Either way, he certainly left his mark on the stage.