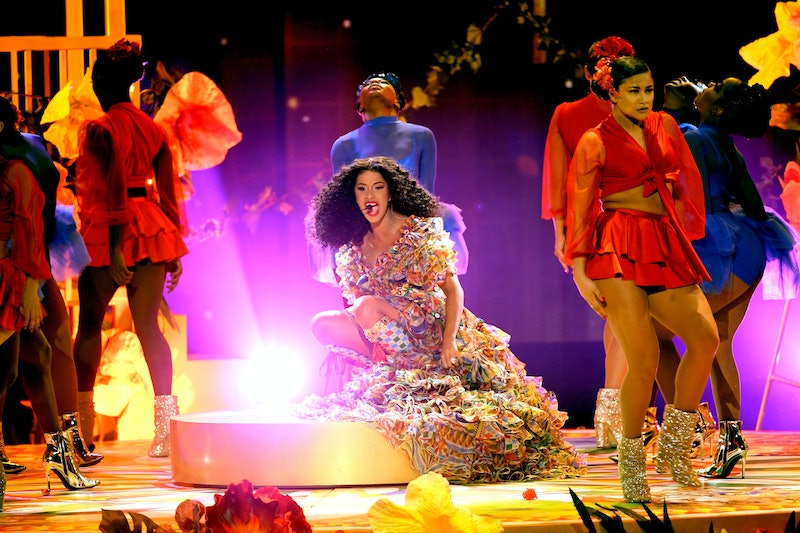 The Grammys celebrate what's best in music every year. From Best Album to Best New Artist, there are so many categories, it's hard to keep track. But, because it typically features performances from all genres and generations of music, the show is always super entertaining. The 2019 Grammy performers that were just announced are sure to bring the audience to their feet, along with any fans at home. So far, the performers are a pretty young group of artists, but they definitely represent a diverse rage of genres.

This is only the first group of performers to be announced, and it's full of pop's favorite artists. In a press release obtained by Bustle, the Recording Academy announced that Camila Cabello, Cardi B, Dan + Shay, Post Malone, Shawn Mendes, Janelle Monáe, and Kacey Musgraves would grace the Grammys stage. The rest of the night's performers will be announced at a later date.

This will mark Cardi B's second performance at the Grammys. She took the stage last year with front-runner Bruno Mars to give fans a new iteration of their collab, "Finesse." This year, she's nominated in a ton of categories, including Record Of The Year for "I Like It," featuring J. Balvin and Bad Bunny. Her debut album Invasion of Privacy is also nominated for Best Rap Album and Album Of The Year. She's also nominated for Best Pop Duo/Group Performance with Maroon 5 ("Girls Like You"), and Best Rap Performance ("Be Careful"). This is also the second year for Kasey Musgraves, who is up for four Grammy Awards including Album Of The Year with Golden Hour and Best Country Song for "Space Cowboy." She's already a two-time Grammy winner, so this definitely isn't her first rodeo.

Meanwhile, Dan + Shay will be making their Grammys debut and celebrating their very first nomination. They're up for Best Country Duo/Group Performance for their hit "Tequila." Post Malone has had such a big year that it seems like he's been a veteran for a hot second, but it's actually his first time as well. He's nominated for four awards including Record Of The Year for "Rockstar" featuring 21 Savage, Album Of The Year with Beerbongs & Bentleys, Best Pop Solo Performance for "Better Now," and Best Rap/Sung Performance "Rockstar."

Last, but certianly not least, Janelle Monáe will no doubt be putting on one of the most memorable performances of the night. The groundbreaking artist is nominated for Album Of The Year with Dirty Computer and Best Music Video for "PYNK." She's been nominated in years past, but unfortunately has never won.

As with anything involving artists and their stans or massive fanbase, social media is going to blow up with news like this. There were a few harsh takes.

There were also a lot of positive reactions online. Cabello's fans were especially happy with the news, as were Cardi B's fans. She's already expected to have a huge night, so it's only right.

Regardless of who wins, these performers are going to have a superb night when they hit the STAPLES Center on Feb. 10 for the awards, which will air live at 8:00 p.m. ET/5:00 p.m. PT on CBS, and be hosted by Alicia Keys.

And, hey, if none of these performers have you excited, then be patient. Maybe your fave will be announced next.