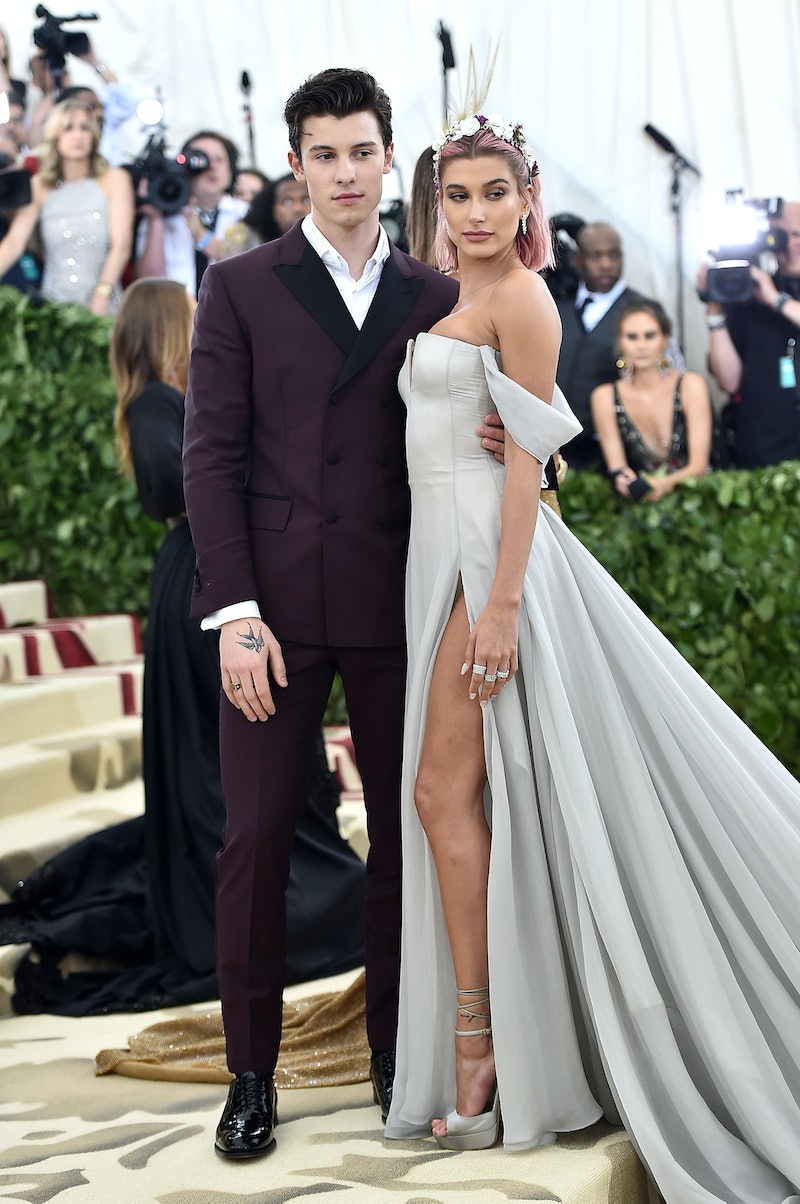 He's either the chillest ex ever, or maybe there was actually some truth to the whole "just friends" thing. In an interview with ETALK (as reported by Us Weekly) on June 18, Shawn Mendes opened up about Hailey Baldwin and Justin Bieber, who are rumored to be dating, though neither star has confirmed anything either way. And it sounds like Mendes is totally cool with it. (Bustle reached out to Bieber's manager and Baldwin's rep for comment on the dating rumors, but did not receive an immediate response.)

When asked by the Canadian entertainment show about Baldwin and Bieber's seemingly on-again romance, Mendes — who, like Bieber, calls Canada home — couldn't really comment on the couple's exact status. "I don’t know if they’re dating or not," he said.

Even if it turns out that they are an official item, though, Mendes had nothing but nice things to say about his one-time supposed flame and the "Friends" singer. "I think that’s awesome," Mendes told ETALK about Baldwin and Bieber maybe-dating.

"I love them both," he continued. "They’re both really awesome people. When I first started out, everybody was like, 'Oh, how do you feel about being compared to Justin [Bieber]?’ I was like, 'What do you mean, how do I feel?' That’s the best thing anyone could say to me. He’s the man."'

Mendes, 19, first gained notoriety in 2013 for covering pop songs from stars like Bieber and Ed Sheeran on Vine, according to USA Today. Since both he and Bieber hail from Ontario, Canada, and since they both got their start by performing on social media — Bieber was discovered on YouTube around 2008 — critics often compared the two stars early on in Mendes' career.

Despite the perceived similarities, Bieber would go on to show support for the "Stitches" singer, tweeting to his millions of followers in October 2016, "Shawn Mendes voice makes me smile. Truly a gift to be able to move peoples emotions through songs! So proud of you brother! Great album!"

As for Mendes' relationship with Baldwin, he and the 21-year-old model were first snapped spending time together back in October 2017, which quickly led fans to speculate about whether or not the two were dating. The rumors reached a fever-pitch a few months later in May, after the young stars attended the 2018 Met Gala together.

Alas, both Mendes and Baldwin would later confirm that there was no truth to the romance reports. "No, we were not making our big debut [as a couple]," Mendes told People of attending the Met Gala with Baldwin. "Obviously Hailey and I are friends," he continued, "and it was just really cool for me to be able to walk with her because she's a vet and it was my first year, so it kind of took the pressure off a little bit... I was thrilled to be able to go with her."

Baldwin echoed Mendes' sentiments in an interview with The Times of London shortly thereafter, telling the publication, "[Mendes and I] hang out and he's super lovely and a very, very nice young gentleman. But I am single," she said at the time.

Flash forward a few weeks later, and Baldwin doesn't exactly appear to be quite so single anymore. On June 8, the model was snapped getting flirty with Bieber while hanging out in Miami, according to Us Weekly, and the pair — who reportedly dated on and off between 2015 and 2016 — was snapped strolling the streets of New York together a few days later as well.

Neither Baldwin nor Bieber have publicly commented on the current status of their relationship, but it seems like they're enjoying each other's company at the very least. Regardless, if things do end up getting more serious between the two, they've clearly got Mendes' blessing.