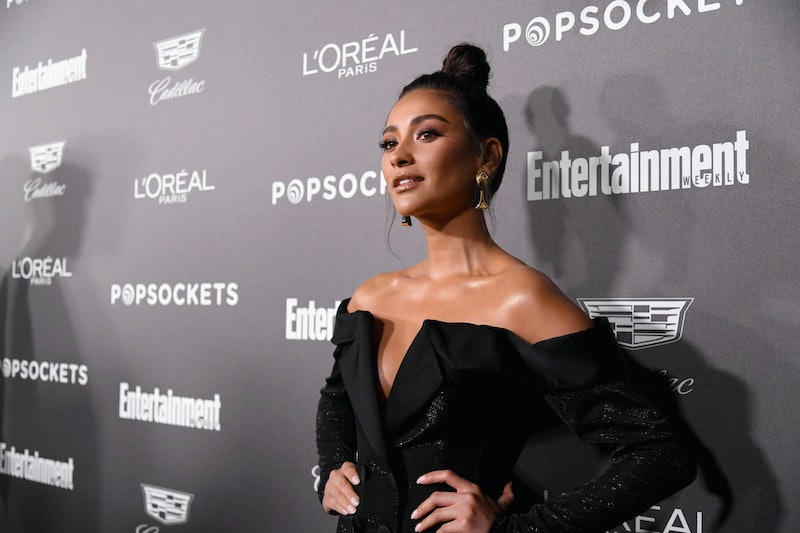 These soon-to-be parents couldn't be more excited! On Saturday, Shay Mitchell's boyfriend Matte Babel celebrated her pregnancy announcement with a supportive message on Instagram. Mitchell surprised fans with the news that she is 6 months pregnant on Friday, posting a picture that showed off her baby bump on Instagram. The star also shared a YouTube video about the big news as well, which took a closer look at what the past months keeping the secret had been like for the couple. Soon after her announcement, Babel shared a post of his own on social media, including a photoshoot picture of Mitchell and some emotional words about his longtime partner.

In addition to the black and white photo, Babel also shared a sweet message for Mitchell on Instagram, emphasizing what an incredible mother the star is going to be. He wrote:

"Watching the both of you grow over the past 6 months has been the most beautiful thing in the world.The strength, vulnerability and grace you've had during this pregnancy has left me in awe, you're going to be an incredible mom...We're lucky to have you, love you."

Babel's friends and fans of Mitchell commented on the post, sharing plenty of congratulatory messages for the couple. The Pretty Little Liars' star's boyfriend appeared several times in her initial announcement on YouTube, and it's clear both are looking forward to parenthood.

On Friday, Mitchell shared a picture from her pregnancy photoshoot on Instagram as well, writing, "Does this mean I'm allowed to drive in the car pool lane at all times now?" Several of Mitchell's former Pretty Little Liars costars commented on the post to celebrate the big news. Lucy Hale wrote, "Congrats Shay!!" with a crying, heart, and star emoji. Ashley Benson chimed in as well, commenting, "I love you my girl. I can't wait," and Janel Parrish wrote, "Congrats gorgeous!"

Mitchell's big news is especially emotional, as the star has been open about wanting to become a mother in the past. In 2018, Mitchell revealed she experienced a heartbreaking miscarriage, as per People. "Having so many people follow me on Instagram and read my posts is both incredibly humbling and hugely uplifting," she wrote on her Instagram Story at the time. "The support and affection that so many of you show me lifts me up during even my darkest days, one of which happened last year after I miscarried and lost the child of my hopes and dreams."

Mitchell's announcement video on YouTube, which was titled "Guess Who's Preggers", further explained her decision to keep the early days of the pregnancy private. "I didn't want to come out on social media so early on," she said. "I'm going to be so happy when this comes out and I can just be pregnant." The video also revealed that Mitchell and Babel would bring more updates to fans in the form of an upcoming web series titled, "Almost Ready," which will premiere on July 17.

According to Elle, Babel and Mitchell were first linked in 2017, though the couple have kept the relationship private. His supportive post isn't the first time he's posted a relationship update with Mitchell on Instagram. In February of 2018, Babel posted a throwback selfie with Mitchell, writing, "Always pause for a good pic and tell her how much you love her before admitting you forgot the wristbands at home #tbt."

Though the couple kept the baby news private at first, it seems that both Mitchell and Babel will likely share more updates on social media from now on. It's clear that these parents are ready for their next adventure, and it seems that Babel will continue to be so supportive of Mitchell along the way