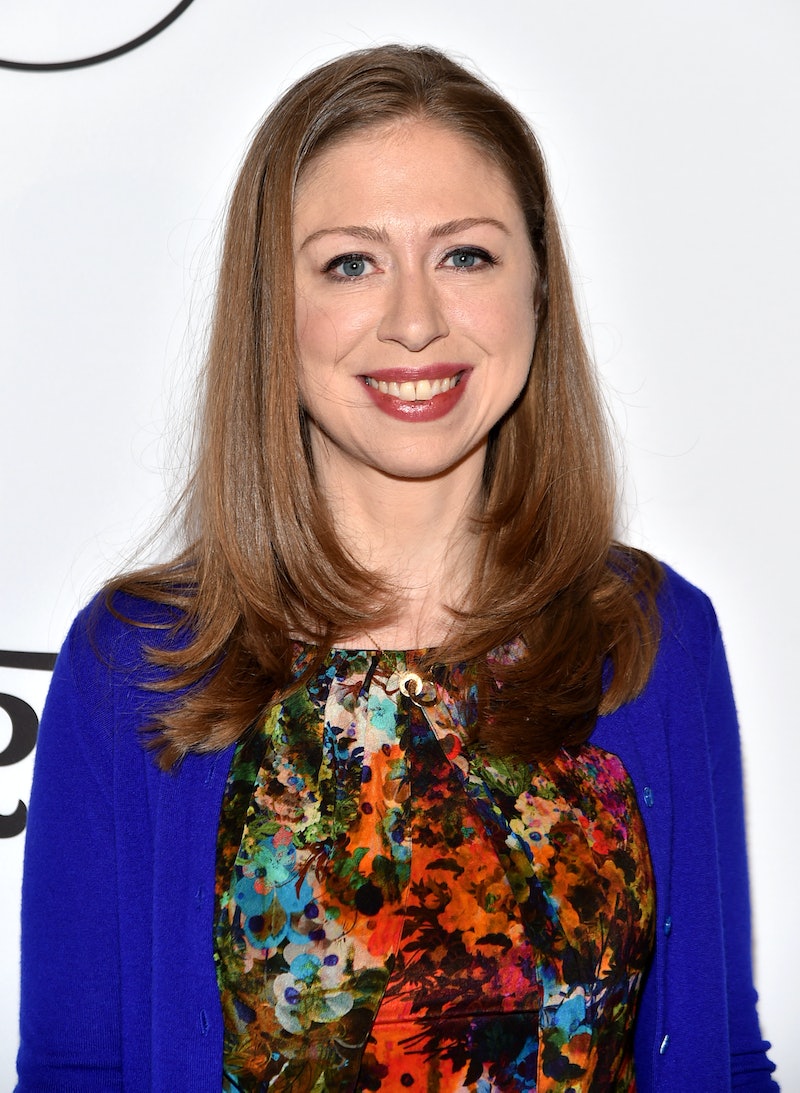 It was a moment of unprecedented, accidental inspiration for women across the country; a motto for the resistance was breathed to life by the most unlikely of people. But Chelsea Clinton took that rallying cry one step further and used it as a catalyst for her new children's book, She Persisted: 13 American Women Who Changed The World.

"I was thinking about how to explain that moment to my kids, because I talk to my kids every morning about the world," Clinton tells Bustle. "I read the news headlines. I talk about what’s going on in the world." She began thinking about the women who had inspired her in her life and the obstacles they — like Sen. Warren — must have overcome in their journeys to not only succeed personally, but change the course of America history too. Together with her editor and illustrator Alexandra Boiger, she worked "furiously" over the coming months to complete the book, which was released on May 30, just months after Sen. Warren's stand against Sen. McConnell.

Some of the names from She Persisted will be familiar — such as Harriet Tubman, Oprah Winfrey, Sally Ride, or Helen Keller — while others — like Clara Lemlich, Virginia Apgar, or Claudette Colvin — may be entirely unknown to children and parents alike.

"Each of them overcame real opposition, sometimes directly because of their gender — like being told it’s outrageous for women to work," Clinton says. "So many American women have been such an essential part of our country’s history — not only because of their ethos and dedication, but also because of their persistence."

She Persisted by Chelsea Clinton, $10.79, Amazon

In fact, the 13 have little else in common besides that persistence; they are black, Latina, Native, white, and they come from all different backgrounds. They are dancers, athletes, politicians, judges, astronauts, doctors, activists, and average citizens who simply kept pushing, even when doing so was challenging or dangerous. Each woman is given a two-page spread: on one side is Clinton's brief description of their accomplishments; on the other side is a quote from that heroine — a chance for these women to tell their own stories in their own words.

"I wanted their words to be heard through the pages of She Persisted," Clinton says. "I hope that the short description of these women’s persistence — not only the remarkable things that this woman has done in her life or did in her life, but also, the opposition that they overcame to be able to do work that has made our country healthier, more equitable, or full of greater beauty — stretches the outer boundaries of our imagination."

The book is, however, more than a feel-good picture book. It is intended as a tool for contextualizing modern political events. After all, what happened to Sen. Warren (and to Chelsea Clinton's own mother, Hillary Clinton, the original "nasty woman") did not happen in a vacuum. It goes without saying that America has a dark history of sexism and racism that has made it much more difficult for women — particularly women of color — to get ahead. The book, however empowering, does hinge upon a sad reality: the girls reading this book will have a harder time succeeding or being respected for their work, simply because they are girls. This has become all-too-apparent in the age of Donald Trump. But although the book couldn't quite be described as cheerful, it approaches that truth with a heaping dose of optimism.

"My friend Dr. Paul Farmer... [he] says that optimism is a moral choice," Clinton says. "I believe that. I believe that cynicism is the reservoir for those who want to maintain the status quo. I have no interest in maintaining the status quo. I have a deep interest in creating and defending a world where we have less sexism, racism, homophobia, xenophobia, and Islamophobia."

The last page of She Persisted is an ode to Clinton's belief that progress is possible: it shows an illustration of a black girl, standing proudly below a portrait of her adult self: the President of the United States.

"...remember these women," it reads on the page. "They persisted and so should you."

Join Chelsea Clinton for an empowering evening of conversation and readings at Symphony Space in New York City on Sat. June 24 at 6pm. She will be joined by actors of stage and screen Annie Q (The Leftovers), Alexis Bledel (Gilmore Girls) and Jessica Pimentel (Orange Is the New Black) that will inspire kids and adults who are ready to take on the world.

She Persisted by Chelsea Clinton, $10.79, Amazon