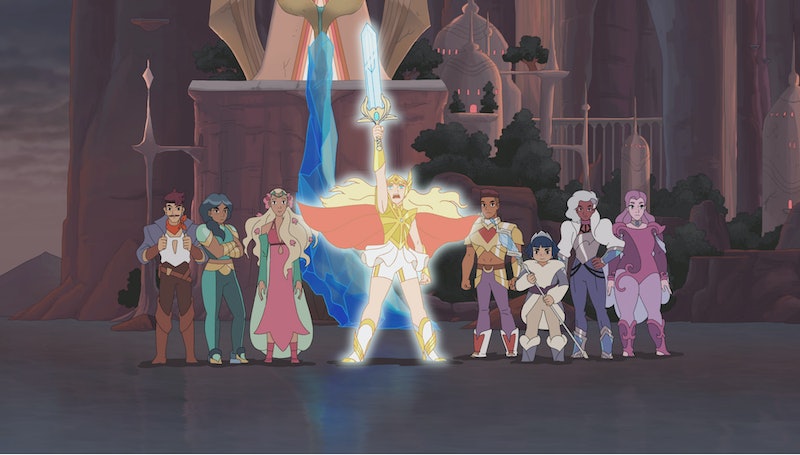 There's a character in Netflix's She-Ra and the Princesses of Power who refers to a dance party as a "social experiment," and in that moment I, a grown woman watching an animated series geared towards a generally younger audience, felt seen. This will likely be a common experience for those watching this new take on an '80s classic, regardless of age or gender expression. Even if you don't like traditional princess stories or what they represent in the media, there's a character on this show for you. In an interview with Bustle, creator Noelle Stevenson discusses how She-Ra and the Princesses of Power is giving a voice to the types of characters who don't often get time in the spotlight and redefining what it means to be a princess.

"My approach to [She-Ra] was to sort of broaden what an audience of young girls means," Stevenson says. "The aesthetic of the show is both glitzy and girly, and also kind of action/adventure-centric. I really wanted to reach those girls who feel a little bit weird, who feel like they just sort of like a little bit of everything, and not any one specific type of show that might already exist or is marketed towards one narrow idea of what gender is."

Whatever their gender identity is, she says, hopefully She-Ra's audience "can see themselves in these female characters and male characters and just all the characters that we're presenting in this world." The aforementioned dance party, called "princess prom," is an excellent example. At prom, some of the girls show up in gowns; others in suits. The only character whose midriff is showing is Bo, one of the only boys. It's a simple, subtle way to give representation and remove binaries from children's entertainment.

"I know a lot of people who are like, 'Oh, I don't want my daughter loving princesses too much,'" Stevenson says. "'I want her to love, you know, other things, the things I like.' But what's wrong with loving princesses?" She-Ra and the Princesses of Power defines princess in a different way than we're traditionally used to seeing in media. They're not damsels in distress; they build a rebellion. They're not focused on marriage or being pampered; instead, they're leaders in their respective kingdoms — and in our world, where the most recognizable princesses IRL are activists and humanitarian leaders Meghan Markle and Kate Middleton.

She-Ra's princesses also have supernatural powers and are a source of contention. "We see them from the point of view of the villains in the first episode," Stevenson says, and "the first look that we get of the princesses is, 'they're evil and scary,' because the Horde is afraid of them — so basically they are talking about princesses, but you can almost imagine that they're talking about vampires."

I'm reminded of Sophia McDougall's 2013 New Statesman article "I Hate Strong Female Characters." In it, McDougall complains about a recent run of heroines who are tough and feisty but still lacked depth. "All princesses do kung fu now," the article wryly notes, and if you as a feminist are over female characters whose only show of agency is brute strength, you might be wary of a series in which the princesses are rebel warriors. This, however, is not that kind of show, either.

She-Ra and the Princesses of Power does not define femininity or masculinity in any one way. In the rebellion, some of the princesses weaponize their hair and flowers; others like to punch things. Adora is scared of dancing, but her heart melts when she meets a pony. Stevenson and her all-female writing team created a group of diverse characters with all sorts of complicated strengths, weaknesses, proclivities, and flaws.

She-Ra also deepens the role of its supporting characters, making sure to treat them as fully formed characters whose stories are also important. Glimmer, a princess in her mother's shadow whose powers don't always work and who becomes Adora's sidekick, is one such example.

"A character like Glimmer might just be comic relief in another show," says Stevenson, but "we're taking her struggles and her narrative seriously instead of just being like, 'Oh, she's just a silly girl.' I wanted to be kinder to those types of characters and give them the center stage. That was really important to me." Even the villains are treated with care, humor, and respect.

Midway through Season 1, a character snarks that She-Ra is "just like every other princess. All sparkle, no substance." It feels like a commentary on how we've viewed cartoon princesses for years. But She-Ra is determined to have it both ways — its princesses may sparkle, if they want, but they have substance, too. Whether you love all things pink, prefer blazers to ball gowns, or feel like you don't fit in anywhere because you like a little of everything, there's a Princess of Power for you.