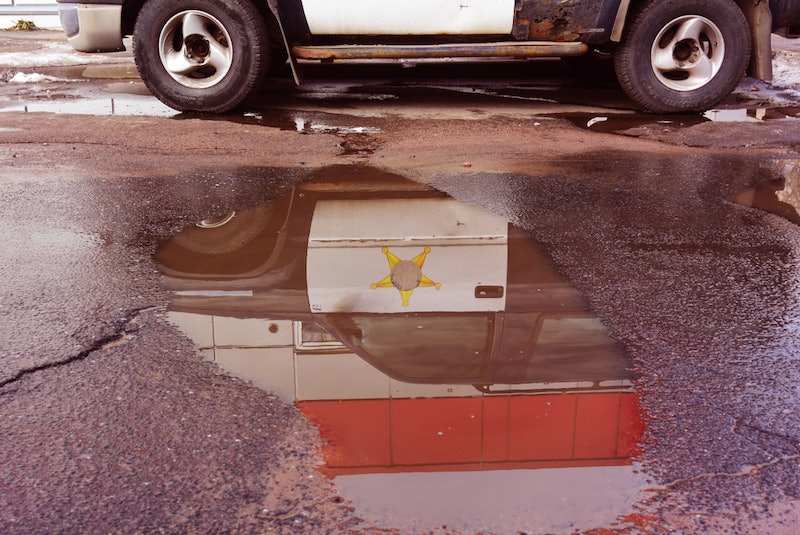 The movement to enact gun violence prevention legislation has been picking up steam in states across the country, but the new laws are only worth anything if the authorities are willing to enforce them. And in some places, it's starting to look unlikely that local officials will be jumping up to do that. "Gun sanctuary counties" are the pro-gun version of sanctuary cities, and in some places they could actually prevent new gun violence prevention laws from going into effect.

So far, sheriffs and county commissioners in rural Washington, Oregon, New Mexico, and Illinois have expressed their determination not to heed the new laws put in place by Democratic state legislatures, according to Reuters. The idea, Reuters wrote, came from the movement of sanctuary cities that protect immigrants, which became well-known in the United States after President Donald Trump won election partly based on his anti-immigrant rhetoric. With the gun sanctuary counties, the idea is the same — local officials are just pledging not to enforce the laws that come down from the state government if they see them as infringing on citizens' Second Amendment rights.

“Unfortunately for the governor and the attorney general, they’re not my boss. My only boss is the people that elected me to office," said Sheriff Bob Songer of Washington state's Klickitat County, according to Reuters.

The movement has spread locality by locality in response to specific laws passed at the state level in the aforementioned states. In Colorado, for example, the Fremont County Board of Commissioners passed a resolution calling itself a "Second Amendment sanctuary county" after Colorado passed a so-called "Red Flag" bill, which allows law enforcement officials or people close to a gun owner to temporarily take firearms away from a person believed to be at risk for harming themselves or others, according to The Denver Post.

Elko County in Nevada is another place that's taking steps towards becoming this kind of a sanctuary city after Nevada passed a law attempting to close the so-called "gun-show loophole," according to the Elko Daily Free Press.

“I do believe if you purchase a gun from a dealer, you should have a background check,” said Elko County Sheriff Aitor Narvaiza, according to the Elko Daily Free Press. “But if I want to sell a firearm to a friend of mine I’ve known for 20 years, I should be able to do that.”

The gun sanctuary movement certainly has its vocal opponents, however. Democratic New Mexico Gov. Michelle Lujan Grisham came out strongly against her state's gun sanctuary counties on Twitter, calling the officials promoting the movement "bad-faith critics" in a series of posts in late February.

"A few law enforcement officers in this state have been making noise about how they won’t enforce gun safety measures because they don’t like them," Grisham tweeted. "That’s not how laws work, of course, and it’s not how oaths of office work either."

She went on to say that the movement is just the latest defense of a position that stands contrary to the overwhelming research, which states that more gun safety legislation helps prevent gun violence.

"Opponents of firearm safety measures can’t debate on the factual merits of these bills, so they turn to hyperbole, falsehood and fear-mongering," Grishan wrote. "Thus, we now have a few 'sanctuary' counties – political posturing & dangerous, cynical pandering."