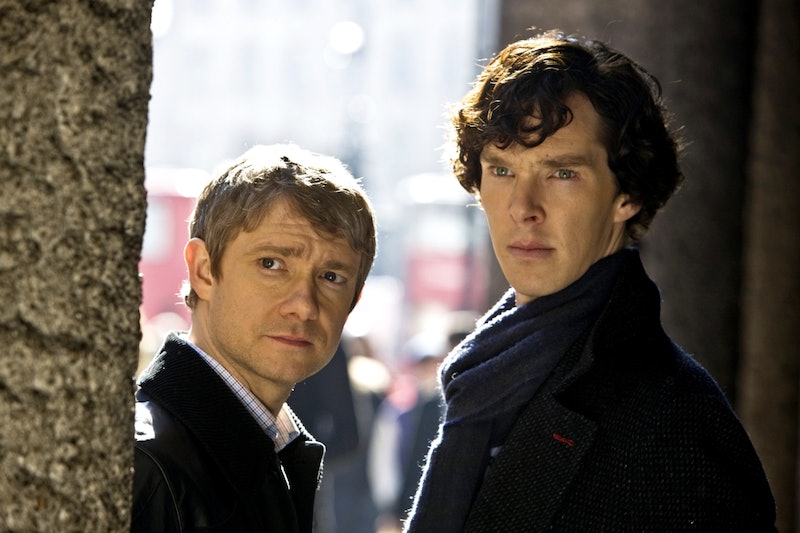 After you watched the ultimate episode of Sherlock Season 4 — "The Final Problem" — you were probably left thinking that the problem was indeed final. As in, this was the last season of Sherlock. After all, the co-creators, and even the actor who plays the titular detective, have been outspoken about the high possibility that the BBC hit will not return. But, what if I were to tell you that it might not be time to say goodbye just yet? If you take into consideration all the hints about Sherlock Season 5 — shared by the co-creators themselves —the future looks brighter. (OK, fine, marginally brighter.)

Steven Moffat and Mark Gatiss have been been offering audiences, fans, and reporters soundbites about the possibility of a Sherlock Season 5. Unfortunately, none of them are particularly clear. Then again, what would be the fun in that? Arguably, part of the delight in BBC's version of Sherlock is the waiting and the guessing, the secrecy and the cliffhangers. There's always been a sense of mystery — even outside of the show's plot lines.

Wouldn't it be the greatest Sherlock-ian twist, then, if after all this time of hinting that Season 4 would be the finale, instead Season 4 was just the beginning? Stay with me. It's possible that we'll be seeing a lot more of the Baker Street boys. Just maybe not the way we're all used to, and definitely not anytime soon.

I think what has actually happened is we have now done the story of how the Sherlock Holmes and Doctor Watson that you’ve always known became those men. It’s actually a backstory and we never intended it to be, but the reason to leave it at that place is that actually if we do come back — and we’d love to come back — then we could have it absolutely start with a knock on the door and Sherlock saying, ‘Do you want to come out and play?'

If the series does end up concluding, it's not for lack of source material. There are many, many untapped Arthur Conan Doyle stories. In fact, as Gatiss has previously pointed out, in Arthur Conan Doyle's canon "The Final Problem’ was then followed by another 40 stories." You do the math.

But, it also won't be due to lack of ideas from the two creators. While speaking to Collider back in August of last year, Moffat said, "Hopefully, we’ll do more. I find it hard to imagine that we won’t. But in terms of a specific plan, there are ideas that we haven’t gotten to yet." Gatiss added, "We’ve been percolating a few things. We’ve got some ideas."

As for these ideas, they all seem to circle back around to meeting the Baker Street boys at a later date, when time and experience have made them even wiser. In that vein, it sounds like if Season 5 were to happen, none of the plot points from Seasons 1 through 4 would return to 221B. Things would be completely and totally fresh, save for the two main characters and probably their address.

To back this up, Moffat told the crowd during that same screening that Sherlock

...isn’t as smart as Eurus or Mycroft, he’s just always going to win against them because he is better and stronger and that is him becoming the Sherlock Holmes of Basil Rathbone and Jeremy Brett… The wise old man of Baker Street we’re used to who’s still terrifying and cold but has a heart that we never doubt.

Rathbone and Brett were actors who portrayed Sherlock in both film and TV. They were definitely a bit more seasoned than BBC's rendering of the character.

So, if Sherlock does return for a fifth season, it sounds like it'll be a whole different game — and a whole different Sherlock. Whether or not we'll ever be made privy to that "wise old man of Baker Street" can only be be elucidated with more time. And, hopefully, with more hints.

More like this
The 'PLL: Original Sin' Creators Say A’s Identity Will Be “Very Clear” By The Season Finale
By Alyssa Lapid
Every Horror Movie Reference In The 'PLL: Original Sin' Premiere
By Alyssa Lapid
'The Sandman’s Ending Is A Departure From Neil Gaiman’s Comic Book Series
By Kadin Burnett
Netflix Just Rebooted A Classic ‘90s High School Drama
By Maxine Harrison
Get Even More From Bustle — Sign Up For The Newsletter