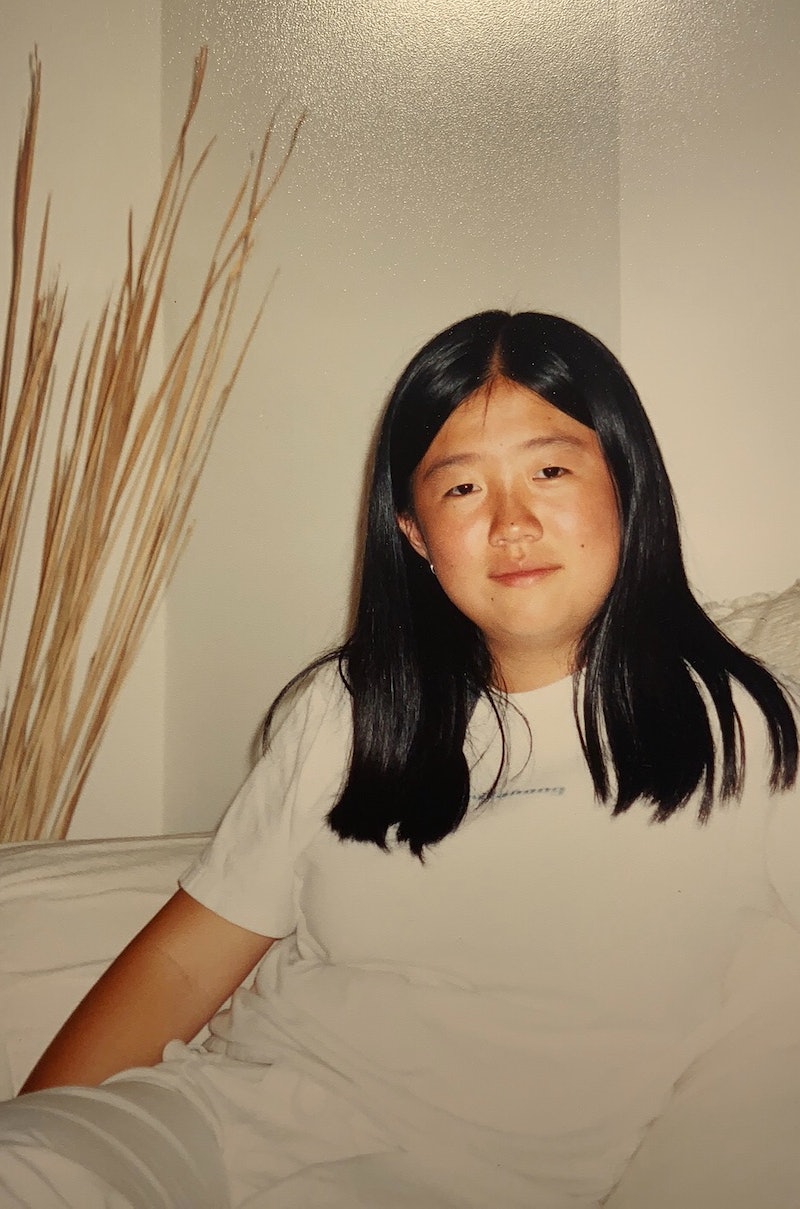 In this personal essay for Bustle's All American: Growing Up series, Sherry Cola, star of Freeform's Good Trouble, shares how her dad influenced her growing up, when she learned to come out of her shell, and what her American dream is.

When I was four, my parents and I immigrated to America. Even though I was so young, I remember feeling like a visitor in a foreign country and to be honest, sometimes that feeling still creeps in. From the first time I experienced getting flipped off by a stranger and not knowing what it meant, to hearing people laugh at my mother’s broken English — I felt like an outsider. With that said, my early adolescence was a full chapter of my life where I tried to lay low and fly under the radar. I didn’t want to do anything that stood out and expose myself for ridicule. I kept it safe and quiet.

I remember in junior high, my dad bought me a super bright turquoise jacket and made me wear it to school. As soon as I got out of his car, I walked into the building and instantly took it off. Neon-colored clothing was a big “no” for me in my early years. The jacket was screaming “look at me!” — the opposite of what I wanted to do. On top of that, I was incredibly self-conscious about a red backpack I had to wear, it had a huge strip of Velcro attached instead of the classic zipper. Any time I needed to reach into my bag, I had to rip the Velcro open and I could just feel heads turning around to look at me. I used to linger in the back of class for nearly five minutes, slowly peeling the Velcro apart to prevent the obnoxious sound that was sure to follow.

My dad never wanted anyone to doubt that our family somehow didn’t belong in this country.

My ultimate goal: stay discreet. From haircuts to body language, nothing about me was loud. I was the definition of a wallflower. My dad desperately wanted me to fit in with the other American kids, from getting my ears pierced in third grade to getting acrylic nails in seventh grade. Anything he envisioned as a “rite of passage” the other kids were experiencing, he wanted that for me. While I admired my dad’s confidence and willingness to experience all that he felt the U.S. had to offer, I also felt intimidated and embarrassed to say something when we didn’t see eye to eye. My dad never wanted anyone to doubt that our family somehow didn’t belong in this country. Growing up, he would tell me stories about how he was “captain” of his grade at my age, and how he was extremely close to gaining fame in China. There was so much to live up to. He set the bar high and I never felt like I was enough.

When I was in ninth grade, my parents divorced and my dad moved out. He and I bumped heads (as many teenage daughters and dads do), so of course I blamed myself for the split. Once I was living with my mom full-time, I almost instantly felt relieved of the standards that my dad had enforced. I dabbled in marching band, ran for student body president, joined film club, lived my best life on the pep squad — all with zero fear of disappointing anyone. I realized how much I could shine by just being me. I started to make people laugh and discovered what it’s like to have a bold presence, and not shy away in the background. The biggest shocker: I ended up with the title of “Most Outgoing” my senior year of high school, which is something I never thought I would have ever qualified for.

Even though I felt stuck in my dad’s shadow for many years, I am so thankful for my past and the way I grew up. My relationship with my dad has evolved as I’ve become an adult. It’s cool to see how alike we actually are and how much he’s influenced me in a positive way. When I was little, one of his part-time jobs was at a local Los Angeles radio station as a Chinese on-air personality, so it’s no coincidence that I followed in his footsteps and got my start in the entertainment industry in radio. I looked up to him, and I still do. He’s a major reason why I strive to break stereotypes and work hard to show people that you can pursue and achieve your dreams. I wouldn’t be where I am today if it weren’t for my dad and making him proud is part of my American dream.

More like this
The Best Memes & Tweets About The Discontinuation Of The Choco Taco
By Alexis Morillo
The 4 Most Forgiving Zodiac Signs
By Kristine Fellizar
How This Founder Turned Her Antidote To Doomscrolling Into A Business
By Anna Scott
The 3 Most Honest Zodiac Signs, According To Astrologers
By Kristine Fellizar
Get Even More From Bustle — Sign Up For The Newsletter