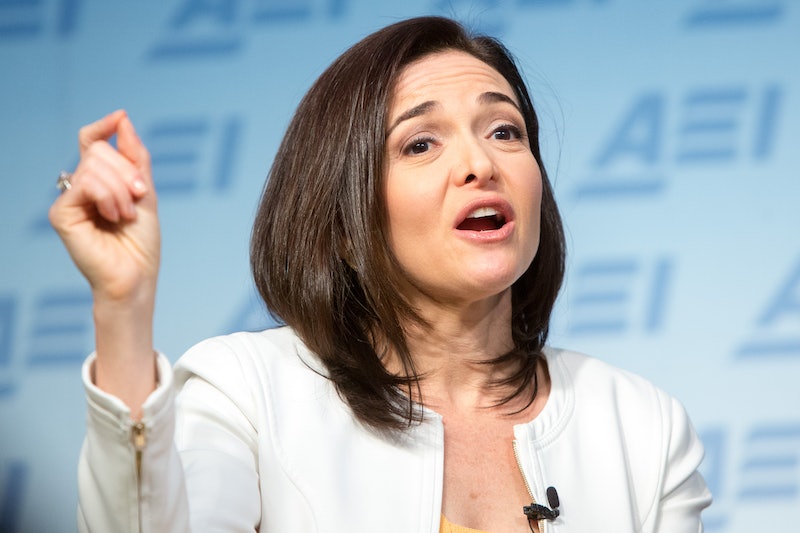 On Sunday, Facebook's chief operating officer, Sheryl Sandberg, took to the social media website she helps run to express her solidarity with the torrent of women who have been coming out with stories of workplace sexual harassment. In a Facebook post, Sandberg claimed that even in one of the company's most senior positions, she still receives unwanted sexual advances from coworkers.

In her post, Sandberg attributed the prevalence of sexual misconduct at work to pervasive power imbalances that largely serve to elevate men over women, stating that "systemic, lasting changes" were needed to fix this.

We need systemic, lasting changes that deter bad behavior and protect everyone, from professionals climbing the corporate ladder to workers in low-paid positions who often have little power. We need to end the abuse of power imbalances due to gender — and race and ethnicity, too. We must not lose this opportunity.

Sandberg was quick to point out that she had never been sexually harassed by someone she directly worked for. "The fact that this could be considered lucky is a problem in itself, but based on the numbers, I am lucky," Sandberg said. She did, however, describe being sexually harassed by men "in the course of doing [her] job," which she attributed wholesale to uneven power dynamics.

I didn't work for any of these men. But in every single one of these situations, they had more power than I did. That's not a coincidence. It's why they felt free to cross that line.

She described a hand reportedly being placed on her leg under a table during a meeting; would-be mentors who supposedly suggested meeting alone late at night; one man who, when rejected, she claimed banged on her hotel door until she called security. She said that as she has ascended the corporate ladder, instances like these have occurred more and more infrequently. But from time to time, she said, she experiences unwanted sexual advances from "men who, in that moment, feel that they have more power than I do."

For employers, she offered six tips which primarily focused on decentralizing power from men and placing it on a set of rules and processes which seek to protect alleged victims. First of all, she said, people need to "understand right from the start what's expected of them." She suggested establishing this through workplace training that delineates a standard for respectful behavior.

Secondly, she said, all alleged victims and claims of misconduct should be treated with "seriousness, urgency, and respect." In the same vein, her third recommendation was that alleged victims should be protected from stigma and retaliation, which she said should be embedded into the investigative process.

Her last three points underscored her first three: apply the investigation process consistently, "take swift and decisive action," and let "enablers and failed gatekeepers" know that they are "complicit when they stay silent or look the other way."

In her post, Sandberg acknowledged that with the recent watershed movement to unmask perpetrators of sexual misconduct, men in senior workplace positions might hesitate to enter situations where they will be alone with female employees. Sandberg did not view this as an excuse for management and mentors to favor men:

Doing right by women in the workplace does not just mean treating them with respect. It also means not isolating or ignoring them – and making access equal. Whether that means you take all your direct reports out to dinner or none of them, the key is to give men and women equal opportunities to succeed.

Sandberg also clarified that these power dynamics were not limited to the male/female binary, but extended to "people of color, LGBT individuals, and members of religious minorities and underrepresented groups of all kinds."

It wouldn't solve all the problems we face if more women were in power — although I believe we could get quite a lot of good done. But one thing's for certain: many fewer people would be groped and worse while trying to do their jobs. And that would be a major step in the right direction.