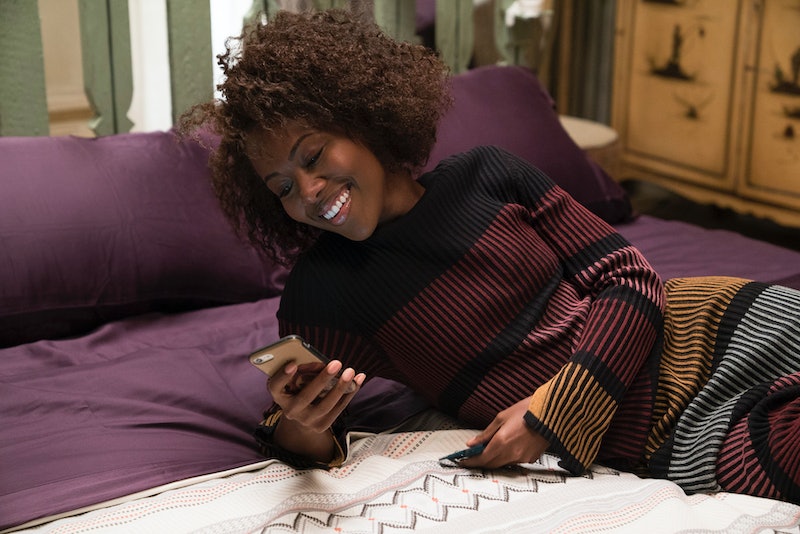 Light spoilers ahead for She's Gotta Have It Season 1.

With a 90 percent approval rating on Rotten Tomatoes, it's safe to say that Netflix's She's Gotta Have It is a rousing good time. Modernized for the millennial generation but maintaining a similar feel to Spike Lee's classic '80s film of the same name, the series follows Nola Darling, an artist and self-proclaimed “sex-positive, polyamorous pansexual,” and tackles numerous themes in its 10 episodes including sexuality, gentrification, and police brutality. But what really makes She's Gotta Have It so powerful is its handling of sexual harassment. And according to actress DeWanda Wise, this is one of the biggest reasons viewers should tune in.

In the first episode of the new series, Nola walks home from a friend’s apartment late at night when a man calls out to her, “Sexy! Sexy! What’s your name, girl?” Nola rebuffs his advances, before he attempts again, with, “Ayo, ma!” After she rejects him for a second time, he grabs her by the wrists and calls her a b*tch. Nola fights him off and is able to escape, but the incident causes her to suffer serious trauma, which follows her throughout the rest of the season.

During a time when more women than ever before are coming forward to share their own #MeToo stories, Wise couldn't be more excited to tell such a vital story. "I feel like [the theme of the entire show and particularly this scene] is mirroring the conversation that is happening right now [about sexual harassment in Hollywood and beyond]," Wise says to Bustle. "And I’m glad that we can add to it."

The results of A Washington Post poll show that 54 percent of American women have dealt with “unwanted and inappropriate sexual advances” at some point in their lives. Although the stats are devastating, Wise is hopeful that She's Gotta Have It can affect society's attitudes towards sexual harassment and assault. "I wouldn’t be an artist if I wasn’t super optimistic about the power of images," Wise says, "and as much as it’s powerful for women, especially black women, to see themselves reflected [on screen in a liberated sense], it’s also important for men to see themselves and go, 'oh, I do that,' both in a relationship context or just out in the street with strangers and to correct their behavior accordingly."

"I wouldn’t be an artist if I wasn’t super optimistic about the power of images."

Wise's Nola eventually channels her hurt into a street art campaign to raise awareness about the harassment women in her neighborhood and beyond face on a regular basis. The fictional scene and campaign was inspired by the work of Tatyana Fazlalizadeh, a Brooklyn-based artist who launched the "Stop Telling Women To Smile"campaign in 2013. Following the release of the series, Netflix created the #MyNameIsnt campaign to inspire women to take back their power on the streets and share their own catcalling stories.

Beyond tackling street harassment and sexual abuse, Wise also hopes She's Gotta Have It inspires women to really explore themselves outside of what their friends, family, and society thinks. "I was that super confident girl in high school and then I got to college and realized that a lot of my confidence was tied to my family and what they thought," Wise says. While Wise makes clear that this wasn't necessarily a bad thing, she notes that she in turn spent years analyzing, reflecting and searching for her true self.

"It was definitely a battle [to get to this place], but for so many of us it’s just a matter of taking the first step," she says. "It’s about allowing yourself the peace and the mental space to really think about what you want your life to look like sexually or professionally. It’s a privilege to take that space and women don’t take it enough."

The original film has been continuously praised for its portrayal of a sexually-liberated woman at a time when being so was frowned upon by society. And while this new edition follows suit, She's Gotta Have It definitely differentiates itself with its powerful messages on awareness and hope.

More like this
The 'It's A Sin' Creator Revealed A Massive Detail That Didn't Make The Final Cut
By El Hunt
Jamie-Lee O'Donnell Will Tell The Real Story Of Derry In A New C4 Docu
By Rachel Mantock
Britney Spears Met The Weeknd & Sam Levinson, So She May Actually Be On 'The Idol'
By Jake Viswanath
'Obi-Wan Kenobi' Takes Place After This Key Star Wars Movie
By Arya Roshanian
Get Even More From Bustle — Sign Up For The Newsletter