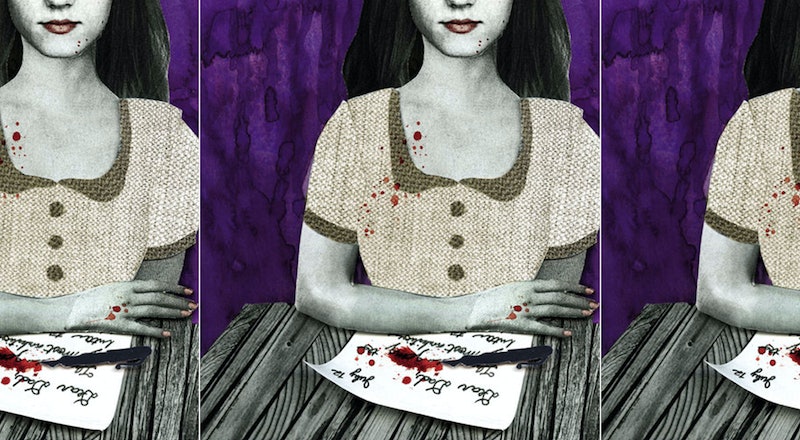 In 2018, there is no shortage of true crime-inspired content — in podcast feeds and Netflix queues, on the fiction and nonfiction shelves of bookstores and libraries. Our entertainment cup runneth over with stories of real-life mysteries and murders. But long before Sarah Koenig interviewed Adnan Syed for Serial, before Law & Order began scooping on headlines for episode ideas, and even before Truman Capote wrote his famous account of the Clutter family murders in In Cold Blood, author Shirley Jackson turned to true crime for inspiration. A chilling bildungsroman about a college student who comes completely unglued, her novel Hangsaman was inspired by the real-life disappearance of Paula Jean Welden, who went out for a hike one fall day and never returned.

Jackson was living in North Bennington, Vermont on December 1, 1946 when 18-year-old Paula Jean Welden disappeared. A sophomore at Bennington College, where Jackson's husband Stanley Edgar Hyman was employed at the time, Welden worked at the school's dining hall. After finishing a double shift, she went back to her dormitory where she changed into a red coat, sneakers, and jeans before telling her roommate, Elizabeth Johnson, she was heading out to take a "long walk." Welden left around 2:45 that afternoon, and when she still had not returned the next morning, the college President called her parents to see if she had gone home. She hadn't.

Welden's father immediately left for Bennington, where the local police along with hundreds of Bennington students, staff members, and local residents formed search parties. Classes were even suspended so everyone could help, but the search, which was later criticized for being poorly organized and unhelpful, yielded nothing but dead ends. A group of hikers confirmed seeing a girl who matched Welden's description on the 270-mile Long Trail, and a driver came forward with a claim that he picked up a hitchhiker matching the missing girl's description, but neither lead resulted in concrete clues to Welden's whereabouts.

Welden's disappearance captured the attention of not just the local community, but people — curious citizens, concerned police departments, committed reporters — from all across the country. The local authorities left no stone unturned, literally: they even dug up a gravel pit in search of Welden's remains. Using what was at the time new technology, police subjected suspicious individuals to polygraph tests in the hopes of uncovering the truth. When their efforts didn't turn up any leads, police from other states were called in to help. Newspapers desperate to get the scoop hired private detectives to search for clues. Welden's father offered a cash reward to anyone who could find his daughter, alive or dead, and at one point, he even consulted a psychic as to her whereabouts. Despite all of this, though, Weldon was never found.

What happened to Welden that day in 1946 remains a mystery, one that has spurned numerous conspiracy theories, urban legends, and ghost stories. Because of where she vanished — near the Glastonbury Mountain, an area which is said to be a cursed ground — Welden's story has even become the stuff of folklore. Her disappearance is frequently referenced in legends about the Bennington Triangle, a geographic area in Southern Vermont where, much like the more famous Bermuda Triangle, a series of vanishings have occurred. It is also counted by some theorists as evidence of a potential serial killer in the area.

But Welden's story didn't just inspire local folk tales, it inspired famous novels, too. Her disappearance was supposedly one of the inspirations for The Secret History, author and former Bennington student Donna Tartt's bestselling debut. It was also apparently the inspiration behind Jackson's second novel, Hangsaman.

Set at a liberal arts college not unlike Bennington, Hangsaman tells the story of seventeen-year-old Natalie Waite, a girl longing to go to school where she can finally be free of her sad home and her awful parents. Only once she arrives on campus, Natalie realizes college life doesn't bring her the happiness she craved, but rather, a whole new set of fears, anxieties, and personal tortures. Bit by bit, Natalie's world begins to unravel until she is no longer sure of what is real, and what is just her twisted imagination.

According to the publisher's official description, Hangsaman is “loosely based on the real-life disappearance of a Bennington College sophomore in 1946" — loosely being the key word. The setting looks and feels like Bennington, and the troubled heroine at the novel's center bears a resemblance to Paula Jean Welder, but what happens in the stories is all Jackson. A mesmerizing tale of psychological terror, Hangsaman is a chilling novel inspired by true crime and folklore.

Jackson lived in Bennington when Welden mysteriously vanished, and it is possible she even joined in on the search that captivated the entire town. Whether or not she went into the woods looking for Welden, there is no way Jackson was able to avoid hearing about the missing girl or the theories that were born out of her puzzling disappearance. It is also likely the author was aware of the dark folktales about Glastonbury Mountain and the surrounding area, folktales that existed long before Welden took that fateful walk into the mysterious woods, and that continue to be told and retold today.

More like this
16 Novels That Paint A Realistic Portrait Of Abortion
By K.W. Colyard
Lauren Rae Is Bringing Back The Sex And The City Vibes In Her New Memoir
By Shahed Ezaydi
'The Summer I Turned Pretty' Book Ending Is An Emotional Rollercoaster
By K.W. Colyard
The Guide To “Witches Stairs” & Why They’re Actually Great For Small Spaces
By Emma Garza
Get Even More From Bustle — Sign Up For The Newsletter