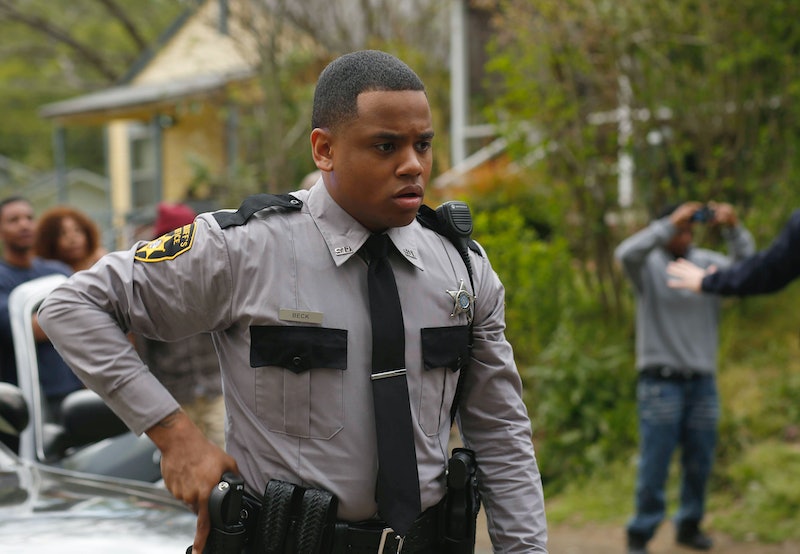 America is embroiled in a national conversation about the relationship between race and policing. The Guardian's The Counted found that, between 2015 and 2017, police officers killed 2,038 Americans. A number of those deaths — including those of Mike Brown, Tamir Rice, Eric Garner, Philando Castile, Alton Sterling, and Rekiya Boyd — gripped national headlines and helped birth the Black Lives Matter movement. Network television has responded to this national conversation in two extreme ways: Either skirting the issue altogether or attempting to capture the multilayered issue in a single episode. But FOX's new 10-episode miniseries, Shots Fired, disrupts that binary. Rather than devoting a standalone story to the issue, as series like Scandal and black-ish have done, a police shooting is the driving force of its plot.

The opening scene of Shots Fired shows Joshua Beck (Tristan "Mack" Wilds), a sheriff’s deputy in a rural North Carolina town, fatally shooting a college student during a routine traffic stop. In a questionable plot twist, Beck is a black police officer whose victim is white. On the surface, it’s improbable that a white person will be killed by a black police officer. Not only did The Washington Post conclude that black Americans are 2.5 times more likely to be fatally shot by police officers, but according to a 2015 report from the Bureau of Justice Statistics, only 12 percent of local police officers are black.

However, rather than using the victim’s whiteness to neutralize the impact of racial bias in police shootings, Shots Fired mines the shooting to expose the disparate treatment of white and black victims of police violence. When two Department of Justice investigators, Ashe Akino (Sanaa Lathan) and Preston Terry (Stephan James), arrive in North Carolina, they discover that the fatal shooting of a black teenager has been disregarded. The black teenager’s mother has been warned by local authorities to remain silent about her son’s death or risk having her children removed from the home and placed in foster care.

A white student’s death generating a federal investigation while a black teenager’s death remains unexamined is sharp commentary on the mistreatment of victims based on the perception of their worth. It recalls #IfTheyGunnedMeDown, a hashtag that went viral soon after Brown died in August 2014. Black Americans used the hashtag to share two different photos of themselves, one they believed the media would use if they were killed and one they'd prefer to have plastered on newspapers.

#IfTheyGunnedMeDown spawned from the media's rush to fault victims, like Brown and Trayvon Martin, for their own deaths, mining their social media feeds and school records for any perceived deviance. All too often, black victims are criminalized in death, which thus far, hasn’t happened to the white victim on Shots Fired.

That's no accident, as co-creator Reggie Bythewood told Mother Jones that Shots Fired chose to portray a white victim because it provides the terrain to explore the differences in how victims are treated.

“I want to stress that Shots Fired is not about a black cop who kills a white kid. It's about the shooting of an unarmed white guy and an unarmed black guy,” Bythewood said. He also told Mother Jones:

“We wanted to create a narrative where we could look at both cases ... there were a lot of people who never saw Trayvon Martin as a kid. He was painted as the victimizer. And [shooter George] Zimmerman got donations from all over the country. So in doing a show that deals with police violence, the question was how do we make those people who sent in the donations see this kid as a human being?”

Shots Fired doesn’t lecture the audience about the role racism can play in police violence. Instead, the series allows the plot and its characters to be instructive in a way that lets viewers decipher their own meaning. For instance, the racialized criminality associated with black men is transferred from the forgotten victim to the police officer. As The Washington Post columnist Alyssa Rosenberg pointed out, pop culture often churns out “stories that justify and even lionize officers who kill,” crafting a narrative in which policemen are noble for killing "villains."

However, Shots Fired challenges the notion that this image extended to police officers is colorblind. When a video emerges that shows Beck saying that becoming an officer gives him permission to “kill crackers,” his police union instantly cuts legal representation. It’s symbolic of the racial limits of institutional access.

Beck is a police officer, but he is unable to access the power and privilege associated with the badge. Philip Stinson, a criminology professor at Bowling Green State University, told The Huffington Post that between 2005 and 2015, only 13 officers were convicted of manslaughter or murder after killing someone while on-duty. In 2015, no officers who killed were convicted.

“My uniform doesn’t protect me the same way it does them white boys,” Beck concludes.

Whether or not Beck is indicted, Shots Fired has successfully broached race and policing in a sensitive and nuanced way that is establishing a necessary precedent on TV. Black Lives Matter doesn't exist in a parallel universe. It's integral to our nation, and must be integral to television.

More like this
Dr. Anna Pou Is Still Practicing Medicine After Facing Murder Charges
By Brad Witter
'Children of the Underground' Subject Faye Yager Now Runs A North Carolina B&B
By Brad Witter
The 'Black Bird' Stars Are Both Heading Back To Apple TV+
By Brad Witter
'The Capture' Is Finally Back – & S2 Looks Tense AF
By Sophie McEvoy and El Hunt
Get Even More From Bustle — Sign Up For The Newsletter