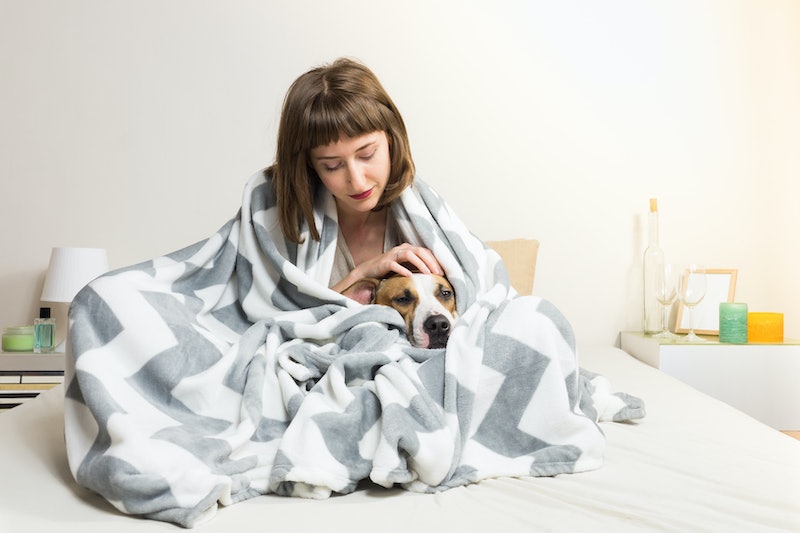 Much to my parents' chagrin, I started letting our household dogs sleep with me when I was a little kid. When I moved out and adopted my own dog, I didn't think twice about letting her sleep in my bed. And thankfully, unlike the very sad (and much-debated) "dogs don't like hugs" study, a recently published study from the Mayo Clinic showed that letting our dogs sleep with us isn't actually a bad thing.

Researchers studied 40 dogs who sleep with their owners by putting an activity monitoring device called a Fitbark on their collars, The New York Times reported. The dogs' owners all wore an Actiwatch 2, which "records people's movements and whether they are sleeping soundly or not," according to The New York Times. Human participants were also asked to keep a sleep diary.

Researchers did note that the dog's position made a difference in their human's quality of sleep, but ultimatey concluded that "[a] dog's presence in the bedroom may not be disruptive to human sleep, as was previously suspected."

As someone with generalized anxiety disorder who frequently experiences insomnia, I find that letting my dog, Jack, sleep with me is not just not disruptive, it's actively helpful. I've had nearly a dozen dogs in my life, but before I adopted Jack, who's a pit bull, I had never lived with a dog who wanted to sleep on me instead of beside me. And while I understand that a dog curling up tight to your side and putting her head on your chest or stomach may be uncomfortable for some people, for me, Jack's presence helps calm my anxiety.

It helps that she's intuitive, too; if I'm tossing and turning, or clock-watching, she'll flop on top of my legs to keep me from moving, like my very own warm, 70-pound weighted blanket. On nights when my anxiety is running high, she's happy to let me lie on my side and hug her until I fall asleep.

The fact that I'm singing my dog's praises when it comes to sleep makes me not that unusual, according to Dr. Lois E. Krahn, who is the senior author of this study and also ran a study in 2015 where she and her colleagues asked Mayo Clinic sleep clinic patients whether they owned pets. Half did, and 41 percent of those said they "perceived their pet as unobtrusive or beneficial to their sleep," while 20 percent said their pet was "disruptive," The New York Times reported.

The issue with that study, Khran told The New York Times, was that "we can't quite trust people to have an accurate report or even be able to accurately observe thir feelings for their pets. It’s sort of like a parent’s feelings for their child. I wanted to have objective data."

This recent study provides that objective data. There may be other concerns about having pets sleep with us, such as hygiene or, according to some folks, issues with dogs being more rebellious if given freedom to sleep on their humans' beds. But when it comes to dogs sharing our beds, it sounds like it may be totally OK for us to just, well, you know: Let sleeping dogs lie.