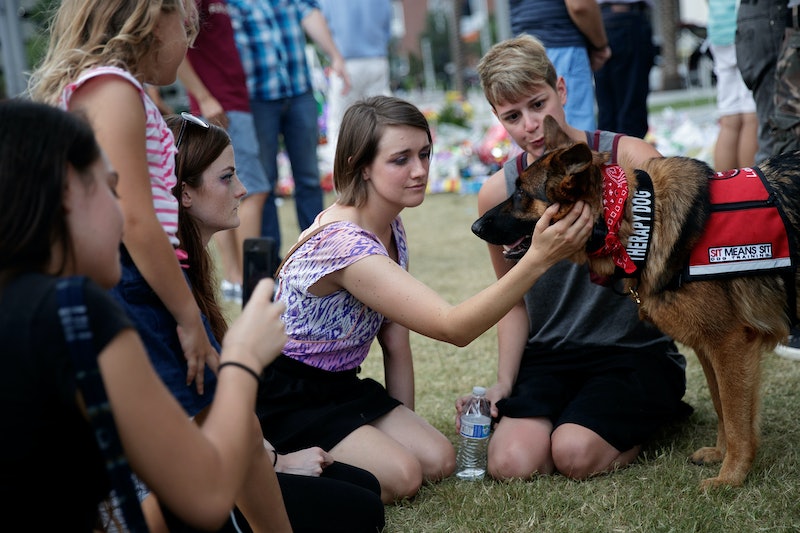 If you're a dog person, this likely won't shock you: a new study claims that college students can benefit from therapy dogs. Now, close your eyes and imagine how much more amazing your college life would have been if your school let you hang with a therapy dogs on a regular basis and, wow, this study gets even less shocking. If you recall, college life is just as stressful (if not more stressful) than adult life. The tests, the assignments, the presentations, the social pressures and the financial strains are far too real for anyone to go through unscathed by stress. For these reasons, researchers at the University of British Columbia decided to study the effects of student's interactions with therapy dogs, on a drop-in session basis.

The study, which was recently published in the journal Stress and Health, took into account the experience of 246 students, of mixed genders. The students were surveyed with questionnaires on their moods and stress levels before meeting with the therapy dogs and again right after. The sessions included 12 different therapy dogs, whom the students could cuddle, hug, pet, and talk to in whatever doggy voice they please. While the dogs were supervised and on leashes, the sessions were pretty relaxed. The students and dogs were free to faun all over each other, openly. Ten hours after the session, the students had to fill out another questionnaire to help the researchers determine just how long these good feels lasted for.

The (not-so-shocking) results? Researchers could conclude that immediately after the session, students felt a significant increase in happiness and energy, and a decrease in stress. While these results faded over time, showing gradual decrease of positive effects by the surveys taken 10 hours after the session, the results were still overall positive and conducive to improved mood and morale. Another finding that researchers at UBC were excited about was the fact that students reported feeling more socially active after their sessions. Emma Ward-Griffin, the study's lead author at the University of British Columbia says that because the effects are somewhat limited, universities should be encouraged to implement the therapy dog sessions with students only during times of increased stress. Aka, exam time.

In another study published in 2012, in the Frontiers in Psychology, called "Psychosocial and Psychophysiological Effects of Human-Animal Interactions: The Possible Role of Oxytocin" researchers explore the biochemical effects of humans interactions with animals to find that the positive effects are profound. The study attributes increased social interaction, increased trust and empathy, decreased aggression, increased learning and a positive mood to the results of an interaction between a human and an animal. Why? Researchers in this study believe that brain hormones are to thank for this chemical reaction. The study goes on to say that human interactions with dogs positively affect endocrine responses, meaning the interaction causes a change in the levels of cortisol, epinephrine and norepinephrine. Additionally, the act of petting a dog can lower stress, reduce blood pressure, improve the immune system, and slow heart rate. If you're not already convinced that dogs are the real angels on earth, let this little tidbit make it abundantly clear: spending three to 24 minutes petting a dog (particularly one you already have affection for) can increase your the amount of plasma oxytocin in your body.

Other things that trigger a significant increase in plasma OT in the human body? Oh, you know, giving birth, achieving orgasm, falling in love... you know, little things. Like I said, dogs are angels. Dogs for president. Dogs are the answer. If you're interested in learning more about interacting with a therapy dog, check out the ASPCA, and see how you can get involved with a local therapy dog program.