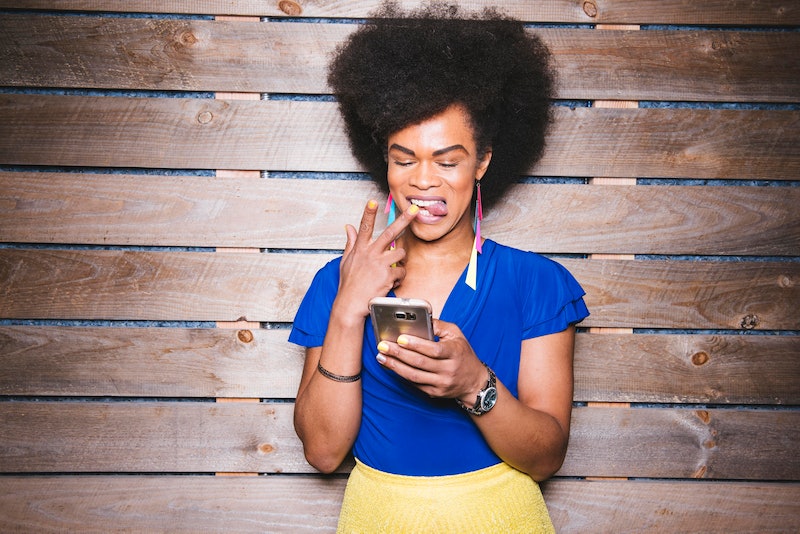 The average person touches their phone almost 3,000 times a day, according to research from Dscout. And, considering how often you put your fingers on your device, you should be cleaning your phone — like, regularly. "For the heaviest users — the top 10 percent — average interactions doubled to 5,427 touches a day," the study revealed. "Per year, that’s nearly one million touches on average — and two million for the less restrained among us," reported Dscout.

While some people are vigilant about wiping down their phones on the regular, others never clean their devices. Even if you wash your hands like a surgeon (and most people don't do this), if you touch your phone after you've toted it all over town, that hand washing is all for naught because your phone is 10 times dirtier than a toilet seat, according to a study published in the journal Germs.

Since you're probably not ever touching a toilet with your bare hands, and you're touching your phone almost 3,000 times a day, that's pretty freakin' gross. For example, if you use your phone while you're eating and then you touch your food, you're basically eating the equivalent of the bacteria from 10 toilet seats. Hopefully you're not reading this on your phone while eating lunch.

"Because people are always carrying their cell phones even in situations where they would normally wash their hands before doing anything, cell phones do tend to get pretty gross," Emily Martin, assistant professor of epidemiology at the University of Michigan School of Public Health, told TIME magazine.

"Taking a cellphone into the bathroom and then leaving with it is kind of like going in, not washing your hands, and then coming back out," Martin said. "It’s the same level of concern." Yep: Even if you wash your hands, E.coli can still be transferred to your phone. And if E. coli does end up on your phone, and then you go grab some lunch and swipe while you're eating, you're basically eating poop.

Grossed out yet? So, just how often should you wipe down your digital bestie? Philip Tierno, a clinical professor of microbiology and pathology at New York University’s Langone School of Medicine, told TIME that wiping your phone down twice a day is a good idea. Overall, the best way to avoid transferring fecal matter to your mouth — aside from not taking your phone to the bathroom with you — is to opt for tech-free meals, especially if you neglect to clean your phone on the regular. If you don't clean your phone at all, you're not alone.

Couple this with a report from Daily Infographic that reported that 61 percent of people say they regularly scroll while on the toilet, and you've got a pretty gross situation on your hands.

If you're in the never camp when it comes to phone cleaning, here's how to do it. Get yourself a pack of alcohol or antibacterial wipes and give your phone a good once over at the end of the day. Then, simply wipe it dry with a clean towel (or a paper towel).

If you don't clean your phone, you're probably going to be just fine, however it's still pretty gross. Think of it this way. Every single person is basically toting around their own personal payphone. Remember those old-timey public communication devices that made people shudder when they were forced to use one because, germs?

Now that you know that some of the stuff on your phone is fecal matter, hopefully you'll give cleaning your phone a try. If not for yourself, do it for the rest of us.

More like this
How To Protect Your Digital Privacy If You Need An Abortion Post-Roe
By Kaitlyn Wylde
6 Abortion Advocates To Follow On TikTok
By Sara Youngblood Gregory
15 Years Of The iPhone, In Pictures
By Emma Carey
How to Delete (or Pause) Your Hinge Account
By Emma Carey
Get Even More From Bustle — Sign Up For The Newsletter