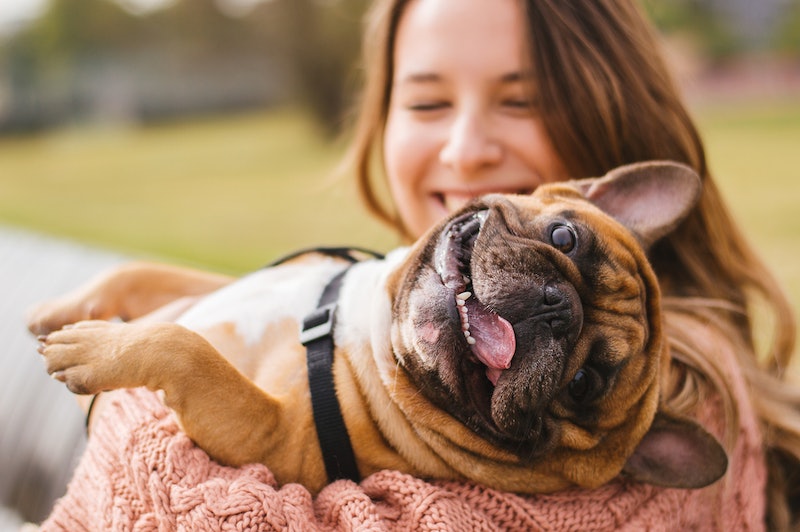 Music is super good for purposes of relaxation, escape, and of course a good boogie. I mean who doesn't love blasting the tunes? And lots of people leave some music and/or radio on when they go out because they feel that it might be good for security. Or, even better, that it might be good for their little dogs. I know right? Cant you just imagine a sweet baby angel dancing around your kitchen, singing along. However guys, should you play music to your dog?

I spoke to dog behavioural expert Sharon Jennings of The Office Dog, who knows all about what to do to keep your pooch happy as Larry. Because of this, she is just the person to ask about whether your little mate fancies some tunes or not.

Jennings tells me it's fine to play music or the radio to your dog, but there is a catch. "Radio can be good as long as there isn't too much human voice on it," she says. "So talkback radio is a no no."

OK, so probably not best to stick on anything with a load of people calling in and shouting about nonsense. Which is fair enough, I guess. I mean, I wouldn't be so keen on it either.

Jennings also pointed me towards some pretty cool research that I didn't even know existed. This research pointed to dogs being big fans of Reggae and Soft Rock. Shut the front door, put a fork in me, I'm DONE. I'll be damned that is the funniest thing I have heard all week. Your dog may be tolerating you and whatever you are listening to but, real talk, they are just waiting for you to give them the good stuff. Reggae and Rock.

The study, titled The Effect Of Different Genres Of Music On The Stress Levels Of Kennelled Dogs, was carried out by the Scottish SPCA. After trialling lots of different genres including, Motown, Pop, and Classical, as well as Soft Rock and Reggae, it appeared the music that calmed dogs down the most are the latter two. As the study explains:

"Heart Rate Variability (HRV) was significantly higher, indicative of decreased stress, when dogs were played Soft Rock and Reggae, with a lesser effect observed when Motown, Pop and Classical genres were played."

And, did you know that there are actually a production company that actually specialises in making music for your dog's needs? Yes, Relax My Dog, which was founded back in 2011 by entrepreneur Amman Ahmed and producer Ricardo Henriquez, is the absolute one for dog chill time. Speaking to the Guardian about the service, Ahmed described their thinking behind the project:

"There are a lot of medications and herbal remedies to calm pets, but I wanted to make something that was 100 percent natural, through music. We started with a team of two but now we're 12 people staffed in Manchester in the UK, El Salvador and India, and our audience is equally global. This year, we’re on track for our content to help around 15 million pets."

Guys I'm not being funny, this doesn't only relax your doggy but will relax you too.

So there you go! Chuck on a bit of Bob Marley and watch your happy pooch relax and unwind.