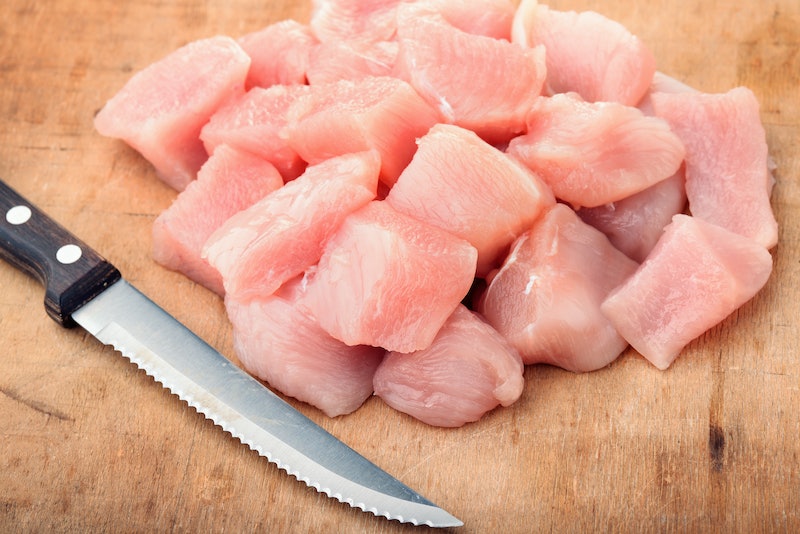 For some reason, despite not rinsing other meats, people tend to wash chicken before cooking it. But is it safe? If you're wondering if you should rinse chicken before cooking it, according to new research, the answer is a hard no. The U.S. Centers for Disease Control and Prevention just released a video that shows what happens when you rinse raw chicken in the kitchen sink, and it's hella gross.

Basically, when you rinse chicken, bacteria splashes everywhere. Even deep cleaning your sink doesn't remove all of the bacteria. And if you rinse veggies in your kitchen sink after washing chicken, you're pretty much making yourself a salmonella salad. "Do not wash raw chicken. During washing, chicken juices can spread in the kitchen and contaminate other foods, utensils, and countertops," the CDC noted on the food safety section of its website.

In a sense, it's best to treat raw chicken like something that's out to get you. The CDC advises that when shopping for chicken, you should always put the package inside of one of those disposable bags available at the grocery store before putting it in your cart. After you handle raw chicken, wash your hands like a surgeon. Use a separate cutting board for raw chicken.

In addition: "Wash cutting boards, utensils, dishes, and countertops with hot soapy water after preparing chicken and before you prepare the next item," the CDC said.

It's also important to note that chicken is one of the meats you don't ever want to eat rare. All chicken should be cooked to 165 degrees Fahrenheit. You can use a food thermometer to check. If you're served chicken at a restaurant or other food establishment that appears to not be fully cooked, send it back or just don't eat it.

According to a study published in the journal Epidemiology and Infection, poultry is responsible for more food-borne illnesses than any other meat. The study also noted that 64 percent of the time it's because people handle chicken improperly. While restaurants are responsible for most food-borne poultry outbreaks, private homes aren't far behind.

The CDC reported that while chicken is a healthy choice, "raw chicken is often contaminated with campylobacter bacteria and sometimes with salmonella and clostridium perfringens bacteria."

Campylobacter reportedly causes 1.3 million illnesses in the U.S. per year; salmonella causes 1.2 million illnesses and 450 deaths; and clostridium perfringens is responsible for more than 1 million illnesses. Washing chicken does not remove this bacteria. The only way to kill bacteria in chicken is to cook it thoroughly.

If you suspect you have food poisoning from chicken, the CDC recommends seeking medical attention if you have a fever of 102 or higher, you have diarrhea for more than three days, you have blood in your stool, or you experience prolonged vomiting. What's more, food poisoning can quickly lead to dehydration, which in turn can cause additional medical problems.

While all of these precautions might sound like a lot of hoop jumping just to enjoy some chicken, food poisoning is the absolute worst, and it's better to be safe than sorry. #TheMoreYouKnow