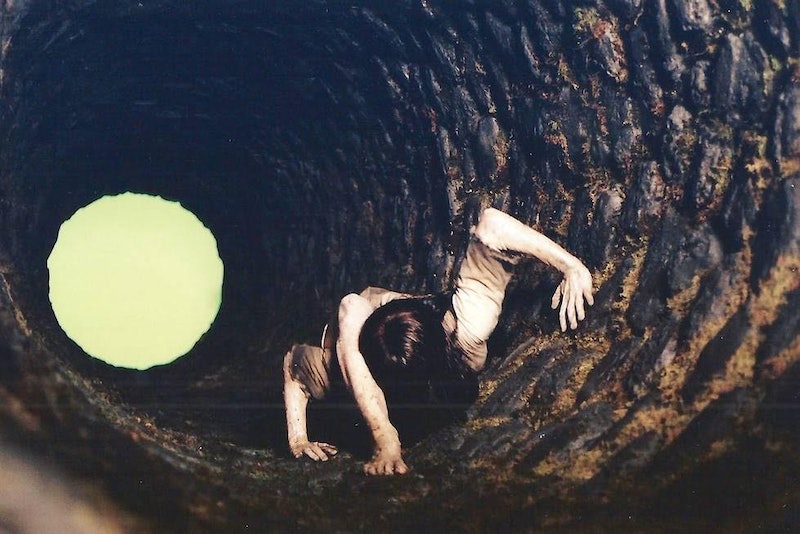 The most terrified I've ever been in a movie theater was in 2002. I was a high schooler, scared out of my wits, watching a creepy young girl crawl out of a TV screen in a movie called The Ring. Now, the terrifying franchise is back with this year's Rings, which will surely traumatize a whole new generation of high schoolers — and anyone else brave enough to watch it. But since the first movie came out such a long time ago, should you see The Ring before Rings?

It depends. If you're just looking to have a good scare at the movies, then you don't have to worry about watching The Ring before watching Rings. In fact, the new movie will probably be scarier if you've never seen the original, since all of the film's frights will feel more fresh. Also, it appears that the only returning character is the villain Samara, so it's not like you're supposed to be familiar with anyone in the film. On the other hand, if you're a big fan of the franchise and want to fully understand everything that happens in Rings, including references to the original, then you're going to want to watch The Ring first. Not only that, but it would also benefit you to watch The Ring Two, which was released back in 2005. The third installment takes place after both of these films, and it's not a reboot, so if you want the full experience you should watch its predecessors.

The new film does offer some new takes on the series, meaning it will still seem fresh to even those fans who've seen the first two films. The video that kills you in seven days has now made its way online, meaning the potential for it to spread is much greater than when it was limited to a VHS tape. The movie also seems to get into some possession horror as well, with Samara using the movie's heroine as some kind of vessel to return to the world. Here's the film's official synopsis:

A new chapter in the beloved Ring horror franchise. A young woman becomes worried about her boyfriend when he explores a dark subculture surrounding a mysterious videotape said to kill the watcher seven days after he has viewed it. She sacrifices herself to save her boyfriend and in doing so makes a horrifying discovery: there is a 'movie within the movie' that no one has ever seen before.

You probably don't have to watch The Ring, or The Ring Two, to understand what's going on in Rings, but it will definitely help. However, if you've never seen the prior two movies, don't rush out to do so. I'd recommend seeing Rings with virgin eyes, because it's going to be so much scarier that way.