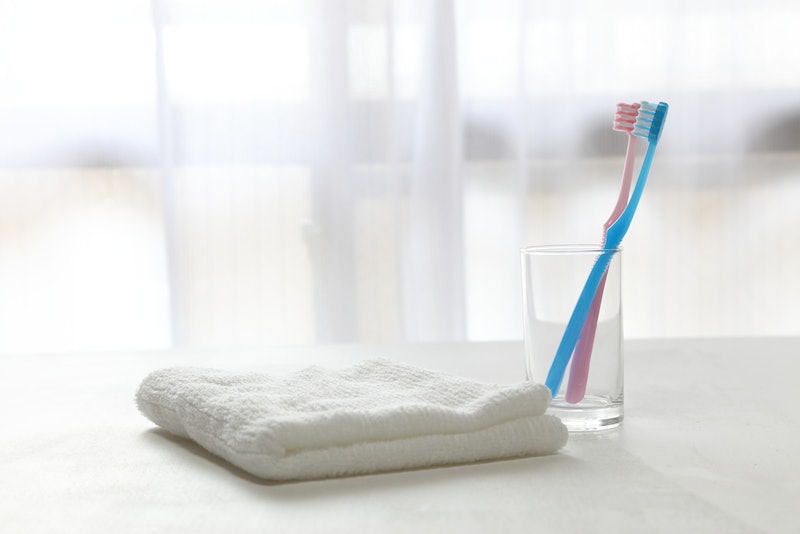 After getting over from the flu, most of us want to take a deep breath, emerge from the pile of tissues surrounding our beds, and forget the entire episode ever happened. Unfortunately, this isn’t the end of the struggle; you now have to clean all the dirty, germ-covered items and surfaces that encountered your illness, to prevent others from catching it and to get rid of that gross stale sick smell. Now is the time for bedding to go into a very hot wash, surfaces to be sterilized, and every soup spoon to be thoroughly disinfected. But should you throw away your toothbrush after being sick?

The idea of throwing your toothbrush out and just buying a new one seems fairly logical. Your saliva is pretty much *the* way cold and flu germs are spread, whether through coughing or sneezing, and in theory, your toothbrush is picking up these germs when you go to brush. However, the evidence that illnesses spread through the use of toothbrushes is actually pretty inconclusive. Dr. Neha Vyas told Health magazine that while pathogens can survive on a toothbrush, “there isn’t enough evidence in the scientific literature to show that, as a result, they cause disease in people.”

This is because of a fundamental quality of the kinds of germs that end up on your toothbrush: they’ve been living in your mouth, and consequently need a warm, wet environment to survive. That includes the flu virus, which can survive on surfaces for a maximum of 24 hours, according to the National Health Service in the UK. While a wet toothbrush can provide a reasonable home for bacteria for a few hours, over a longer period it dries out, and the bacteria die. Hence why you shouldn’t put your toothbrush in a cute little box; let it air daily in a holder after usage.

Flu transmission via saliva on a toothbrush is hypothetically possible, but technically very unlikely. While flu viruses can spread via saliva, the survival of the virus on your toothbrush is limited, particularly if you rinse it thoroughly in water after use. If you still have the flu and immediately hand your toothbrush to somebody else, allowing bacteria to enter, then they may catch it from you. But saliva can also stop bacteria being transferred from one person to another, because it carries protection from the immune system.

If you don't share a toothbrush with anyone else, which would be gross anyway, and keep your toothbrush away from those of your roommates, then you should be pretty much in the clear. For one, as we've seen, it's not likely to infect anyone else; for another, your body can't catch the same strain of flu twice in one season. The only real reason for toothbrush replacement is lowering the risk of hypothetically causing illness to others (if they haven’t got it from you already), particularly people with sensitive immune systems whose toothbrushes live in close contact with yours.

Toothbrushes are cheap and difficult to home-clean, which is why the Cleveland Clinic recommends that after you’ve experienced the flu, your toothbrush should go the way of all things anyway. “It’s an easy fix to make sure lingering bacteria doesn’t get passed on to family members. This makes a lot more sense that trying to clean your toothbrush by boiling it or by using hydrogen peroxide or vinegar,” they note.

Medical advice recommends that you should change your toothbrush at least every four months anyway, and if you have an immune condition or a serious tendency to get ill, the American Dental Association recommends changing it more often. If you just got over the flu the flu, there’s no definitive reason for throwing out your toothbrush, but if it will make you feel better and your toothbrush is due for replacement anyway, experts recommend going for it. More importantly, however, you should clean that sweater you sneezed on that one time. Yep, people will definitely notice the stain.