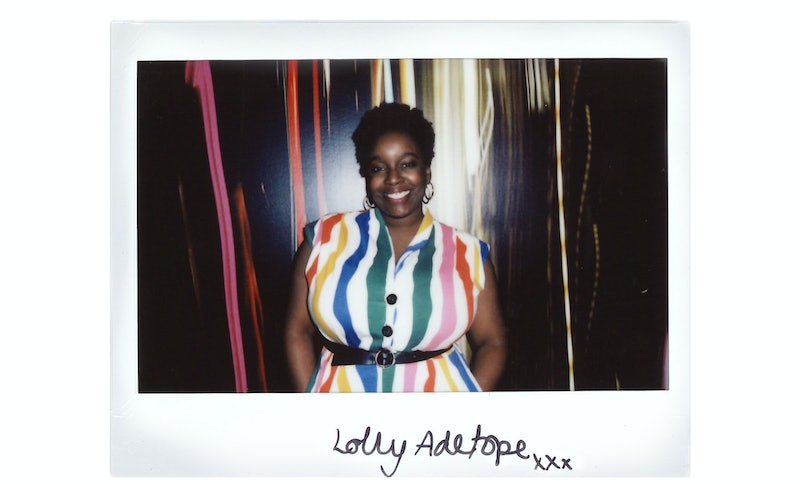 When celebrities hang out with Bustle editors, we want to give them the chance to leave their mark. Literally. So we hand them a pen, a piece of paper, a few questions, and ask them to get creative. The rest is up to them. This time, Miracle Workers and Shrill star Lolly Adefope is leaving her mark in the Bustle Booth.

Given that Lolly Adefope has made a name for herself in U.K. comedy circles playing multiple, outlandish characters in her stand up specials Lolly, Lolly 2, and Lolly 3, you'd think that playing a witty, down-to-earth hair stylist in the Portland-set Shrill would be a simple feat. But the comedian says starring in the Aidy Bryant-led dramedy felt more like an out of body experience. Adefope's lips purse slightly, like she's admitting to doing something sneaky, as she tells Bustle what it was like to play Fran, the best friend of Bryant's character Annie. "I find it hard sometimes to not be a weird character when I'm just playing a normal person. My usual characters are very odd, with strange accents. It was really hard to be normal," she says.

As much as Adefope loves playing her weird characters, the London-native, who also stars in TBS' Miracle Workers, was drawn to Shrill for its realism. She says the fourth episode is her favorite precisely because it lets women be. Set at a body-positive pool party, the whole storyline is, as Adefope puts it, "just loads of fat girls having a great time."

"And they’re not a punchline or overly sexualized," she adds, "they're just being normal people, which is what they are in real life."

That "just let things be" attitude spills over into her onscreen friendship with Bryant's Annie. "Even when [Fran] learns about Annie's insecurities and how she feels about herself, she doesn’t try to rebuff it or tell her, ‘Well, just be more confident.' She’s very realistic," Adefope says with an approving nod.

While the relationship between the two women feels natural, it actually is kind of weird to see such a normal friendship play out on TV. The women's dynamic on the series subverts almost every buddy comedy or girl power trope you can think of.

"I didn’t want it to be like the stereotypical sassy black friend who’s just screaming all the time," Adefope laughs, rolling her eyes. Too often, she says, television friendships just don't make sense if you really consider them. "When you’re that close to someone you notice all the the annoying things they do. I didn't want it to be too mean but, like... if you do have a best friend, they’re never going to be high-fiving you [like], 'You’re the best!' every single day," Adefope adds.

Judging by her knowing laugh, it sounds like Adefope and Bryant managed to turn their TV friendship into an IRL one — no high fives necessary.

Check out Adefope's answers to our Bustle Booth questionnaire below.