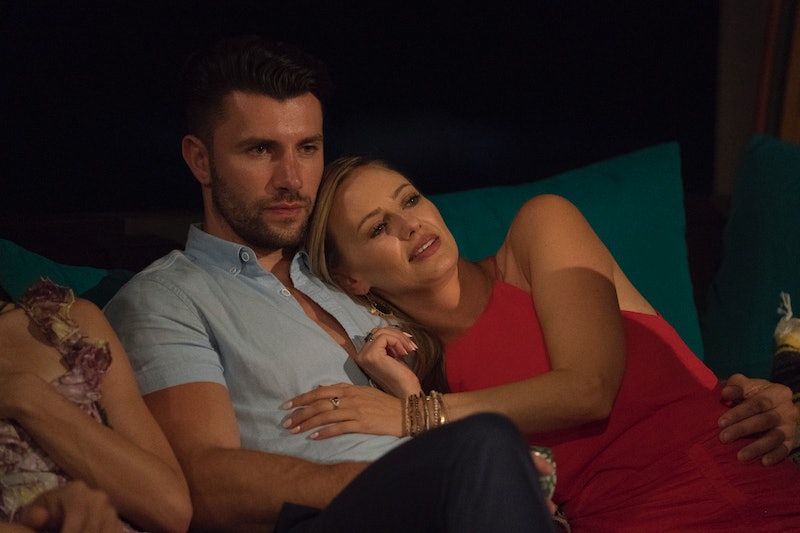 Sometimes, Bachelor In Paradise gets weird. It's mostly very noisy kissing and strange dates, but every now and then, viewers get thrown a bone. Like when Clare talked to crabs! (Remember that?.) On this season of Bachelor In Paradise, Shushanna, Annaliese, and Kamil have a weird love triangle going on, and things got even more off when Shushanna was accused of being a witch. Yes, really.

Kamil and Annaliese are decidedly a thing, and Shushanna, who just blew in as a last-minute add, seems convinced that she and Kamil are meant to be. I don't like to malign women and accuse them of being "hysterical," but the camera doesn't lie — Kamil has outwardly told Shushanna that he's not interested in her multiple times and that he's with Annaliese, but Shu refuses to hear it. Instead, Shushanna is taking the Evan and Carly route, insisting that persistence will get her the man of her dreams. Which is actually not the best way to, ever. When it comes to love, you have to just take "no" for an answer, even if it hurts.

Annaliese even tried to step in and tell Shu to cut it out with her man, and Shu was all, "Well, we almost kissed! This is complicated! We like each other." But it seems like it's not that complicated, and it seems like, as Joe knowingly put it, Shu is really into what she can't have. I said it was not great and awkward, right?

I blame romantic comedies and Bachelor In Paradise's timeline of Carly and Evan's relationship for all of this. For those that say persistence pays off, that's if you ask twice and get a "yes" answer the second time around. It's not when you trick someone into dating you. Evan wore Carly down to go out with him, but why didn't he just respect her wishes and back off? She didn't want to date him. Yes, this relationship worked out in the end, but why do we teach men to break down women until they do what men want? It's the opposite for Shu.

Here, she is doing the attempted breaking down, as if Kamil is a man who doesn't know what he wants. How about we trust his decision-making skills and just recognize that he wants to be with Annaliese? If it was Kamil refuses to hear Shushanna's wishes, Bachelor Nation's feminists would be up in arms. This shouldn't be any different just because the pursuer is wearing a bikini and not a pair of plaid swim trunks.

Things took a very bizarre turn when Kamil jokingly accused Shushanna of being a witch, because she was constantly staring at Kamil, most likely bidding him to be with him. This is dumb and silly, and it rightfully hurt Shu's feelings, so maybe this shouldn't have been a whole plot line. Shu dramatically burned a picture of Kamil that producers probably gave her, drawing the whole thing out. Sometimes, this show is really, really taxing.

Shushanna is not "crazy." To call a woman hysterical or nuts or a witch because she has a brain and feelings is irresponsible and wrong. But Shushanna needs to recognize that Kamil isn't into her, and he doesn't want to date her. Instead of focusing on Kamil and what she can't have, Shushanna should have gone out with Jordan or Diggy — you know, the guys who actually wanted to spend more time with her. Shushanna's insistence on creating a love triangle hurt no one but herself in the end.

This article was originally published on Sep. 5, 2018