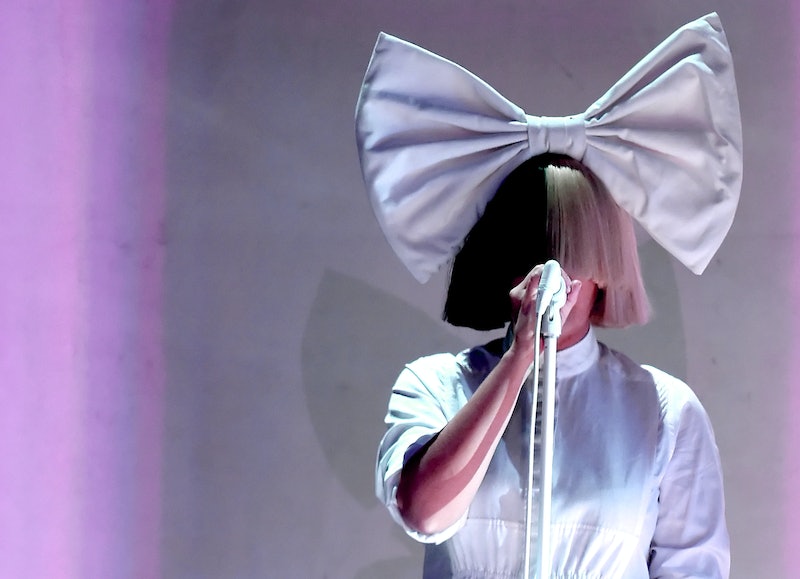 Despite her usual privacy, Sia shared a personal message about her health with all of her fans and followers on Friday, Oct. 4. In a post on Twitter, Sia revealed she experiences chronic pain due to Ehlers-Danlos syndrome, a disorder that affects connective tissue and causes weakness in the joints, skin, and blood vessel walls. "I just wanted to say to those of you suffering from pain, whether physical or emotional, I love you, keep going," the singer wrote on Twitter after revealing her diagnosis. "Life is f*cking hard. Pain is demoralizing, and you're not alone."

According to the Mayo Clinic, people who suffer from Ehlers-Danlos syndrome often have "overly flexible joints" and "stretchy, fragile skin," which can result in frequent injury, joint dislocations, and issues with wounds requiring stitches, as the skin is often too weak to hold them.

The National Institute of Health reports that there are 13 types of Ehlers-Danlos syndrome, symptoms of which can range from "mildly loose joints" to life-threatening conditions like the potential for rupturing blood vessels. While Sia did not reveal which type of Ehlers-Danlos she experiences, most types cause chronic pain due to to affected individuals having "hypermobile" joints and weak connective tissue.

After her initial tweet on Friday, Sia also posted on Sunday, clarifying her condition. She explained she has both a neurological disease, as well as Ehlers-Danos. Her initial message sparked some backlash and confusion, as some believed she was incorrectly stating EDS is a "neurological disease" due to the comma placement in the sentence.

Sia has been well-known for wanting to keep parts of her life private, which includes wearing her famous, face-obscuring wig to almost all public events. But the singer spoken publicly about her personal struggles over the years, from substance abuse to mental health. "All I wanted to do was write for pop stars. For one reason or another it never happened for me," Sia revealed in a 2013 interview with Billboard, explaining that her addiction kicked off after she was misdiagnosed with a thyroid issue. "Then I got seriously addicted to Vicodin and Oxycodone, and I was always a drinker but I didn't know I was an alcoholic. I was really unhappy being an artist and I was getting sicker and sicker."

Sia said the misdiagnosis was later corrected and she received the proper treatment for her hyperthyroidism. After that, she was able to get the help she needed and become sober. In 2016, the singer told James Corden on The Late, Late Show that her decision to wear her famous wig was a result of her experience with addiction. "I was an alcoholic and a drug addict, and I sobered up and decided I didn't want to be an artist anymore because I was starting to get a little bit famous, and it was destabilizing in some way," Sia said at the time. "So I thought what doesn't exist in pop music at the moment? And it was mystery."

In addition to her experience with substance abuse and chronic pain, Sia also told Rolling Stone in 2018 that she has Graves disease, an autoimmune disorder that is often caused by intense, prolonged stress. "The music business was essentially killing her," Sia's manager, Jonathan Daniel, told the outlet in the same interview. The feature revealed that she decided to take a step back from the spotlight to focus on songwriting and making the kind of pop music that she enjoys. That seemed to help Sia have the career she wanted without the industry taking a toll on her health.

Sia may want to keep her face out of the spotlight, but the singer seems to be open with her fans about her experiences with substance abuse and her newest revelation about her chronic pain.

Editor’s note: This piece has been updated to identify Ehlers-Danos Syndrome as a connective tissue disorder.

More like this
Lily Allen Was “Quite Emosh” After Performing Sober At Glastonbury Festival
By Stephanie Topacio Long
Here’s How Lizzo Is Supporting Abortion Rights After The Roe v. Wade Reversal
By Brad Witter
Travis Barker & Kourney Kardashian’s Updates About His Health Are Promising
By Stephanie Topacio Long
Victoria Beckham Spoke Out About Being Weighed On Live TV After Giving Birth
By Frances Stewart
Get Even More From Bustle — Sign Up For The Newsletter

This article was originally published on Oct. 5, 2019