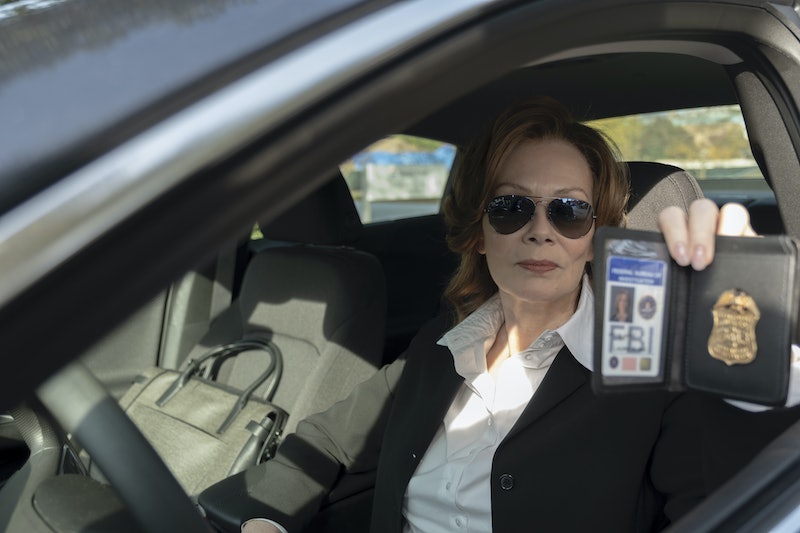 Spoilers ahead for HBO's Watchmen. After two episodes of world-building and introducing audiences to new characters, the third episode of HBO's newest series expanded the world a bit more, bringing a named character from the original source material for the first time. Jean Smart plays Silk Spectre on Watchmen… but you might not know that if you haven't read Alan Moore's and Dave Gibbons' 1986 graphic novel of the same name, considering nobody in the episode ever calls her that. Rather, Smart's character is simply referred to as Laurie Blake — signifying that she's come a long way since the '80s.

Technically, prior knowledge of the graphic novel isn't necessary for watching Watchmen the TV show, but it can help provide context in situations like this. While Laurie may have seemed like another of Lindelof's original creations, she actually has a rich history in the text, which makes her character even more compelling if you're aware of it — both in the ways her character has remained the same and, even more potently, in the many ways she has changed since the events of the original story.

If you haven't read the graphic novel (or if it's been a while since you have), here's everything you need to know about Silk Spectre, and how those facts inform our understanding of the character she's become.

1. Her Mom Was The Original Silk Spectre

Watchmen, both the graphic novel and the television series, are works deeply concerned with history and the impact of one generation on the next. Nowhere is this impact more literal than with Laurie Juspeczyk, who assumed the title of Silk Spectre from her own mother, Sally Jupiter. Sally was a member of the original group of masked vigilantes known as the Crimebusters, founded in the 1950s and featuring such "heroes" as Hooded Justice, The Comedian, Nite Owl, and more.

In the graphic novel, Laurie was part of the younger generation that found itself shaped by the legacy of its predecessors; now, 30 years later, the HBO series finds Laurie suddenly a part of the older generation, watching as the legacy of her actions back in the '80s reverberates through the up-and-coming era of masked vigilantes like Sister Night, Looking Glass, Red Scare, and Pirate Jenny.

2. Her Dad Was The Comedian

Midway through the graphic novel, Laurie learns the shocking truth about her parentage. Laurie always knew that the man who raised her, Laurence Shexnayder (Sally's husband and manager), wasn't her real father. Although her father never told her the identity of her dad, Laurie grew up assuming it was Hooded Justice, who was rumored to have had an affair with her mother when they were both in the Crimebusters, having protected Sally when their chauvinistic colleague The Comedian (aka Edward Blake) attempted to sexually assault her.

When confronted with her own memories by Dr. Manhattan, Laurie is finally faced with the truth that she so long tried to suppress: Blake was her father. Her mother had gone back to — even fallen in a twisted sort of love with — her own abuser, and they'd had a child together. Although horrified by this revelation, Laurie appears to have come to terms with it, given that she's given up her mother's name and now goes by the last name of her formerly detested father.

3. Her Boyfriend Was Dr. Manhattan

Pushing her reluctant daughter to assume her mantle, Sally took Laurie to a meeting where former Minutemen leader Captain Metropolis was attempting to convene a new group of masked heroes he called the Crimebusters. The group never came together, but the meeting was important in another way: it's where Laurie first met Dr. Manhattan and the first sparks of attraction flew. The pair operated as partners for a time, until masked vigilantism was officially outlawed by the Keene Act of 1977; after that, the two attempted to live a domestic life together, although Laurie quickly grew impatient with Manhattan's cold, emotionless demeanor.

Eventually, Laurie left Manhattan, which was part of a chain of events that led the superbeing into abandoning Earth for Mars. (She briefly managed to convince him to return to Earth to help her try to stop Ozymandias; but when that failed, he left the planet for good.) Laurie's phone booth conversation in Episode 3 is filled with years of history, pain, resentment, and, yes, love. It's also framed in the form of a joke, which is apparently another thing she picked up from her father, in addition to his last name.

4. Her Lover Was Nite Owl

After she left Manhattan, Laurie struck up a relationship with another almost-member of the never-assembled Crimebusters: Dan Dreiberg, aka Nite Owl (who had assumed that mantle from his mentor, Minutemen member Hollis Mason). As the new couple returned to vigilantism together — busting thugs, saving people from burning buildings, breaking their colleague Rorschach out of prison — their passion ignited and they fell deeply in love.

30 years later, Laurie Blake is now a federal agent, while Dan Dreiberg is apparently locked up in jail, presumably for violating the Keene Act. Why he's imprisoned and she's not just free but working for the government, is something of a mystery. What exactly happened between Laurie and Dan will surely be explored in subsequent episodes.

As far as is known, Laurie is the only non-powered character to have left Earth, having been transported to Mars briefly by Dr. Manhattan for an emotional chat. While on the red planet, Manhattan used his powers to wrap Laurie in some sort of aura that protected her from the elements and allowed her to breathe. While riffling through her memories, Manhattan uncovered the truth of Laurie's origins. He viewed her conception as a miracle — only one egg and one sperm could have given rise to the woman he loved, out of nearly infinite possible combinations — which he took as inspiration to return to Earth in an attempt to save it.

I say Laurie's the only person other than Manhattan to have visited Mars "as far as is known," because a popular fan theory about Watchmen the TV show is that Ozymandias isn't in some castle on Earth at all, but rather is trapped in a prison built for him on Mars by Dr. Manhattan in an effort to keep the genius billionaire from killing further millions of people.

6. She Helped Cover Up The Truth About Ozymandias

Speaking of Ozymandias and his evil plan, Silk Spectre (along with Manhattan, Nite Owl, and Rorschach) is one of the only people on Earth who knows the truth about the squid attack that decimated Manhattan. Although the apparent alien invasion managed to unite humanity and put an end to the Cold War, Laurie knows that it was a hoax perpetrated by businessman Adrian Veidt (aka Ozymandias). When Rorschach refused to keep the truth a secret, Manhattan killed him in order to preserve the peace that Veidt's horrific attack had built. Laurie and Dan also agreed to cover up the truth, becoming complicit in the murder of millions of innocent people.

Before Rorschach died, he left behind a journal detailing Veidt's plan; and although it was ultimately discovered, few believe its authenticity, and a fragile peace has remained in place. Some of those "few" who do believe it, though, are the Seventh Kavalry, who have molded themselves in Rorschach's image. The toll that keeping such a huge secret for over three decades — and of watching the truth give rise to a new wave of violent fascism that threatens to destabilize the peace she lied to protect — has clearly turned Laurie into an embittered, cynical version of her former self.

7. She Headed Off Into A Life Of Vigilantism

After watching millions murdered by Ozymandias and standing by while Manhattan killed Rorschach, Laurie and Dan gave up their former lives and went into hiding. The last time they're seen in the graphic novel, they're paying a quick visit to Sally, introducing themselves under the fake names of Sam and Sandra Hollis. As they leave Sally's home with her mother encouraging them to have children, Laurie (now Sandra) tells Dan (now Sam) that children can wait: she plans to resume her career as a vigilante… with some changes. She wants to change her name (Silk Spectre is too "girly," she says) and she wants to alter her costume to be more practical — less spandex and more leather, with an identity-obscuring mask.

What came of this renewed career in vigilantism is still unclear… beyond the fact that it apparently led to Dan's imprisonment. Something along the way clearly disillusioned Laurie, turning her against masked vigilantes to the point where she now makes a career out of apprehending and arresting them. She's even distrustful of those like Sister Night who are allowed to disguise their identities while operating under the protection of the law. Something happened to Laurie in the 30 years since the graphic novel ended. But what?

In typical Damon Lindelof fashion, every answer raises even more questions. Fans may have gotten their first glimpse at what became of Silk Spectre after the final pages of Watchmen… but that answer came pre-loaded with plenty more mysteries to keep viewers intrigued for weeks to come.